With diners staying indoors in fear of the pandemic, Yum China Holdings, Inc. (YUMC) has witnessed a double-digit percentage sales decline. Despite the easing of lockdowns, the sales are yet to reach the pre-pandemic level. While the post-pandemic economic challenges can squeeze consumer spending and drag the sales growth, the infection control measures could narrow the margins, making a quick recovery unlikely. Meanwhile, investor concerns are growing over China-based firms, and the U.S. Senate has passed a bill tightening regulatory oversight. Even though the close ties with the U.S. partner make a delisting unlikely, a dual-listing structure will dilute the ownership and EPS as share buybacks remain suspended.

Yet, the stock, in terms of the NTM EV/EBITDA multiple, trades at a premium to the past year average, which indicates an overvalued stock based on our EBITDA forecasts for the NTM period. However, with a robust balance sheet to power the acquisition-led growth even through the downturn, YUMC deserves a ‘Hold’ strategy in our view until the political tensions ease.

Despite an early recovery in China from the COVID-19 pandemic, China-based YUMC is yet to outperform its U.S. peers. It even lags the broad category of Chinese stocks available for foreign investors. While the company is struggling to recoup its lost sales after the pandemic, the effects of a recent legislative change inimical to Chinese firms has spilled over to its U.S. listed shares. The stock’s underperformance to both the Dow Jones Restaurants & Bars Index (DJUSRU) and the SPDR S&P China ETF (NYSEARCA:GXC) highlights the twin risks. YUMC has dropped ~9.1% YTD (year-to-date), while DJUSRU and GXC have lost only ~8.3% and ~7.5%, respectively. 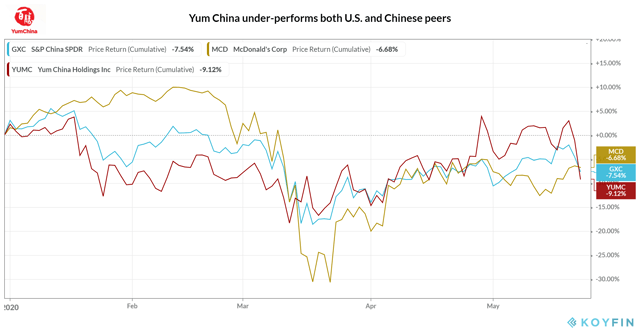 With YUMC operating primarily in China, the U.S. audit watchdog PCAOB (the Public Company Accounting Oversight Board) is unable to fully review its audit documentation. Last month, the head of the U.S. Securities and Exchange Commission cautioned investors to avoid such pitfalls as they invest in emerging market companies. Following the accounting scandal in Luckin Coffee Inc. (LK), the U.S. authorities are starting to crack down on such regulatory loopholes.

According to a bipartisan bill passed in the Senate last week, if PCAOB is unable to access a foreign issuer’s audit reports for three consecutive years, the company risks delisting from the U.S. stock exchange. Coming in the wake of a decision by the U.S. government to halt a federal pension fund from making investments in Chinese firms, the recent developments have fueled investor concerns over the their financial transparency. As the post-pandemic consumer behavior continues to ravage its sales growth, are those concerns adequately factored in YUMC’s current valuation?

After three consecutive years of sales decline prior to the pandemic, the pandemic couldn’t have come at a worse time for YUMC. With China being the first country to be hit by the contagion, the sales drag due to lockdowns has been sharper in YUMC, impacting the performance throughout Q1 2020 (the first quarter of 2020). The system sales, same-store sales and total revenue had all declined by double-digit percentages during the quarter. At the peak of the outbreak in mid-February, 35% of the outlets remained closed and the comps had dropped by 40-50% YoY (year-over-year) during the Chinese New Year period. As the lockdowns eased in March, the impact became less pronounced with comps falling only ~20% YoY by late March, and as of April-end, the comps decline stood at ~10% with 99% of outlets open. While the dine-in reliant Pizza Hut saw a comp decline of ~31% YoY, the KFC unit, accounting for ~79% of company sales, lessened the strain on sales thanks to its off-premise business which limited its comp decline to ~11% YoY. 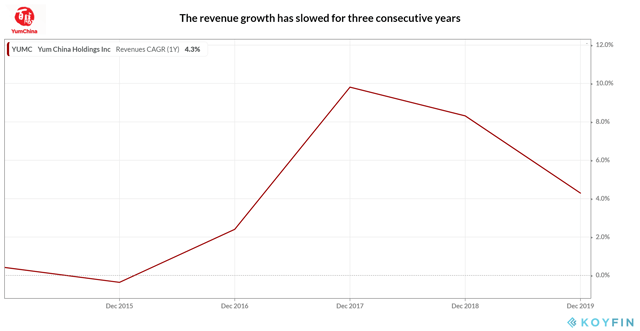 Despite a recent slide in new cases, the virus fears continue to haunt Chinese diners and the authorities keep the country in a war footing amid the warnings by the experts of a second wave of infections. As the social distancing measures remain in place with restrictions on travel and a lull in business activity, YUMC’s sales volumes and consumer traffic have yet to reach the pre-pandemic level. Meanwhile, for the first time in quarter of a century, China has scrapped the yearly GDP target citing economic uncertainty ahead. Even before the pandemic, consumer spending was under pressure. The real per capita disposable income for 2019 grew 5.8%, the slowest pace since 2013. Drawing parallels to the SARS outbreak in 2003, Chinese GDP growth slowed from 11% in the first quarter to 9% in the second. With China’s fiscal stimulus being more limited compared to certain Western nations, a faster turnaround in GDP growth is unlikely, and therefore, the pressure on consumer spending will continue to delay YUMC’s sales recovery. Meanwhile, the Chinese currency is hitting record lows amid the trade tensions. Last Friday, the offshore Yuan fell to a two-month low while the U.S. dollar recorded back-to-back weekly gains. A weaker domestic currency will worsen YUMC’s poor sales performance reported in U.S. dollars. Assuming the sales recovery to take place only from 2H 2020 (the second half of 2020), we expect YUMC’s revenue growth for the NTM (next-twelve-month) period to decline or remain flat. Projecting ~$8.1-8.3 billion in sales for the period, our NTM growth forecast ranges from approximately -1.4% to +0.6%.

READ ALSO  Ghislaine Maxwell Arrested, May Be Sent To Same Jail Where Epstein 'Killed Himself'

Despite gross profits falling more than 50% from the year before, one-off cost benefits have kept YUMC’s Q1 2020 operating margins positive. However, in our view, the company, relying on low-margin value deals and delivery business to drive sales, will not be able to maintain the EBITDA margin that averaged ~15% over 2016-2019. The added costs of employee safety and workplace hygiene to contain the infection in a post-pandemic setup could push the overheads higher even though the company is unlikely to pass the cost burden to the price-conscious consumer. Furthermore, the rising commodity inflation will hit the restaurant margins and the loss of current cost benefits from 1H 2020 could narrow the operating margins. Assuming ~11.9% to ~13.9% of margins, we forecast ~$1.0-1.1 billion of EBITDA for the company for the NTM period. 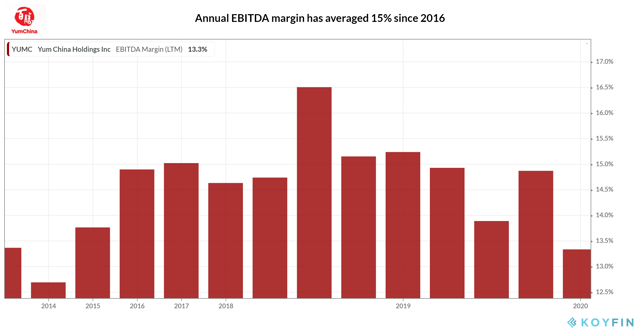 As an industry running on thin margins, the fast food sector is highly vulnerable to sales fluctuations. Hence, the importance of a clean balance sheet to fight a crisis of this magnitude. Despite being a capital-heavy business, where ~80% of the total outlets are company-owned, YUMC has a well-managed balance sheet compared to its asset-light U.S. rivals. Therefore, the company could afford to keep its expansion plans for 2020 intact as evident from the unchanged targets for gross openings and capex for 2020. 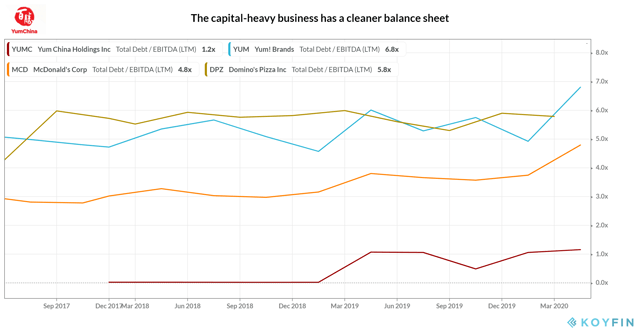 However, after going through two consecutive quarters of negative cash flows, YUMC has paused the dividends for the next two quarters and suspended share buybacks indefinitely. The decision looks prudent amid the sliding sales as the two components made up ~74% of the company’s cash flows in 2019 compared to ~38% in 2017. Having just concluded the acquisition of Huang Ji Huang, a casual-dining brand with over 640 outlets globally, the company, thanks to the robust balance sheet, looks more poised for an acquisition-led growth as the pandemic cripples weaker rivals. 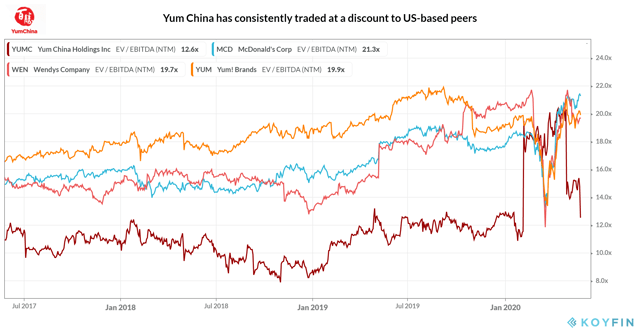 A Premium Despite the Challenges

In terms of NTM EV/EBITDA, YUMC currently trades at ~12.6x with a premium of ~9.8% to the pre-pandemic average of ~11.5x in the year 2019. With the recent political changes heightening YUMC’s near-term valuation risk, we assume the latter for our relative valuation which, along with the above EBITDA forecasts for the NTM period, suggests an overvaluation of ~30.7-16.7% for the stock. However, the company may not be an outright ‘Sell’ as the company counters the regulatory pressure.

First of all, in an election year in the U.S., the criticism against Chinese firms could be just the political rhetoric. A possible delisting could impact its market liquidity and hurt the share price, even though the risk is low for YUMC given the master license agreement with its former U.S. parent Yum! Brands, Inc. (YUM). However, the Chinese tech giants from Baidu, Inc. (BIDU) to JD.com, Inc. (JD) are already making a beeline for a dual listing in Hong Kong, an idea considered by YUMC back in last January. The rival exchanges will be more than happy to welcome the exiting Chinese firms which for years failed to attract a premium valuation given the heightened regulatory risk. Furthermore, the listings closer to home could attract steep valuations from domestic investors who will be more comfortable with the accounting standards and the level transparency of the local firms. However, in the event of a potential dual listing, YUMC’s per share earnings could suffer as it has already suspended the share buybacks.

The U.S. regulatory scrutiny over locally-listed foreign firms just got tighter. With PCAOB unable to review its audits, pandemic-battered YUMC looks particularly vulnerable. Even though a U.S. delisting is unlikely given its strong ties with the former parent, a dual listing could dilute the ownership and EPS given the suspended share buybacks. Yet, in terms of NTM EV/EBITDA, YUMC trades at a premium to the past year average, which, based on our EBITDA forecasts, suggests an overvalued stock. Having a robust balance sheet to power the expansion even through a pandemic, YUMC, however, deserves a ‘Hold’ strategy until the political dust settles.

If you enjoyed this article and wish to receive updates on my latest research, click “Follow” next to my name at the top.