We wrote about YRC Worldwide (YRCW) last January where we assessed its long-term potential. We indicated in that article that the company’s technicals were pointing to a bottom and that shares were trading at an incredibly cheap valuation. Fast forward a little over 10 months and shares have more than doubled (115% gain) to currently stand at just over $6 apiece.

We also stated in that January article that there was no rush in getting long the stock. Many investors have tried to pick a firm bottom in YRCW for 5+ years but have failed, as shares continued to make lower lows until they found a firm bottom in early 2020. Recent share price traction, though, has resulted in shares not only trading above their 10-week moving average but also above their 10-month moving average. Considering the momentum YRCW has now gained, we believe shares will easily reach the 50-month moving average soon, which is approximately $7.57 apiece. 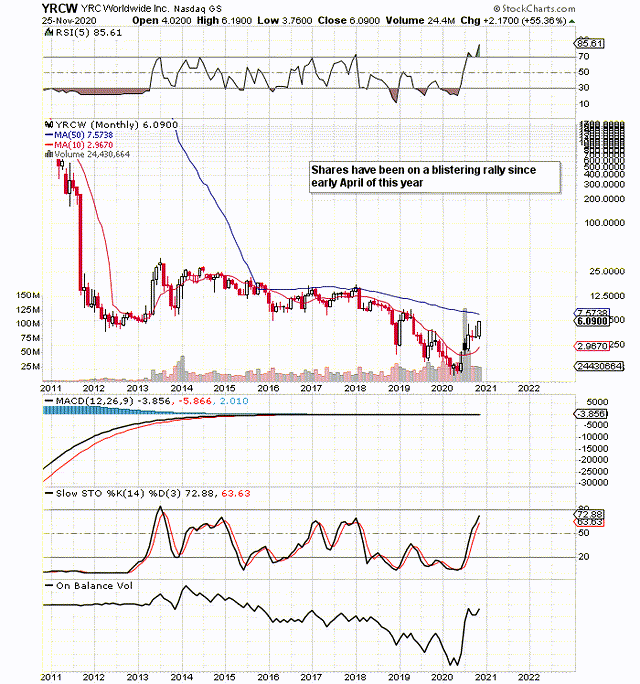 The real spike, though, took place in early July. As we can see from the chart below, shares formed a breakaway gap on very strong volume. They followed on to generate a “fake” double top, as just recently, they have broken out. As mentioned above, this is why we believe shares will get to at least the $7.57 level if the breakout holds. 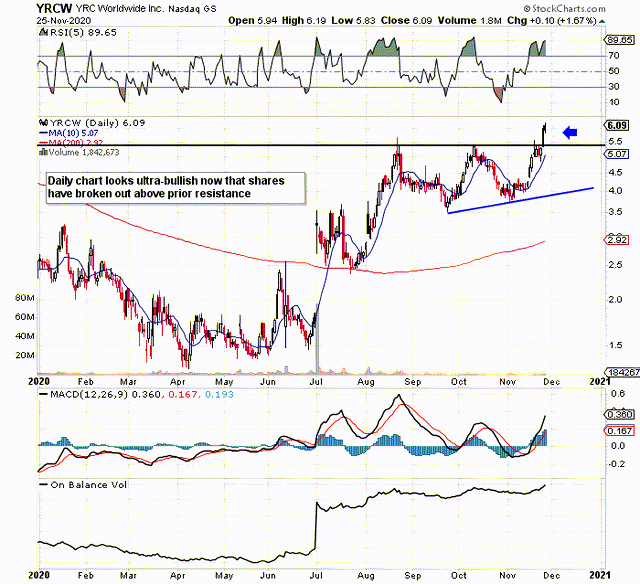 What investors really want to know however is whether YRC Worldwide can go on a sustained multi-month rally, which would bring shares back into strong double-digit numbers. From a valuation standpoint, the potential is certainly there. Shares are trading at a sales multiple of 0.07 at present over a trailing twelve-month average and with a cash/flow multiple of 2.74. Value investors will no doubt bemoan the fact that the balance sheet continues to report negative equity and the transportation firm is still not profitable from an earnings standpoint.

However, it is very rare to find companies whose sales are as cheap as YRCW with ample equity and earnings. The company still managed to generate $117 million of operating cash flow over the past four quarters from a net income total of -$50 million over the same time frame. Cash/flow is really the trend investors should be looking at, as YRCW’s operating cash flow breaks down how well it has been generating cash.

Followers of our work will know that we are all for companies which can generate cash to enable the growth of investments to take place quickly. YRCW’s assets are what will essentially generate the earnings and cash/flow growth going forward, and the firm is definitely doubling down in this area. In the recent third-quarter earnings report where earnings per share almost came in positive (-$0.03 which was a substantial beat), management touched on its investment objectives going forward.

The $700 million loan from the US treasury will go a long way in enabling the firm to acquire trailers and tractors, as well as to look after staff in the pension and health segments. Investment won’t stop there, however. Higher volume will mean that the company will have to double down on its people (more drivers) and get better technology and equipment. From an investor’s standpoint, these investments over time should see a strong uplift in the amount of assets on the balance sheet and, consequently, earnings. In fact, earnings are expected to come in at -$0.08 in 2021, which would be a 96% increase over the expected bottom line this year, if met.

Cash came in at $434 million at the end of Q3, and the current ratio came in at 1.45. This is a relatively good number and demonstrates that there is no risk to liquidity at present. Approximately $880 million in interest-bearing debt was reported at the end of Q3 on YRCW’s balance sheet. The company’s present market cap is $324 million.

Therefore, here is how we would sum up YRC Worldwide from an investor’s standpoint. Although debt has been increasing at the firm, the assets have been outpacing its debts. Equity actually increased by $143 million in the third quarter, and now only is $323 million from being in positive territory. Suffice it to say, even with leverage rising, as long as YRCW can stay ahead of the curve, the market should continue to favour this stock. To control risk, a trailing stop may be the preferable option in here. We may put something on in here shortly.

Disclosure: I/we have no positions in any stocks mentioned, but may initiate a long position in YRCW over the next 72 hours. I wrote this article myself, and it expresses my own opinions. I am not receiving compensation for it (other than from Seeking Alpha). I have no business relationship with any company whose stock is mentioned in this article.