You Can’t Have A Sucker’s Rally Without Foolish Buyers

There is a quote from a book entitled Bleeds My Desire by Nenia Campbell which talks about how power can be a fickle mistress.

Power is a fickle mistress, easy to seduce, but even easier to lose. That’s how it works. One moment she is your closest confidant, whispering the secrets of the universe into your ear; the next, she is your vilest oppressor-and once her ears close to your plights you are well and truly screwed.”

After reading her quote, it dawned on us that there is another seductive force that holds the same powerful grip over humanity – the power of money. Just re-read the above quote and substitute the word money for power. Agree?

Throughout history, there have been stories of fortunes made and fortunes lost on Wall Street. Often referred to as “the canyon of dreams”, there is a famous artist by the name of G. Harvey whose modern work bears that same title. 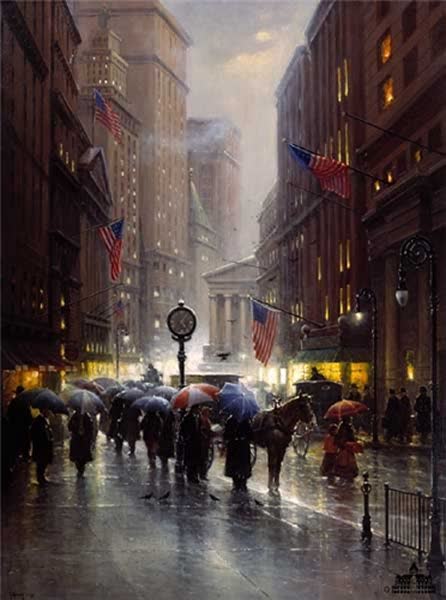 There certainly is something romantic about Wall Street, but there is also something sinister, at the same time.

As a young Registered Representative eager to make my fortune on Wall Street, I fell prey to the powerful grip of this fickle mistress.

My early successes, as a young stockbroker, in the field of trading and investing, made me feel a sense of being invincible. Furthermore, it made me believe (falsely, I might add) that I was smarter than I actually was.

Yes, I found that it is true that “pride goes before a fall”.

Today, I wouldn’t trade those humbling experiences for anything in the world because it was those early lessons, born out of failure, that taught me how to respect risk in the financial markets.

One of my early mistakes was the use, or should I say over-use, of leverage in my stock positions. Margin cuts both ways. It’s great when you are on the side of a winning trade, but it is devastating, both emotionally and financially when you are in a losing position.

We are seeing a lot of novice investors today, who are relatively new to the financial markets. Their cocksure attitude is something that we can certainly relate to from our own years of experience in the stock market.

These neophyte investors can choose one of two ways to earn their stripes on Wall Street. The first is to learn by your own mistakes, as we did. The second is to learn from the mistakes of others. The first option is the most costly but carries with it a much stronger psychological imprint on the investor’s mind.

The problem for many investors today is that they have grown accustomed to the seductive charm of living through a bull market super-cycle that dates all the way back to August of 1982.

Not that there have not been corrections and bear markets along the way over this 38-year stretch, but the takeaway for many has been that if you just buy the dips, over time, you will make money.

Getting your so-called sea-legs, as it were, requires that you go through some rough waters. For many investors today, the stock market calm has only been briefly interrupted by a few squalls, every now and then.

To those investors, we say, don’t be fooled into thinking that what we have seen in the past few months will quickly pass and it won’t be long until we return to the blue skies and sunshine of another bull market.

What we have witnessed, to date, is one of the greatest extraneous events in the past 100 years. Something of this magnitude doesn’t go away quickly or easily. The scars will remain on many of us for a very long time.

The COVID-19 virus shock has done almost irreparable damage to both the economy and the financial markets, which will take years to recover from.

We are not going to see a “V”-shaped recovery, as some would have you believe. In today’s news cycle, that hopeful narrative may play well for President Trump and Treasury Secretary Steve Mnuchin’s agenda, but it is hardly realistic to expect that things will get back to “normal” (whatever that now means) within a month or two.

Some investors appear to be drinking the Administration’s Kool-Aid, while others, quite frankly, are guzzling it.

If we are lucky and we don’t see a second wave of the coronavirus emerge in the fall and winter months of 2020, as some are predicting, we will still have a long and arduous path to economic recovery.

If we do experience a second wave, it is likely that a depression will ensue and any meaningful recovery will be elusive for many years.

We would ask readers to give some serious thought to what took place in the Japanese economy and the Nikkei stock market average over the past 20+ years. 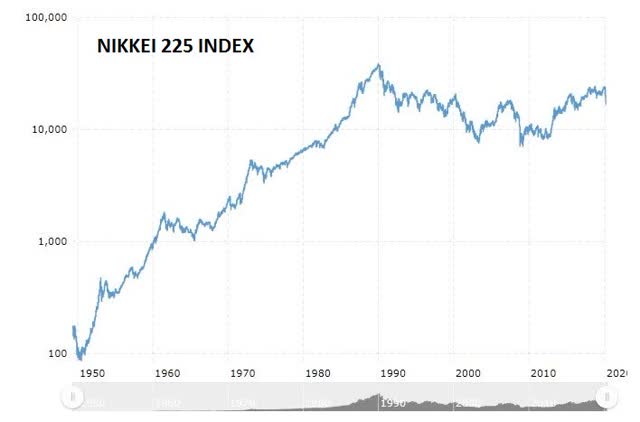 The Bank of Japan followed a path of systematically lowering interest rates, to stimulate the Japanese economy. The Nikkei 225 stock market average peaked on December 29, 1989, at 38,915.

Today, over 30 years later, the Nikkei 225 has yet to regain its former glory and has effectively been in a 30-year bear market, as the Japanese economy has muddled along.

We would note a striking similarity in that Japanese investors also experienced a stock market super-cycle of some 39 years from 1950 to 1989. The parallels between these two countries, economies and markets should not be ignored.

Ruchir Sharma, the Chief Global Strategist for Morgan Stanley had this to say in a Fortune Magazine article from August 2019.

In this environment, cutting rates could hasten exactly the outcome that the Fed is trying to avoid. By further driving up the prices of stocks, bonds and real estate, and encouraging risky borrowing, more easy money could set the stage for a collapse in the financial markets. And that could be followed by an economic downturn and falling prices – much as in Japan in the 1990s. The more expensive these financial assets become, the more precarious the situation, and the more difficult it will be to defuse without setting off a downturn.

The U.S. Federal Reserve is on a similar path as the BOJ, according to some market watchers. The question is, will the U.S. stock market, ultimately, mirror the performance of the Japanese Nikkei 225, which still remains roughly 50% below the peak it achieved in 1989?

Our point here is that many of today’s investors who have viewed the recent U.S. stock market decline as a buying opportunity may be placing false hope in a narrative that we believe has a very slim chance of playing out the way that the bulls envision.

There were a few periods during the last 30 years when the Nikkei 225 managed to rally, in an attempt to once again reach the 39,000 level. However, none of those bear market rallies succeeded in a return to the all-time highs for the Nikkei.

The great P.T. Barnum knew that human nature causes people to engage in behavior and thinking driven by false hope, excessive greed, and a willingness to allow themselves to be suckered into believing an alternative reality, despite evidence to the contrary. 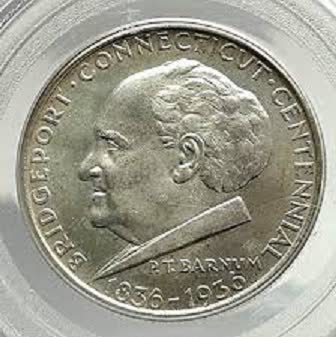 He knew that people had a propensity to be ignorant, naive, and lazy, and oftentimes looked for an easy explanation for those things which would normally require an objective and rational thought process.

Many of today’s younger investors approach Wall Street in the same manner that I did many years ago. The quest for riches and big hopes and dreams cause us to place our confidence in somewhat naive and easy explanations that serve to do nothing more than validate our confirmation bias.

We become misguided in our thinking and look for simple explanations to complex issues. We fail to take the time to perform extensive due diligence on our potential investment choices and fall prey to the error of looking for shortcuts by being lazy.

READ ALSO  The More The EU Tightens Its Grip, The More Countries Slip Through Its Fingers

Just take a look at how many investors who recently ran headlong into buying shares of United States Oil Fund (USO) without even taking the time to research and understand the underlying structure of the ETF.

The effects of contango and backwardation, common terms used in the futures market, were important concepts to understand before rushing off to buy the falling shares of USO. This is just one example of how buying-the-dip can have financially devastating consequences.

A thorough assessment of the new realities of today’s U.S. economy, and its ramifications for the future of stock prices, requires that you allow yourself to avoid the trap of confirmation bias by being open to alternative theories and ideas.

The four most dangerous words ever uttered by investors has always been and continues to be, “It’s different this time”.

There can be no doubt that the COVID-19 pandemic has created a global economic shock that is very different from anything that the world has ever experienced before.

But, in the end, markets rise and fall on the combined future expectations of investors; they always have and always will. Don’t let your expectations be influenced by an unrealistic perspective, based solely on an ingrained pattern of BTD behavior that, while it has worked in the past, is unlikely to work in the future.

Be diligent, have a healthy respect for risk, and above all do not ignore the possibility that the Federal Reserve’s intervention is not a panacea for equity markets.

If you are buying the dips and taking a long position in this market, you may, unknowingly, be following a dream that could quickly turn into every investor’s nightmare.

Disclosure: I am/we are long SPXS. I wrote this article myself, and it expresses my own opinions. I am not receiving compensation for it. I have no business relationship with any company whose stock is mentioned in this article.