Note: This article was originally published to subscribers on November 2, 2020.

Gold M&A activity is heating up as mid-tier gold miner Yamana Gold (AUY) has agreed to buy gold developer Monarch Gold (OTCQX:MRQRF) for a total consideration of C$200 million, or C$.63 per share, representing a 43% premium to Monarch stock price as of closing on last Friday, October 30.

In connection with the takeover, Monarch will spin out other assets into a new company with a cash balance of C$14 million.

Following completion of the spin-out, each Monarch share will be exchanged for the following:

I believe Yamana Gold is getting a quality junior with an economical gold project in a top mining jurisdiction, and at a very good price, as it values Monarch at C$200 million versus its fair value, which I feel is at least 50% higher based on its strong feasibility study results. I would not be surprised to see competing offers come in, as I argue below. 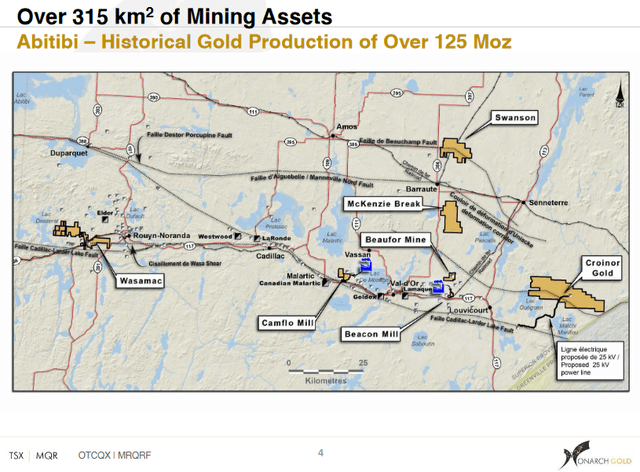 (Monarch’s Wasamac property is in a great location in the Abitibi region, close to several producing mines and mills. Image Credit: Monarch Gold)

The deal will see Yamana take control of Monarch’s Wasamac gold underground project, which is located 15 kilometers west of Rouyn-Noranda in the Abitibi region of Quebec, 100 kilometers from Yamana’s 50%-owned Canadian Malartic mine.

Wasamac is a feasibility-stage project that contains 1.8 million ounces of gold reserves at 2.56 g/t; it carries similarities to Agnico Eagle’s (AEM) Goldex mine (140,884ozAu produced in 2019) and Alamos Gold’s (AGI) Young-Davidson mine (188,000ozAu produced last year).

The feasibility study forecasts average annual production of 142,000 ounces of gold for 11 years at a cash cost of US$550 per ounce and all-in sustaining costs of $630/oz. It carries a pre-tax value of C$1.58 billion (US$1.19 billion) when using spot gold prices and a 5% discount.

On a post-tax basis, using a conservative gold price of US$1,300/oz, the project has an NPV of US$311.50 million, and that figure is north of US$800 million using spot gold prices.

According to feasibility study estimates, the mine cost $464 million to build, but Monarch has estimated that it can shave $230 million off by custom milling.

The $44 per ounce figure is lower than that of peers Bonterra Resources (BONXF) ($58/oz), Probe Metals (PROBF) ($63/oz) and Marathon Gold (MGDPF) ($112/oz), according to Monarch’s corporate presentation. (Past valuations of takeovers have ranged from US$50 to US$182 per ounce, with an average of about US$95 per ounce.)

The resource base includes 2.6 million ounces of gold (inclusive of reserves) at 2.70 g/t, and it is open for expansion at depth. The current mine workings only extend to 900-meter depth, compared to an average of 1,567 meters from other Abitibi mines, so there’s potential to expand the resource at depth.

Yamana Gold is the clear winner from this takeover, as it is getting a quality asset at a bargain price, paying $44 per gold ounce (resource) and less than .20X NAV (using feasibility study estimate, on a post-tax basis, and spot gold prices).

However, I would not be surprised to see competing bids emerge, potentially from another mining company that is already a shareholder of Monarch. Its largest shareholders include Alamos Gold, which has a 16% stake in the company; Hecla Mining (HL) owns 4% and Agnico Eagle owns 3%.

This deal requires at least 66 2/3 approval from Monarch shareholders at a special meeting in late-December. “Certain larger shareholders of Monarch have also entered into support agreements and together with shares already owned or held by Yamana, approximately 28% of Monarch’s issued and outstanding shares would be voted in support of the Transaction.”

It will be interesting to see what happens and if we see another situation like Cardinal Resources (OTC:CRDNF), which received competing bids from Shandong Gold (SDGMF) and Nordgold, driving its stock price up 317% year-to-date.

Disclosure: I am/we are long AUY. I wrote this article myself, and it expresses my own opinions. I am not receiving compensation for it (other than from Seeking Alpha). I have no business relationship with any company whose stock is mentioned in this article.