Yale Economist: The Decline of the U.S. Dollar Could Happen at ‘Warp Speed’ 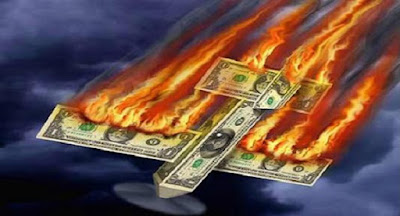 Stephen Roach, a Yale University senior fellow and former Morgan Stanley Asia chairman, tells MarketWatch that his forecast for a sharp deterioration of the U.S. dollar could be a very near-term phenomenon, not an event that looms off in the distance.

“I do think it’s something that happens sooner rather than later,” he says.

“In a COVID era everything unfolds at warp speed,” Roach told MarketWatch on Monday. He pointed to the contraction of the U.S. economy from an employment rate that was hovering around a 50-year low at around 3.5% near the start of 2020 to one that shows some 49 million people unemployed since the pandemic took hold in March. He also noted the rapid and unprecedented fiscal and monetary response that has ballooned the Federal Reserve’s balance sheet to more than $7.2 trillion from $4 trillion at the start of the year as examples of the celerity at which the currency market could change.

I have been making pretty much the same points in the EPJ Daily Alert.

The G.L.S Shackle kaleidoscope is turning.

I like to keep in mind what the economist G.L.S Shackle wrote in Epistemics & Economics: A critique of economic doctrines (1991) P76:

The business scene and its participants can be looked on as a staging contest of rival orientations, rival ambitions, rival exploitations of the world. It is capable, for all the analyst can tell ex ante facto, of realizing some one or other of these visions in some degree, and thus of presenting an appearance of momentary or temporary orderliness during the ascendancy of one orientation and its sponsors. Or the contest may be inconclusive and sterile, and result in a period of rudderless backing and filling of the sails and of untidy, blind struggle and groping for decisive policy. It will be a kaleidic society, interspersing its moments or intervals of order assurance and beauty with sudden disintegration and a cascade into a new pattern. Such an account of the politico-economic process may at various epochs or in the course of various historical ages appear less or more suggestive and illuminating.

The kaleidoscope is now turning with regard to the economy and the economic models. During such a period, if we can sense out just one or two significant things about the economy before the pack, that can be very important. All other data can just be considered parts of the kaleidoscope continuing to settle. It’s not important.

The two things I have focused on now in the EPJ Daily Alert is that, while most of the other data continue to settle down, the big things to know are that the stock market will climb (and confuse most because of the kalidescopic period we are in) and also that price inflation will climb (also confusing many).

Part of the price inflation coming will, of course, be because of the collapsing dollar on foreign exchange markets.