Xperi Gets A Boost From Comcast, But The Shares Aren’t Done Yet (NASDAQ:XPER)

Xperi (NASDAQ:XPER) surprisingly cut its dividend by a lot a couple of months ago, and the shares tanked. But there was always the likelihood (near certainty, we were inclined to argue) that a settlement with Comcast (NASDAQ:CMCSA) over patent infringement would rescue the day, and that’s exactly what happened.

This was always going to happen. Xperi already won three preliminary cases against Comcast, and the odds were always highly in favor of the two companies settling and Comcast resuming license pay, although we were a little surprised this wasn’t priced in at all prior to the settlement:

Let’s quickly recap its business. The company has a product and an IP license business, but somewhat confusingly, both these get revenues from licensing. The difference is that its IP business allows customers to build their own solutions. There is even the possibility of separating the businesses. From the earnings deck: 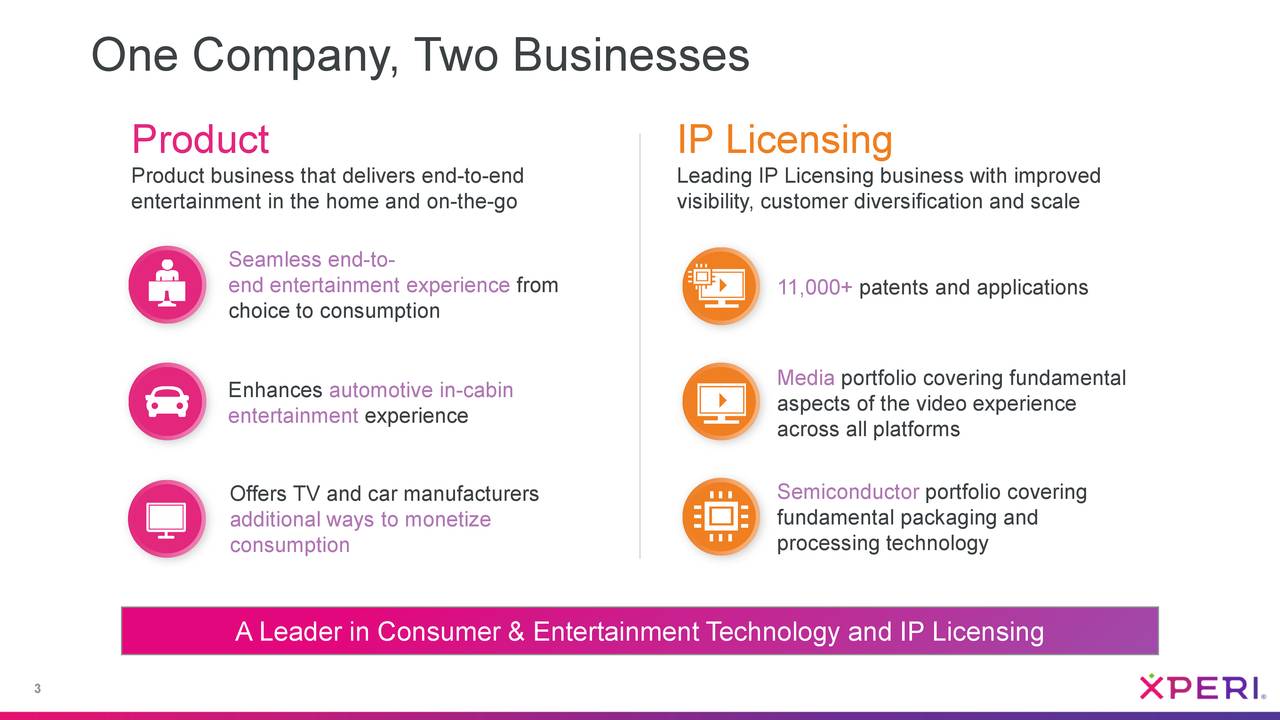 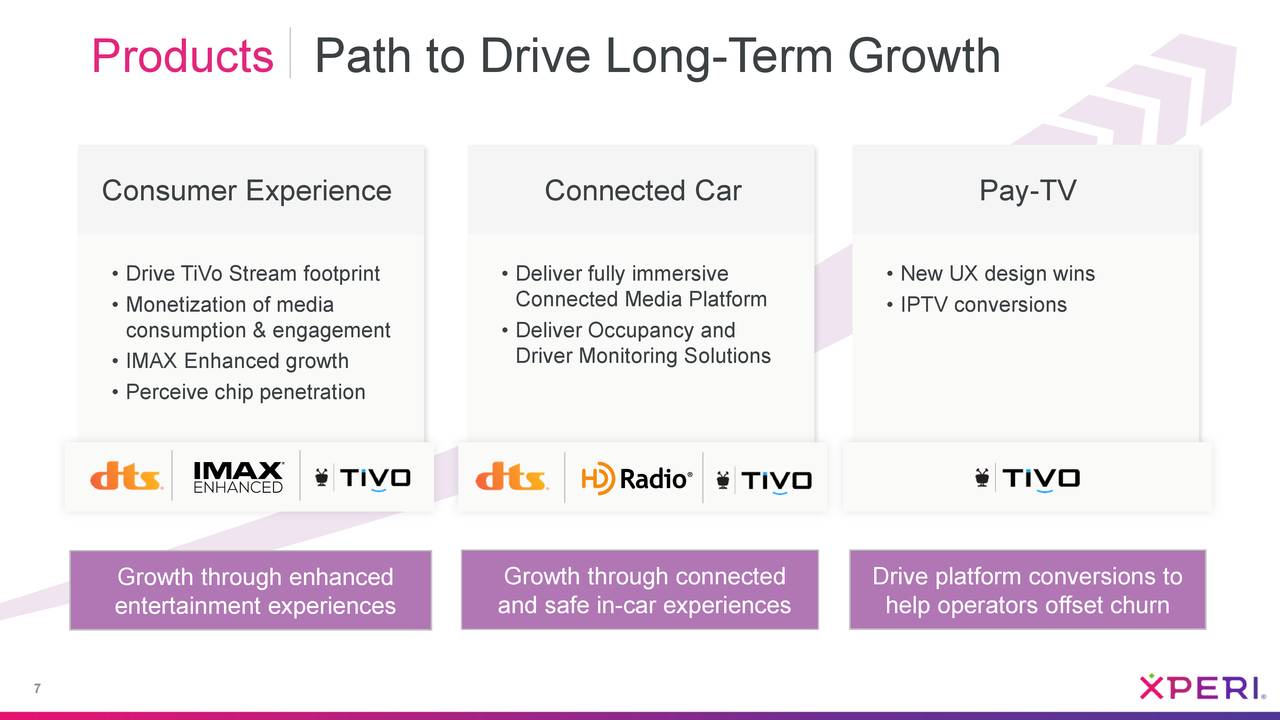 The consumer business contains the TiVo Stream 4K business, for which it has a three-stage strategy explained in our previous article. First, to sell the stick, which is not getting traction as it is getting into Walmart (NYSE:WMT), Amazon (NASDAQ:AMZN) and RCN.

The company is also expanding the ecosystem (Q3CC):

EVO Plus content expanded to include Pluto TV, Tubi, XUMO, and Locast and now delivers 144 core channels and up to 200 channels in major markets based on local availability.

That’s of course TiVo+, which is like the Roku Channel (NASDAQ:ROKU). Ultimately the goal is to embed the software into third-party hardware like TVs and set-top boxes, which would have the added benefit of much higher gross margins.

IMAX Enhanced is getting traction with TV OEM Hisense (OTC:HISEF) and content producers Tencent (OTCPK:TCEHY) and iTE in China and Philips (NYSE:PHG) in the Netherlands which put it into a soundbar. Management is very optimistic longer term (Q3CC):

I would say in the last couple of quarters, we’ve had some very productive discussions that you further bear out as we get into 2021 on the content front and also from a manufacturer support perspective seeing more major TV brands get in the game and support of the program.

Then there are the peripherals sales like the Philips soundbar, another opportunity.

Perceive’s Ergo chip for edge machine learning is being evaluated by multiple companies in the PC, mobile and enterprise customers.

The connected car business is suffering from the slump in car sales, but recovery is setting in, but HD Radio received good news as AM broadcasting was approved and the company expects a recovery here, and it delivered HD Radio on 14 new 2020 car models in the US.

Connected radio is making inroads with Mercedes Benz, and here is the state of play (Q3CC):

Connected Radio’s global platform is available in 24,000 cities, 48 countries in 14 languages with content source from 76,000 radio stations, all aggregated, curated and personalized to create a rich in-vehicle radio listening experience for its users.

In cabin monitoring, the company will see its first customer going live in H2 2021. Its PayTV business saw numerous customers (Liberty Latin America, Midco, MetroNet and RCN) launch the next version of the platform, but the pandemic slowed things down a bit in terms of household conversions. 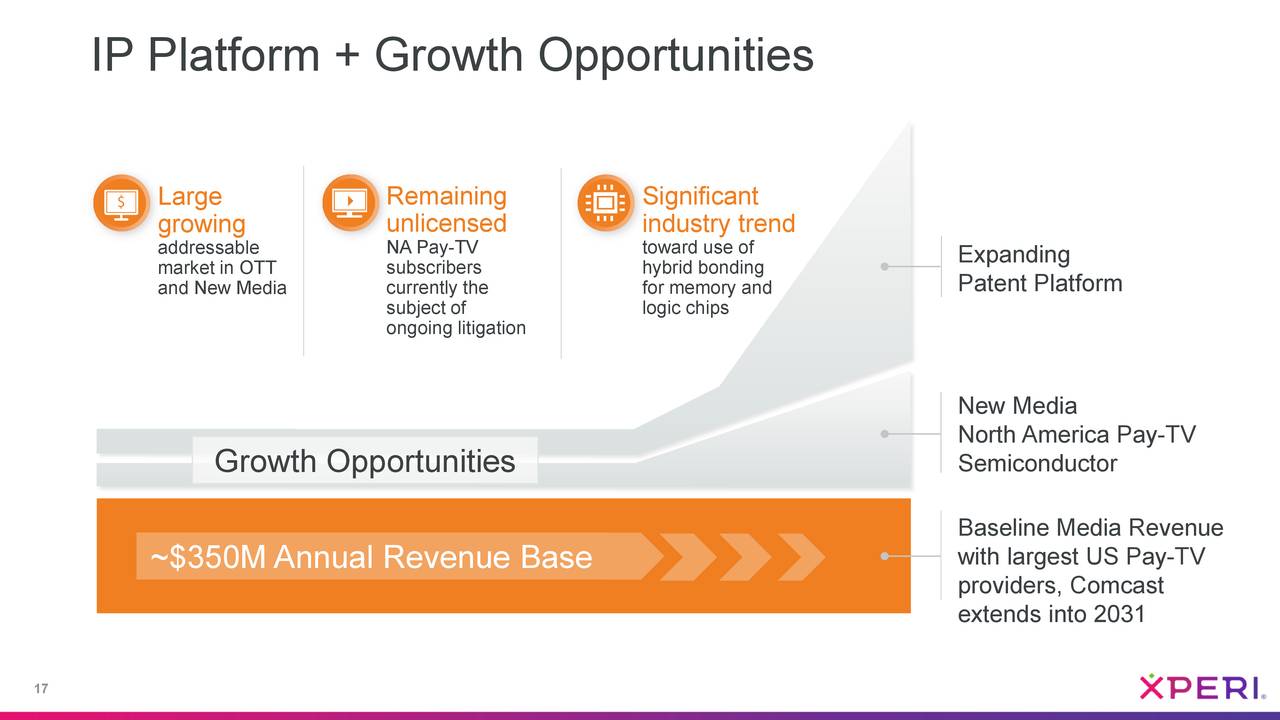 It was in the Media business where Comcast has the impact, increasing the base payment from $300M to $350M a year and a pretty hefty lump-sum for the years 2016-2020. The Comcast deal also increases the likelihood of additional deals and it is also looking abroad for customers like in Canada.

There is also the semiconductor technology, where it licenses to the likes of Micron (NASDAQ:MU). The company has interesting longer-term developments, for instance, with respect to the 3D packaging solutions (Q3CC):

Suffice it to say that I think is as the trends continue not only in memory, but in logic and many of the other semi-verticals. I think you’re going to see more adoption of this technology and it’s going to end up being a strong contributor over the next three, five, seven years. 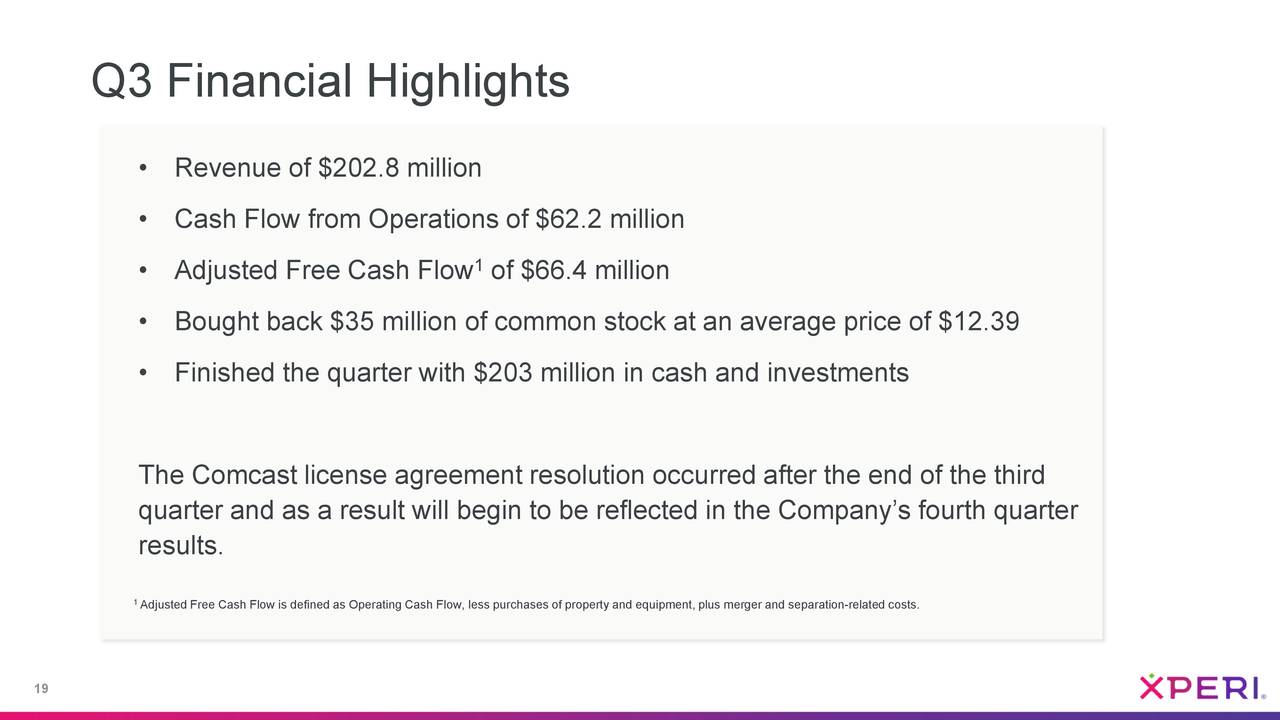 While the results were better than expected, revenues surprised on the upside by $8.3M but are still declining:

The size of the Comcast deal that can be gauged from the revised H2 2020 outlook (earnings deck): 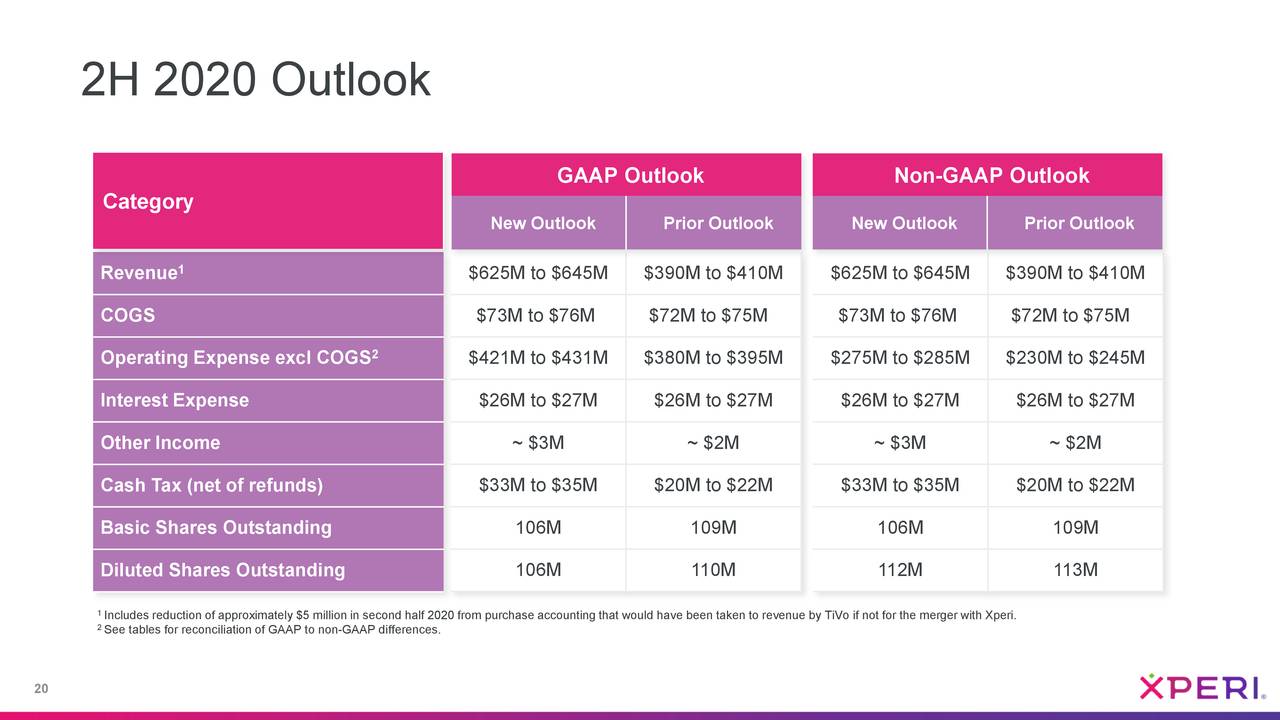 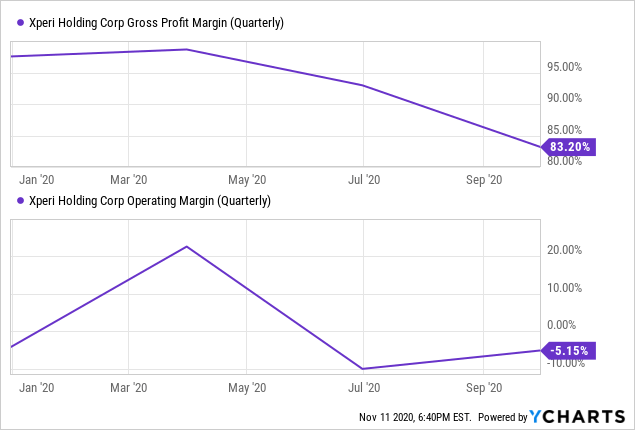 These are in GAAP, and we know that as a result of the merger, there is a huge gap between GAAP and non-GAAP (see below). Gross margins suffer a little from the introduction of the TiVo 4K streaming stick, but once that software is embedded in hardware, this will remedy itself. This is just a way to get traction. 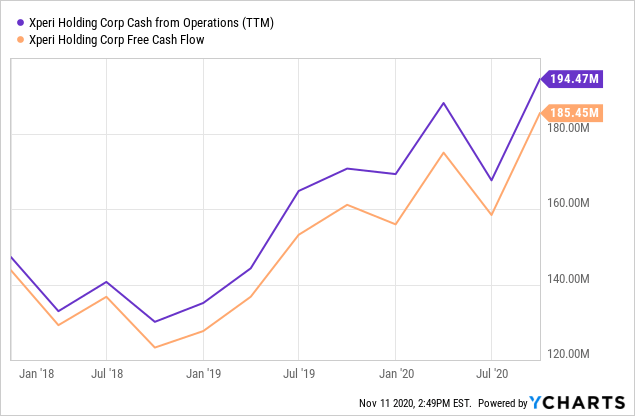 The company is a cash flow machine, producing $62.2M of operational cash flow and $66.6M in adjusted free cash flow in Q3 alone. But this will be boosted in Q4 by the Comcast lump-sum payments (earnings deck): 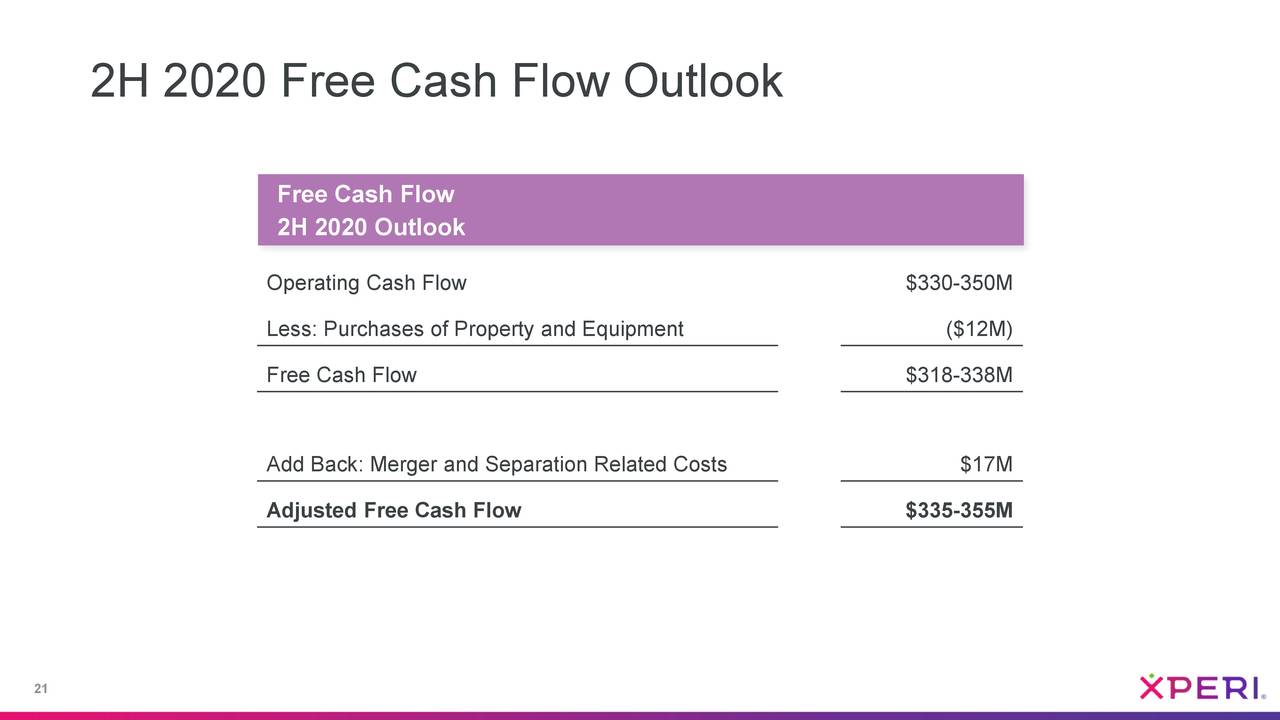 And really the history of both companies is pretty stellar (earnings deck): 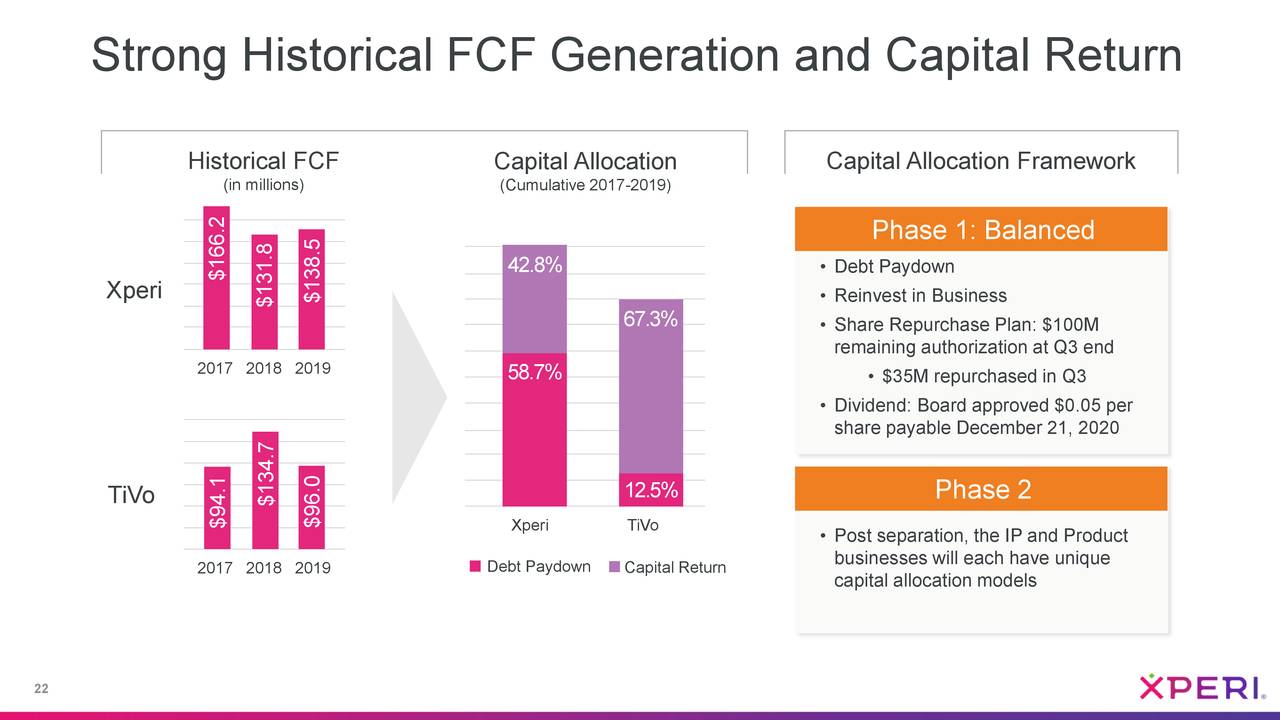 This will enable the company to significantly reduce its outstanding debt, indeed (Q3CC):

We paid down $13.1 million of our debt during the quarter, and expect to make the significant pay down on our debt as a result of the Comcast license.

That debt is still very substantial at $956M of course, and it’s costing Xperi $13.4M in interest payments in Q3 alone. The company managed to halve its outstanding debt from the end of 2017, but of course the TiVo acquisition added a whole lot of new debt: 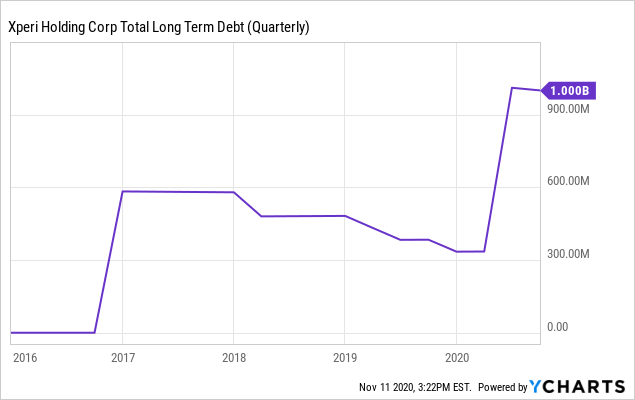 Still, we feel that even in the midst of a pandemic, the company is producing more than enough cash flow to deal with that and the task is a lot easier now with the Comcast settlement (which should also lower litigation cost).

One should be aware that the still pretty awful GAAP results are a result of some hefty non-cash items which stem from the merger, and this is continuing in H2 like the $103M(!) amortization expense (earnings deck): 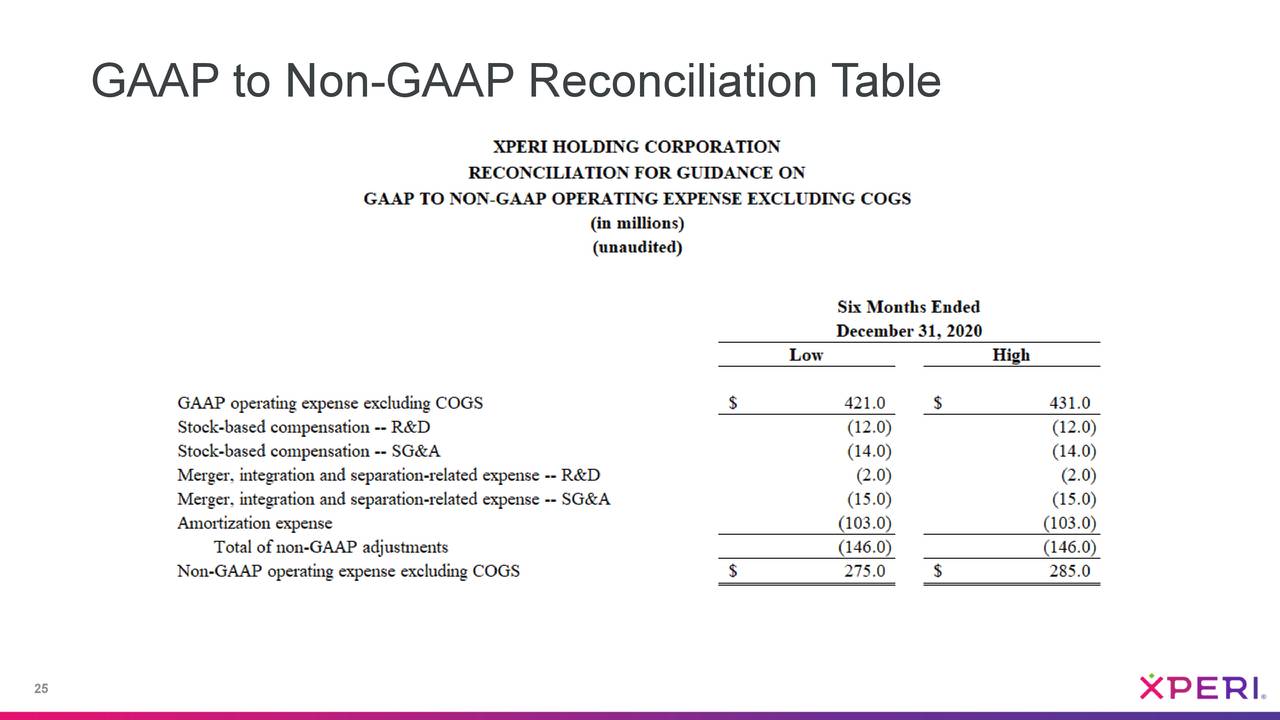 Analysts expect an EPS of $2.46 this year falling back to $1.72 next year. We assume this is on the lapping of the Comcast lump-sum payment in Q4 of this year. While earnings were on a downward trend this year, they beat expectations handily every quarter. From SA:

The company settled with Comcast, converting it into a customer with backward applicability to the tune of $50M a year in license payments from 2016 onward.

With the lump-sum payment in Q4 from Comcast, as well as the $200M+ in free cash flow a year, Xperi is already enjoying, even before the Comcast deal will allow it to significantly reduce its still considerable debt, as well as reduce interest and litigation cost and increase the likelihood of similar deals.

With an additional $50M in license income and several interesting developments (TiVo 4K streamer, PayTV, Connected Car, the Ergo chip, etc.), we think the shares still offer good value despite the jump on the Comcast news.

The company is also buying back lots of shares and still pays a decent dividend with a yield of 1.1%, and there is the $50M operational cost-cutting, which is two-thirds along the way, but will come into full effect next year.

A little further ahead might be the plans to split the company in two (product and IP), which could very well unlock further shareholder value.

If you are interested in similar small, high-growth potential stocks you could join us at our marketplace service SHU Growth Portfolio, where we maintain a portfolio and a watchlist of similar stocks.

Disclosure: I am/we are long XPER. I wrote this article myself, and it expresses my own opinions. I am not receiving compensation for it (other than from Seeking Alpha). I have no business relationship with any company whose stock is mentioned in this article.