The highest probability path for this week was for price discovery lower, provided 60.85s held as resistance. This week’s primary expectation did play out as the correction ensued in Monday’s auction, driving price lower to 56.64s. Buying interest emerged in Tuesday’s trade before balance developed, 56.64s-59.43s, ahead of Friday’s close, settling at 58.32s.

This week’s auction did see the primary expectation play out as key resistance held. Within the larger context, the current rally from 43.44s to 61.78s is likely a relief rally within a larger incomplete corrective phase.

Looking ahead, the focus into next week centers upon response to the key supply cluster, 58.75s-59.43s. The market continues to seek resistance in a process known as price discovery. Sell-side failure at this key demand cluster would target key supply clusters above, 60s-60.85s/64.60s-68.83s, respectively. Alternatively, buy-side failure within this key cluster would target key demand clusters below, 54s-51s/48.33s-47.27s, respectively. From a structural perspective, the highest probability path near-term is buy-side, barring failure of 56.64s as support. Within this near-term context, the intermediate-term (3-6 month) bias is now neutral barring failure of 43.44s as support or 61.78s as resistance.

It is worth noting that bullish breadth based on the S&P Utility Sector Bullish Percent Index, like all other sectors, saw a historic collapse in breath from February into March before a historic rebound occurred. Stocks more broadly, as viewed via the NYSE, have seen recent similar behavior. Asymmetric opportunity develops when the market exhibits extreme bullish or bearish breadth with structural confirmation. Intermediate-term structure shifts neutral. While the initial correction from all-time highs was severe, it remains most likely incomplete. 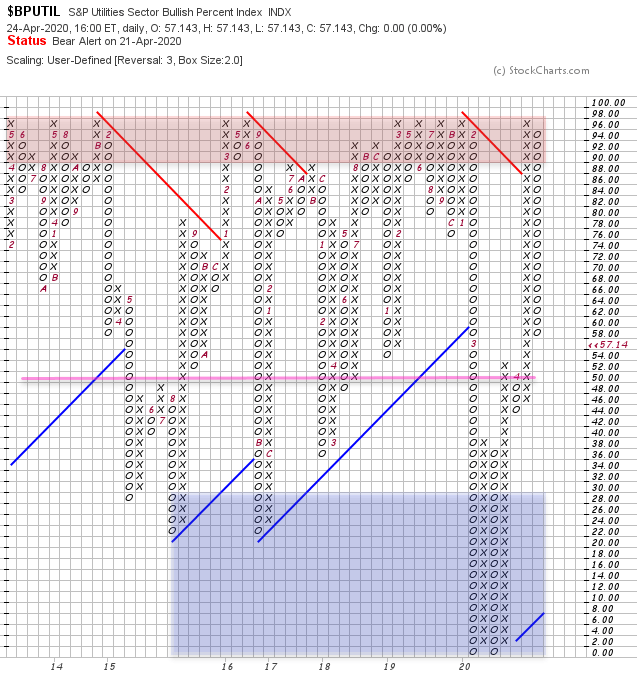