The highest probability path for this week was for price discovery lower, barring failure of 56.50s as resistance. This week’s primary expectation did play out as selling interest emerged near there early week, driving price lower to key support, 54.75s, into Wednesday’s auction. A sell-side breakdown developed there, driving price lower to 53.66s where buy excess halted the selloff in Thursday’s auction. Aggressive rotation higher followed before key support held ahead of Friday’s close, settling at 54.81s. 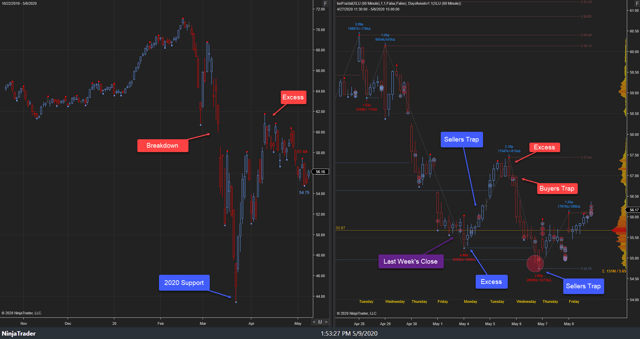 Tuesday’s late sellers held the auction as the selloff accelerated early in Wednesday’s auction, driving price lower through key support, 54.75s, achieving a stopping point, 54.33s. Buying interest emerged there, developing balance, 54.33s-55.05s, into Wednesday’s close. The breakdown area held as resistance early in Thursday’s trade as the selloff continued, achieving the weekly stopping point high, 53.66s. Buy excess formed there, halting the selloff before an aggressive rally ensued to 55.71s. Buyers trapped amidst sell excess, halting the rally into Thursday’s close. A pullback ensued in Friday’s auction to 53.97s where selling interest emerged as the week’s buy excess was tested. The sellers failed to hold the auction as key support held and rotation higher ensued to 55.18s ahead of Friday’s close, settling at 54.81s.

READ ALSO  Saudi Energy Minister: The Worst Is Over For Oil Markets 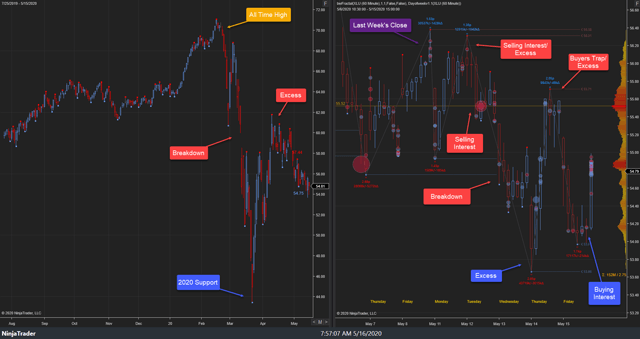 This week’s auction did see the primary expectation play out as the correction continued to 53.66s before a structural buy excess halted the selloff. Within the larger context, the larger corrective phase likely remains incomplete.

Looking ahead, the focus into next week centers upon response to this week’s key resistance, 55.70s. Sell-side failure at this key resistance would target key supply clusters above, 60s-62s/64.60s-68.90s, respectively. Alternatively, buy-side failure within this key cluster would target key demand clusters below, 52s-51s/48.33s-47.27s, respectively. It is worth noting that the current correction from 62.60s is now developing the structure of a descending triangle. From a structural perspective, the highest probability path near-term is buy-side, barring 55.70s holds as resistance. Within this near-term context, the intermediate term (3-6 month) bias is now neutral, barring failure of 43.44s as support or 61.78s as resistance.

It is worth noting that bullish breadth, based on the S&P Utility Sector Bullish Percent Index, like all other sectors, saw a historic collapse in breath from February into March before a historic rebound occurred. Stocks more broadly, as viewed via the NYSE, have seen recent similar behavior. Utilities’ breadth is declining and recently broke down through the mid-point trending back into the bearish extreme zone. This implies risk-on sentiment in this sector may prevail near-term. Asymmetric opportunity develops when the market exhibits extreme bullish or bearish breadth with structural confirmation. Intermediate term structure shifts neutral. While the initial correction from all-time highs was severe, it remains most likely incomplete.