The primary expectation for this week’s auction was for price discovery higher, barring failure of 30.65s as support. This week’s primary expectation did play out as an early week pullback to 31.39s resulted in a buy excess in Tuesday’s trade. The rally ensued, driving price higher to 35.54s where selling interest emerged, halting the rally in Friday’s auction. A pullback ensued to 34.07s ahead of Friday’s close, settling at 34.62s.

This week’s auction saw a pullback early week to 31.39s where buy excess formed. A rally then ensued to 35.54s within key supply overhead where selling interest emerged into the week’s end. Within the larger context, the market formed a structural support, 22.88s, in the wake of the recent historic selloff. This week’s rally was a re-test of the first major resistance area, 36.50s, following the historic breakdown of March 2020.

Looking ahead, the focus into next week rests on response to this week’s key trade cluster, 35.54s-34.15s. Buy-side failure to drive price higher from this resistance will target key demand clusters below, 31.39s-30.65s/28.13s-27.09s, respectively. Alternatively, sell-side failure to drive price lower from key resistance will target key supply cluster above, 42s-44s, respectively. The highest probability path for next week is buy-side, barring 35.54s failing as resistance. The larger context now shifts neutral as XLE trades off fifteen-year lows.

Looking under the hood of XLE, we see that its performance is really a tale of two stocks, Chevron (NYSE:CVX) and Exxon Mobil (NYSE:XOM). They account for approximately 24% and 23% of the entire ETF, respectively. 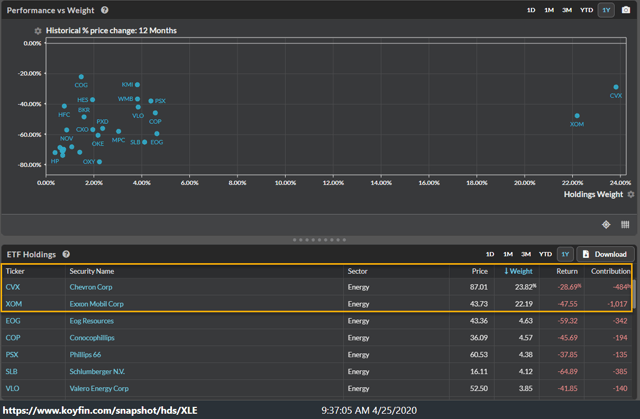 Further, their performance is responsible for -484bps and -1017bps, respectively, of the XLE’s current one-year performance. As go Chevron and Exxon, so goes the XLE. 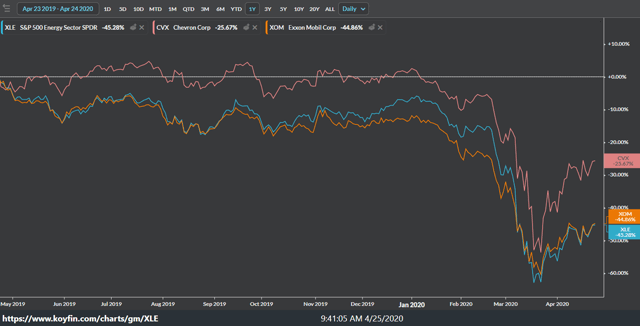 It is worth noting that breadth, based on the S&P Energy Sector Bullish Percent Index, consolidated this week after trending higher in historic fashion following February-March’s historic collapse. Stocks more broadly, as viewed via the NYSE, see a similar posture. Asymmetric opportunity develops when the market exhibits extreme bullish or bearish breadth with structural confirmation. Currently, conditions favor a neutral posture as the market found structural support, 22.88s, near late 2003 support followed by a rapid and substantial relief rally to 36.82s. The market approaches major structural resistance as breadth is now once again in the bullish extreme zone. The support formed in March is likely a momentum low formed before a final price low. 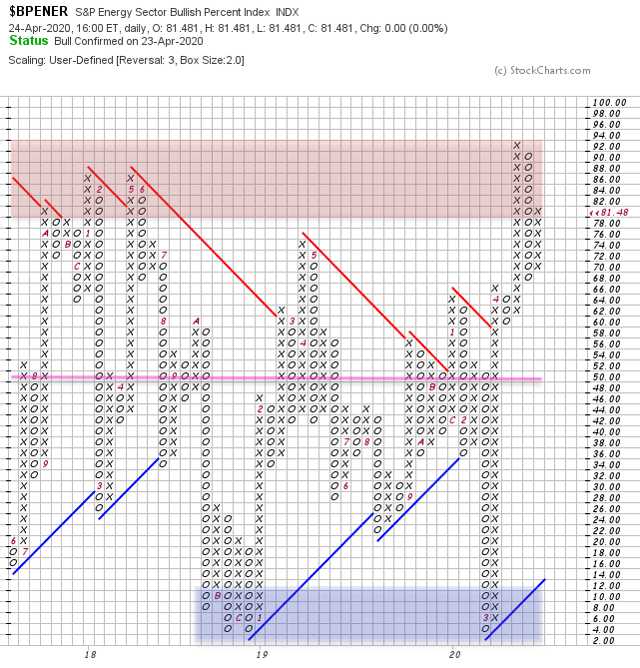