WTI: The Prospects For Oil In The Second Half Of 2020

Drilling has been on the decline during 2020 due to a perception of prolonged oversupply in the market. For the most part that perception has been correct as inventory levels have surged. More recently the blue in the EIA chart below has been trending back into the five-year range, and we think that will continue. 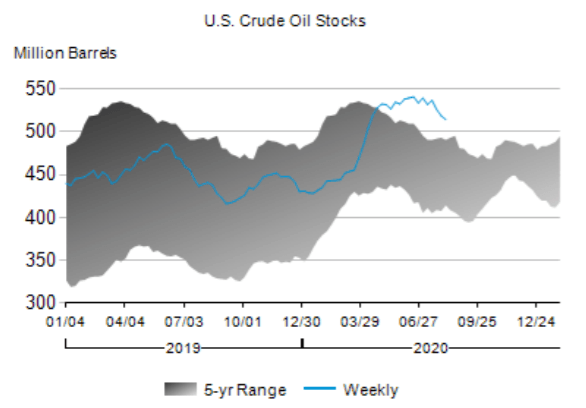 The land rig count as measured by Baker Hughes as fallen to its lowest point since record keeping began. This is contrary to past expansion and contractions in this industry, which is often called “cyclic” – meaning there are ebbs and flows depending on the market. In the old model rigs would rise and fall pretty much in line with the price of oil. 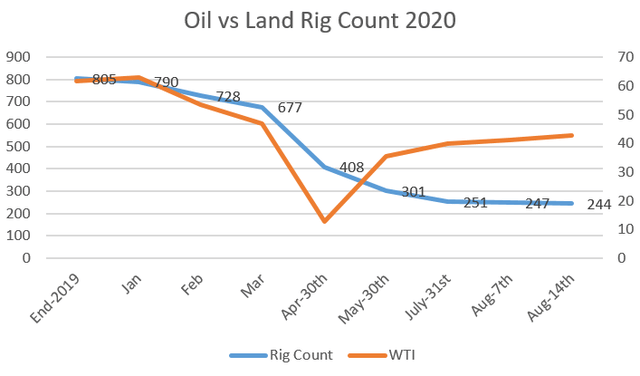 You can see from the departure of the two curves at the end of April some new forces at work in the oil market.

The decline of shale

I have been writing about a lack of drilling decline for shale, and giving some fairly simplistic calculations for the impact on total production, for about the last six months. My estimate for year-end 2020 exit has been in the 5-mm BOEPD range, which has put me a odds with the EIA, and pretty much every other spit-baller out there. It’s lonely being a maverick, but I’ve stuck to my guns.

So you can imagine how interested I was to run across this graphic from a shale specialist consulting firm in my general reading. It takes the recent low in horizontal rigs and extrapolates a production decline... pretty darn close to what I’ve been forecasting for 2021. It then assumes flat drilling through 2026, with a decline to about 4-mm BOEPD by then. 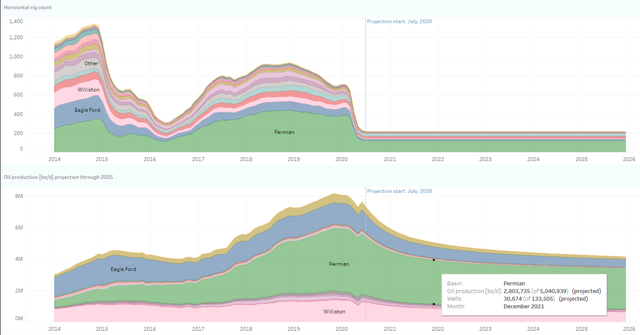 I part company with them at that point as I think drilling will increase from present levels. Why wouldn’t it? Rigs can be had for a song. Same story with frac spreads and sand. With production declining and prices going higher, I would begin adding to my drilling budget and heading back to the field. But it doesn’t look like it will be a V-shaped recovery. A gradual increase is the best we can hope to see.

A slow restart in the Permian

Here’s what one key Permian operator told us in their earnings call. Occidental Petroleum, (OXY) is not going to be doing a lot of drilling anytime soon. OXY is down to just one rig in the Permian – a steep decline from what the company told investors what to expect last year. At the time of the merger the companies together kept 22 rigs turning to the right. 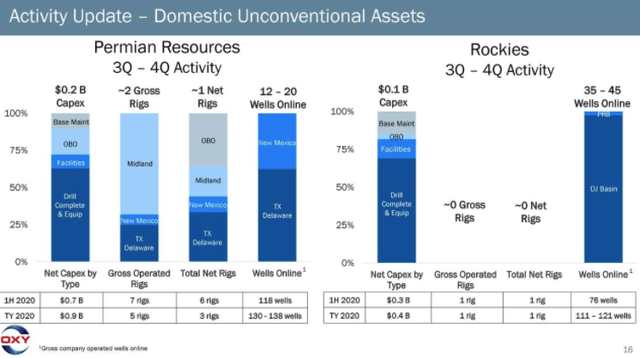 The question is will this mindset be replicated across the industry? I don’t think so. Occidental Petroleum is almost uniquely hamstrung with debt maturities, $10 bn of which are coming due within the next couple of years. Debt that will have to pushed back with refinancings at almost assuredly higher rates due to the company’s weakened balance sheet position. It’s not a pretty picture. Is it as grim as some writers are projecting? I will have an article out soon discussing the way forward for OXY.

Some of the smaller shale drillers, like Parsley Energy, (PE) which I discussed in an article last week, have slightly more ambitious plans than OXY. 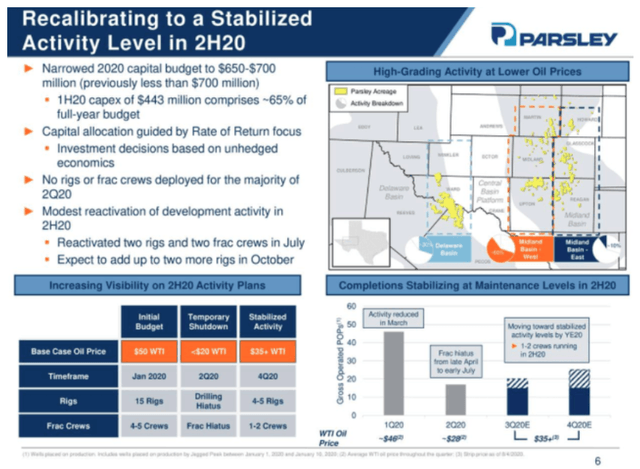 Parsley has brought back a couple of rigs and a couple of frac crews as of July to slow the decline in their shale portfolio in the Permian. If things go well, another couple could go to work in Q-4.

I have looked at a number of shale drillers post earnings and this story is not uncommon. All are determined to fund capex from OCF and pay down debt as their two key priorities. Slowing the decline of existing fields to a minimal level is next. Funding growth is not on the horizon.

What does all of this mean?

Well for one thing it means U.S. production is headed for a sharp decline. I think the EIA numbers in the last STEO are a pipe dream. They are forecasting a year-end 2020 crude production exit of 11.3 mm bbl. We are below that now using their numbers at 10 mm BOEPD. They are counting on restored production from the Mar/Apr/May shut-ins to get us back to that 11.3 mm BOEPD figure. We may get there but it will be only transitory.

What do we know? We know that +/- 800 rigs, we able to get us to 12.7 mm BOEPD in January. A high level of frac activity through March kept the miracle alive. Fracking then began a precipitous decline in February and shows no more signs of recovery that drilling. 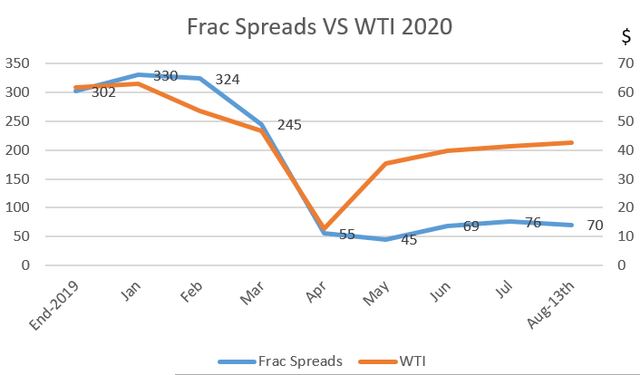 Without significant new drilling at a rate vastly above the 244 drilling ahead today, we will never see 11.3 mm BOEPD again. At 244 rigs the rate of new barrels being added is about 425K BOEPM below the shale decline rate of +/- 625K BOEPM.

Shale production always was about frenetic drilling to replace a rapid decline rate. It depended on cheap financing, a ridiculously high reserves valuation, and a staffed up service industry willing to increase its own capex based on growth projections.

Oil industry budgeting historically has been a fairly simple backward-looking affair. I’ve done some of it in my past life working for a giant oilfield service company. You take your past performance, add an increase sent from HQ that funds a growth metric that you’ve taken from what customers have told you their activity will be in the upcoming year, and “Bob’s your uncle,” you’ve got the next years budget forecast. It’s a fairly low-brow affair dressed up in fancy Excel spreadsheets and massive PowerPoints for the suits. It worked well for years when oil prices were rising.

In a declining market like we’ve experienced for the past six years, it’s also how we got $55 bn in equipment write downs in the oil service industry over the past year. It’s how we get a company like Transocean, (RIG) with a valuation of $1.3 bn, about the cost of just one of their new drillships, and a debt wall of ~$9 bn over the next few years, that they really have no line of sight avoiding. Rig rates have remained stuck around $200K per day for the last year or so, a far cry from the $500-600K per day they commanded just a few years ago.

All of these companies have told us this type of thinking is in the past. I discussed what one company told us about the future in an article last month – Microsoft: Frac To The Future.

There will be more stories like that soon. What it means is smaller capital budgets, fewer people, but more profits as these companies sell technology to operators.

Predicting exact oil prices is a fool’s game in which I don’t indulge, so I’m not going to give you a price target for crude. I will reiterate that I see about a 4-mm BOEPD gap down in shale production from previous highs, set only a few months ago, driven by a lack of new drilling and the decline rate for shale by the end of the year. If this scenario plays out, the market will move from a perception of plenty to one of panic in a very short time span. In that scenario oil will move higher in price.

There also are a number of exogenous factors that could exacerbate the situation. Fragile relationships in the Middle East could rupture. Iran and Libya come quickly to mind here. Latin American production has been falling, Brazil, Venezuela, and Mexico come to mind here. The West-African countries of Nigeria and Cameroon also are seeing production declines from lack of new drilling. The point here is that oil has had virtually no “war” premium priced into it for many months.

As demand increases from a world going back to work – gradually we admit, there’s likely to come a point where someone’s demand is not met. That will be the day. Like it or not, the world still runs on oil, and will for most of this century. Having enough of it will soon dominate the conversation.

Investors looking to play a rising oil price scenario might look to some of the oil-related ETFs, many of whom have lost a lot of value, and remain depressed in spite of WTI’s recent rise. USO, (USO), UCO, (UCO) are two ways investors might step into the growth story coming up for oil.

UCO is a double leverage investment that yields spectacular returns on a basket of NYMEX crude futures when oil is rising.

USO which leverages the futures contract for WTI is another way to play a rising oil price.

It should be noted as ETF’s these instruments can be very volatile and are best suited to experienced investors. 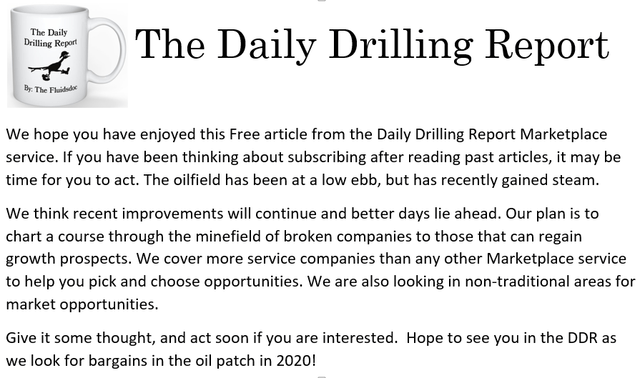 Additional disclosure: This is not advice to buy or sell this stock or ETF. I am not an accountant or CPA or CFA. This article is intended to provide information to interested parties and is in no way a recommendation to buy or sell the securities mentioned. As I have no knowledge of individual investor circumstances, goals, and/or portfolio concentration or diversification, readers are expected to do their own due diligence before investing their hard-earned cash