The world’s largest cinema chain attempted to stage a grand reopening in the third quarter after months of coronavirus lockdown restrictions but, open or closed, the result turned out to be largely the same: empty theatres.

AMC Entertainment on Monday recorded a $906m loss for the three months to September 30 as revenues plunged to $120m, down 91 per cent from a year ago. The company’s net quarterly loss compared with a $55m loss in the same quarter a year ago.

With theatres permitted to reopen in most US states, AMC has kept going despite weak box-office receipts, elevating its costs. As of the end of October AMC had reopened 539 of its 600 US cinemas, with limited capacity due to social distancing guidelines, and with few movies to attract an audience.

Tenet, the Christopher Nolan epic that Hollywood had hoped would jump-start the movie business, has made only $54m at the domestic box office.

Following the Tenet results, the movie studios have postponed almost all their biggest films to next year, leaving cinemas stranded without new releases to entice audiences.

Rival operator Cineworld has closed its cinemas again in the UK and US following the delay of the new James Bond film No Time To Die until next year. Mooky Greidinger, Cineworld’s chief executive, told the Financial Times that he decided to close the group’s cinemas because without blockbusters, “we lose more from being open than we are losing when we are closed”.

Investors have grown increasingly concerned about AMC’s survival after it warned last month that it could run out of cash by the end of the year.

AMC said in August that it had restructured $2.6bn worth of debt, which would allow it to “weather a hypothetical suspension of all our theatre operations globally into 2021”.

However, bonds that the company issued in April have been trading in recent weeks at heavily discounted levels.

S&P predicted AMC would run out of cash within six months as it burns through more than $100m a month. The agency downgraded AMC’s credit rating two notches to triple C minus last month. 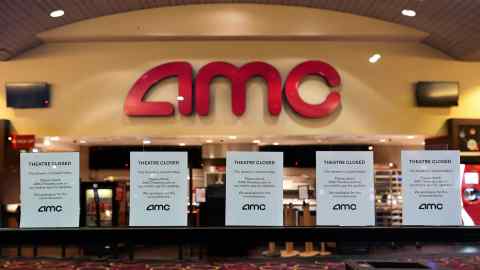 On Monday chief executive Adam Aron attempted to soothe concerns about AMC’s liquidity, touting the steps the company has taken to raise cash to plug the losses. A regulatory filing earlier in the day set out plans for an equity fundraising of more than $40m.

“The liquidity enhancing and leverage reducing actions that we already have taken and will further need to take, combined with our relentless focus on efficiency and cash management, are all crucial to navigating through this storm,” Mr Aron said.

Shares in AMC, whose bigger shareholder is the Chinese conglomerate Dalian Wanda, climbed 2.3 per cent in after-hours trade. The stock has lost almost 70 per cent of its value this year.