Winnebago’s Recovery Is Priced In (NYSE:WGO) 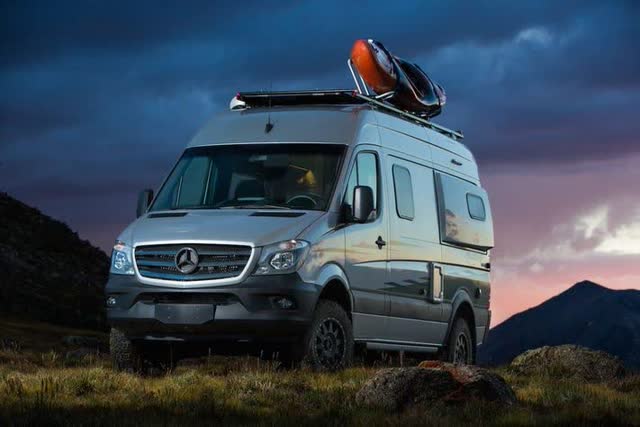 The coronavirus led to shelter-in-place policies and practically shut down business activity. When the economy reopens, cyclical industries could still be vulnerable. That could be foreboding for RV maker Winnebago (WGO). In its most recent quarter, the company reported revenue of $402.46 million, down 23% Y/Y. 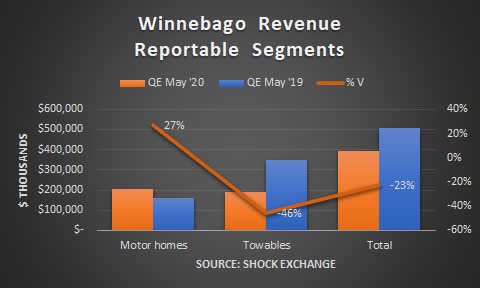 Winnebago experienced temporary factory closures earlier this year. The measures were taken to help stem the spread of the pandemic. The company’s Towables segment was particularly hit hard. Revenue from Motor Homes of $203.6 million rose 27% Y/Y, while Towables revenue fell 46%. Unit volume for Towables and Motorhomes declined 44% and 20%, respectively. However, average selling price (“ASP”) for Motorhomes rose 60%. This could have been driven by a change in the mix of business. There is a school of thought that people are camping more, given that travel via public transportation has declined amid the pandemic. This may have impacted Winnebago’s business mix.

Through July 2020, shipments for the entire RV sector fell about 10% Y/Y. Shipments were in free fall in March and April as supply chains may have been negatively impacted by the coronavirus. Shipments bounced 11% and 53% in June and July, respectively. This may have been due to pent-up demand. At the end of the day, pent-up demand could spur RV shipments in the second half of the year.

In response, we took immediate and decisive actions to control costs and maintain our financial strength and flexibility by making the tough, but necessary decision, the week of March 23 to temporarily suspend most production activities across all of our facilities. At one point in time, we have more than 4,000 employees unfortunately furloughed.

Beginning with our Specialty Vehicles and Chris-Craft businesses in mid-April, our full portfolio of Winnebago Industries businesses eventually resumed production activities in a disciplined and graduated manner during the month of May.

Cost take-outs were not able to offset the decline in revenue and gross profit last quarter. They could provide a buffer for margins in the second half of 2020, assuming the recent growth in RV shipments is sustainable.

The Upside May Be Priced In

Winnebago has been one of the best-performing RV manufacturers in the industry. The company has been able to grow its top line via acquisitions; management has successfully integrated these target companies and sustained or improved margins. Through the first nine months of the fiscal year, Winnebago generated free cash flow (“FCF”) of $133.9 million. Its working capital of about $300 million should sustain the company if the economy continues to turn down.

However, the stock may have gotten ahead of itself. Winnebago has an enterprise value of $2.0 billion and trades at 16.1x last 12 months (“LTM”) EBITDA. WGO has likely benefited from the melt-up in broader financial markets, triggered by stimulus from policymakers.

WGO is up over 35% Y/Y. Any future upside is likely priced in. Hold WGO.

I also run the Shocking The Street investment service as part of the Seeking Alpha Marketplace. You will get access to exclusive ideas from Shocking The Street, and stay abreast of opportunities months before the market becomes aware of them. I am currently offering a two-week free trial period for subscribers to enjoy. Check out the service and find out firsthand why other subscribers appear to be two steps ahead of the market.