Will Bank Runs Occur in the United States Over the Next Few Weeks? 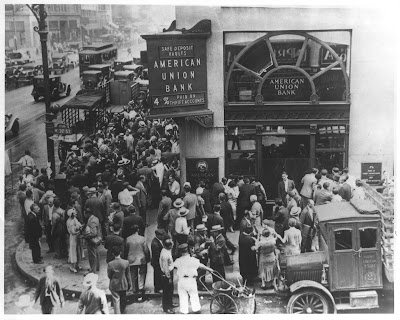 Do you think we could see bank runs in the us in the next few weeks ?

If there is one thing that is clear as the COVID-19 panic spreads across the nation, the Federal Reserve Bank will do whatever they can to prop up the system with money printing if they think money printing can solve the problem.

They do not want to see bank runs at this time. If for some reason a run starts at a bank, the Federal Reserve will be there with its money pump and payout all insured depositors, probably even non-insured depositors.

I hasten to add that while a bailout will occur, it appears that the FDIC, the technical insurer that would be backed up by the Fed, has a long-standing policy to make people stand in line for very long periods of time and pay the money out slowly during a bank run.

There was once, many years ago, a run on a bank in Chinatown in New York City and I couldn’t understand why people were having to wait in line for what appeared to be a half-day or more.

I managed to talk to the branch manager and she told me that when FDIC authorities came into the bank, they told employees to take their time in handing out money, that they should not rush, and if anyone needed to fill out any document, they shouldn’t hand them the document until the customer is at the teller’s window and have the customer fill it out in front of the teller as opposed to having them fill it out on the side.

So for whatever reason, I suspect to discourage others from withdrawing funds, that is what FDIC policy appears to be.

I should point out that in the EPJ Daily Alert, I regularly advise subscribers to keep a minimum of three months worth of usual spending in the form of cash under the bed. You just never know what crisis the government is going to cook up to limit ATM withdrawals, so it is better to be ahead of the pack when cash for when cash will be king.

But I don’t see any short-term panic-induced bank runs.