Will Aurora run out of road as west’s last self-driving unicorn?

When a trio of self-driving pioneers from Google, Uber and Tesla launched the driverless start-up Aurora Innovation in 2017, they offered carmakers threatened by big tech’s push into autonomous transport a lifeline: they would partner with carmakers, not disrupt them.

At first, its strategy of selling carmakers the technology to build their own self-driving fleets looked promising. By early last year Aurora had lined up multiple partners, raised an impressive war chest and burnished a reputation for having some of the top engineering talent.

But after a wave of consolidation that has seen carmakers opt to build their autonomous technology in-house, Aurora is suddenly the west’s last independent self-driving unicorn standing.

With deals struck in recent years between Volkswagen and Argo, Hyundai and Aptiv, and Fiat Chrysler and Google’s self-driving unit Waymo, the company is faced with the prospect of developing a hugely expensive technology with no one to sell it to.

But Chris Urmson, Aurora’s chief executive and the former lead of Google’s self-driving project, is betting that carmakers will yet be forced to concede defeat and switch to Aurora’s technology. “At some point our technology will work, and theirs won’t,” he said.

It’s a risky bet. Karl Iagnemma, chief executive of Motional, the driverless joint-venture from Hyundai and Aptiv, said: “I have a lot of respect for Aurora, but I do believe that it’ll be a challenge for any start-up to compete in this space given the partnerships that are being formed and the massive influx of capital that we’re seeing flow to the major players.”

Today’s car industry faces escalating challenges, from falling sales to regulatory requirements demanding greener vehicles. Aurora’s hope is that its narrow focus on “the Driver” — the hardware and software system for controlling the car — rather than building the vehicle itself or maintaining a ride-sharing service, will pay dividends.

Mr Urmson isn’t rooting for others to fail, necessarily. But the otherwise jovial Canadian thinks the moonshot of building driverless technology will leave a vast graveyard in its wake.

His preferred analogy stems from aviation, where Boeing and Airbus have a combined 91 per cent market share, as two of the only companies capable of building aeroplanes. “We expect this technology to have the same kind of barrier,” he said. “This is going to be really hard and so we’re setting ourselves up for that long commitment to deliver that.”

Aurora has now raised $700m from investors including Sequoia, T Rowe Price and Amazon, at a valuation of $2.5bn, and amassed a team of more than 500 employees in four states — California, Pennsylvania, Montana and Texas. But it tends to operate in secrecy, with the bulk of its work taking place virtually in simulated worlds where it can encounter far more variety than even the busiest cities.

By contrast, it is common to see self-driving vehicles from Waymo, Cruise and Amazon-owned Zoox roaming the Bay Area. In China, groups such as AutoX and Didi operate pilot self-driving rideshare services. But there’s almost always a back-up driver involved and often an engineer riding shotgun. Mr Urmson sees these efforts as emblematic of the wrong approach.

“It’s just a more expensive, crappier taxi,” he said. “We expect that very few companies will actually cross that chasm of being able to pull the driver out of the vehicle.”

‘The provider for everyone’

Mr Urmson has palpable confidence in his vision, but also a record to back it up. Since his Carnegie Mellon team won the DARPA Urban Challenge in 2007 — the race that spawned today’s self-driving movement — he has been one of the industry’s central players, first co-founding Google’s self-driving unit and later leading it.

Yet as the broader industry shifts towards more niche use cases for autonomous technology, some industry executives are left wondering about the divide between Aurora’s big ambitions and the current state of its product.

“I see a lot of companies that haven’t made this work on a small scale, yet they are trying to make it work everywhere,” said Stefan Seltz-Axmacher, chief executive of automated truck group Starsky Robotics, which collapsed earlier this year when it was unable to raise more funds.

“Unless you can make this work quickly, being the tech provider to every [vehicle maker] is farcical,” he added. “It’s not feasible to be the provider for everyone.”

Last month, when Aurora announced that its “first commercial product will be in trucking,” rather than in passenger cars, some questioned whether the apparent expansion was actually a desperate shift in business model.

One person, who called Aurora “an extremely high-quality company”, nevertheless said the unveil looked rushed and pointed out that the video announcing the pivot showcased a Peterbilt truck embossed with a glossy Aurora logo — but lacking in any self-driving hardware. 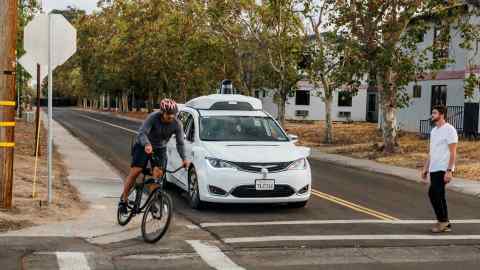 Rumours even circulated in the days after that Aurora might even put itself up for sale or raise funds. Here Mr Urmson was unequivocal. “We are not up for sale, we are not attempting a public listing, and we’re not actively fundraising,” he said. “We have a lot of runway.”

Still, consolidation in the industry has meant that Aurora’s early partners have either cancelled their partnerships or made investments that raise doubts about any future work together. Volkswagen pulled out of a trial with Aurora last year — after first trying to acquire it — while Hyundai, an investor, launched a driverless joint-venture with Aptiv in March. FCA‘s deal with Waymo was last month, and Amazon, a key backer, closed its deal to acquire Zoox for $1.3bn two weeks ago.

However Mr Urmson said these developments could eventually work to Aurora’s advantage. “I look at most of these arrangements as fantastic,” he said, “because the best customer is the customer that has tried to solve this challenge, and hasn’t.”