The deadly wildfires ravaging America’s western states have temporarily propelled climate change and energy to the fore of the US presidential contest between Donald Trump and Joe Biden, yet the spotlight may not endure.

The apocalyptic scenes of burning land stretching from California to Oregon and Washington state have provided an opening for Mr Biden and fellow Democrats to attack the incumbent’s record of rejecting the basic science behind climate change and pulling the US out of the Paris climate accords.

But while Mr Trump has felt enough pressure to make an unscheduled stop in California on Monday to get a briefing on the firefighting efforts, he has dismissed the problem as one of “forest management” rather than extreme weather or climate change. He has also made a point of defending fossil fuels while disparaging renewable energy.

According to a Pew Research Center survey conducted in late July and early August, just 42 per cent of US registered voters said climate change was “very important” to their vote in this year’s election, compared with 79 per cent who said the same about the economy, 62 per cent for the coronavirus crisis and 52 per cent for race and ethnic inequality. The poll highlighted the extent to which the issue has mostly taken a back seat in this year’s campaign — and why it might fade again in the final stretch as long as the situation in the west does not spiral out of control.

“The parties also have much different positions on climate change, and when the term comes up, partisans can scatter into their respective camps,” said Kyle Kondik, a political analyst at the University of Virginia’s Center for Politics.

“Additionally, while the wildfires on the west coast are clearly a major story across the nation, the experience itself is limited to the places dealing with the fires. If this was happening everywhere in the country, it might be easier to get voters to take notice,” he added.

Nonetheless, Democrats including Mr Biden see the western wildfires as validation of their focus on climate change, and an opportunity to mobilise voters, particularly within the party’s progressive wing, which has been pushing hard for an aggressive green agenda.

“Vote. Vote. And vote on climate,” Jay Inslee, the Democratic governor of Washington state, told ABC’s This Week on Sunday. “Get out there and vote against any politician like Donald Trump who has downplayed climate change, just like he’s downplayed Covid,” he said.

Mr Biden on Saturday made his own pitch for Americans to reject “a future defined by an unending barrage of tragedies” like those happening in California and Oregon.

“The science is clear, and deadly signs like these are unmistakable — climate change poses an imminent, existential threat to our way of life. President Trump can try to deny that reality, but the facts are undeniable,” Mr Biden said.

The Democratic nominee has not only called for the US to recommit to the Paris climate accord if he wins the White House, but to ensure that the US reaches net-zero emissions by 2050. He has also planned federal investments worth $1.7tn over a decade in clean energy — an effort inspired by the leftwing of the party including Alexandria Ocasio-Cortez, the congresswoman from New York City.

“The terrifying pictures from California, Oregon, and Washington make it clear: the #ClimateCrisis is an existential threat to our country and planet,” Elizabeth Warren, the Democratic senator from Massachusetts, wrote on Twitter. “No one state can stop this crisis on its own. The federal government must #ActOnClimate now”.

But Mr Biden’s plan has mostly generated mockery and anger from Mr Trump. At a campaign rally in Nevada on Saturday night, the US president touted low petrol prices this year as his accomplishment even though they were the result of the global recession, and said that Mr Biden and other “liberal hypocrites” were “fighting God . . . fighting guns . . . [and] fighting oil”. 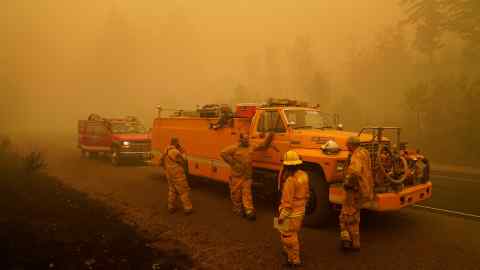 “California has already implemented this extreme agenda and they are experiencing massive blackouts,” he said. Mr Trump then quipped that under Democratic energy policies families could not watch television if the wind wasn’t blowing and many birds, including Bald Eagles, were being killed by windmills. “It’s unbelievable. You want to see a bird cemetery? Walk under a windmill sometime,” he said.

Mr Trump showed some sensitivity to environmental issues earlier this month when he extended a moratorium on drilling off the coasts of Georgia, South Carolina and Florida, a vital swing state which is particularly exposed to climate change because of the proliferation of hurricanes, and whose tourist industry was opposed to drilling.

But Mr Trump’s conservative base is showing no signs of a change of heart on climate change. Rush Limbaugh, the rightwing radio host who was awarded the presidential medal of freedom by Mr Trump this year, said last week that Democrats wanted “man” to be responsible for global warming because “they want to control your behaviour”.

“If they convince you that your lifestyle choices are the reason why all these fires are firing up out on the left coast, why, what can they tell you? They can tell you to stop anything they want,” he added.