The worst wildfires in US history, Arctic sea ice trending towards a historic low, simultaneous hurricanes in the Atlantic Ocean and the hottest summer in the northern hemisphere since records began: scientists say this year’s sequence of natural disasters and record temperatures have exceeded their worst fears.

“We were speculating 40 years ago about things that might happen, and I don’t think that any of us expected that in our lifetimes, we would see these things unfolding,” said Chris Rapley, a 73-year-old professor of climate science at University College London. “It has become a real problem of today, rather than a predicted problem of tomorrow.”

The natural disasters have brought home the great economic and social costs of a hotter planet, which has warmed by about 1C over the past century.

The wildfires across the US West coast have burnt more than 5m acres, pumping an estimated 110m tonnes of carbon dioxide into the atmosphere, equivalent to the annual emissions of the UK’s entire power sector.

Smoke from the blazes, has travelled high in the atmosphere as far as Northern Europe, according to satellite data from the EU’s Copernicus atmospheric monitoring services.

“The scale and magnitude of these fires are at a level much higher than in any of the 18 years that our monitoring data covers,” said Mark Parrington, a wildfire scientist at Copernicus.

In the US, the smoke has reached as far as New York City and Washington DC, tinting the sky with a visible haze.

While US President Donald Trump has sought to blame the fires mainly on forest management, climate scientists disagree. 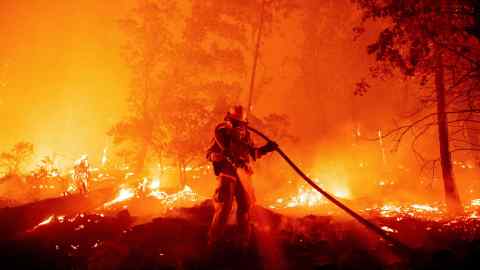 “All of these things that are happening, are predicted consequences of climate change,” said Philip Duffy, head of the Woodwell Climate Research Center in Massachusetts. “People ask if this is the new normal, and I say, no, it will keep getting worse, as long as we keep adding greenhouse gases to the atmosphere.”

Friederike Otto, head of the Environmental Change Institute at the University of Oxford, said record temperatures had meant that “fire weather” — the dry conditions that cultivate wildfires — has become more frequent and more intense.

“Where we really see the clearest and biggest sign of climate change is in extreme temperatures,” she said.

New temperature maximums have been recorded across the world this year from California’s Death Valley, which hit 54.4C, to Russia’s Far East, where 38C was recorded inside the Arctic Circle. In Brazil, one of the world’s largest wetlands, the Pantanal, has been burning since mid-July following a severe drought.

Mr Rapley at UCL compared California to the Sahara Desert — which underwent a big climatic shift and desertification about 6,000 years ago — and said a similar change could be under way. “The California wildfires have come on much more rapidly and are much more disastrous than we had anticipated.”

Other researchers said the impact of global warming had been in line with scientific models but that the human and social cost had been much greater than expected.

“Our societies are really only adapted to a small range of possible weather,” said Prof Otto, at the University of Oxford. “What 2020 shows is that 1C of warming, exactly what we expected . . . already brings our societies toward the edge of what we are able to cope with.”

Fighting the blazes in the US this year has cost $2bn so far, while the total direct cost of fire damage could be as high as $50bn, according to Tom Corringham, an economist at the Scripps Institution of Oceanography near San Diego.

“The scale is staggering,” said Mr Corringham. “These are not transient shocks to the economy, these are permanent reductions in growth associated with climate change.”

As if to emphasise the new pattern of extreme, weather-related events, while California’s forests have burnt, scientists this week identified five simultaneous hurricanes and tropical storms in the Atlantic, for only the second time on record. Hurricane Sally, which made landfall on Wednesday in Alabama and Florida, has brought winds of more than 100 miles per hour. The US is forecasting an “extremely active” hurricane season.

Even so, Tim Lenton, a professor of climate change at the University of Exeter, said it was not in the US but in the polar regions that the signs of irreversible climate change were most concerning.

The area covered by ice in the Arctic Sea is tracking towards a historic low this year, and the Greenland ice sheet has also lost mass.

“It is not just this year’s evidence but a decade of evidence that leads me to the view that we may have passed one or two tipping points already in the climate system,” said Prof Lenton.

The reduction of Arctic sea ice creates a vicious cycle of warming. With less white ice on the ocean’s surface to reflect the sun’s heat, the water temperature rises, leading to even less ice reflecting even less heat — a key reason why the Arctic is warming more than three times faster than the rest of the planet.

“We know in the long run if we keep persisting in heating the planet up, not only do you risk losing this summer sea ice in the Arctic, but eventually you might lose it year round,” said Prof Lenton.