In 2005, after several years of failing to win the hearts of the world’s most exacting shoppers, French hypermarket Carrefour quit Japan. The experience, according to the then chief executive José Luis Duran, had been a “short, expensive adventure”.

On Monday, after an often gruelling 18 years, Walmart became the latest foreign titan to retreat. The US chain’s sale of its majority stake in supermarket group Seiyu is a tacit admission of its frustration with a market that, with the exceptions of Amazon and Costco, no foreign retailer of fast-moving consumer goods (FMCG) has properly cracked.

In 2002, Walmart’s decision to enter the market through an existing domestic supermarket brand was seen as savvy even if some had hesitations over the choice of Seiyu.

It was no surprise that Japan stirred Walmart’s ambitions — just as it had the likes of Tesco and Boots from the UK and Sweden’s Ikea. The country’s retail market remains one of the world’s most valuable and vibrant — an environment that, on the face of it, seems supported by a critical mass of experimental, comfortably-off consumers with a nose for both quality and value. For retailers that get it right, it is highly profitable.

The problem faced, in particular, by the foreign FMCG giants, said Michael Causton, head of the Tokyo-based research group JapanConsuming, is that they have universally underestimated the lock that suppliers have in the Japanese market.

“These retailers hit a brick wall on distribution when they come to Japan. In other markets, the big retailers have wrested power from wholesale. In Japan that is still not the case . . . it means that they just cannot manoeuvre as they would wish on discounting and other strategies. Even local Japanese retailers have tried to take on suppliers and lost,” said Mr Causton.

One of the main reasons for suppliers’ continued grip over pricing is that Japan’s food retail scene is extremely fragmented: historically, even the biggest domestic participants have not had the clout to establish an upper hand. 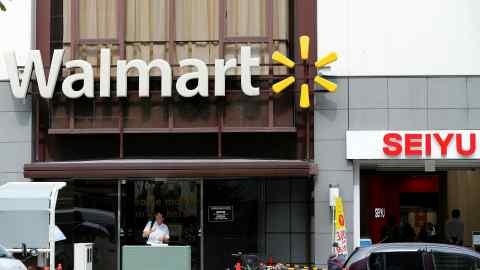 To some extent, Walmart was able to use its firepower after it first acquired a minority stake in Seiyu in 2002, and immediately attempted to export an “everyday low price” strategy first developed in Arkansas. What it found, however, was that price alone was not enough to draw local consumers seeking the freshest food in addition to quality service. Competition was fierce in a market where a tiny local supermarket posed as big a challenge as national brands such as Aeon and Seven & I’s Ito-Yokado stores.

Despite being one of the most ethnically homogenous societies, Japanese consumer tastes are also highly varied. Preferences for everything from soy sauce, vegetables and beef vary from region to region, making smaller, regional participants more competitive in pricing for local products.

For Walmart, Seiyu also posed its own challenge. When the US group struck the initial tie-up, Seiyu had suffered years of under-investment. By the time Walmart assumed control, the global financial crisis struck.

Traditionally, Seiyu’s growth was driven by the location of its stores near railway stations, making accessibility a selling point. But that also made it difficult for Seiyu to open stores outside of big cities in suburban areas, which became a new battleground for other retail groups. “At the very beginning, Walmart chose the wrong company to invest in,” said Akihito Nakai, an independent retail analyst.

Not every foreign retailer has failed: Costco, which opened its first warehouse in Fukuoka in 1999, is a notable exception. Analysts put the US group’s success down to the strength of its private brands as well as its exotic store experience in suburban areas — such as large portions and gigantic store space.

“Whether it’s Tesco or Walmart, ultimately they failed to set themselves apart from highly competitive Japanese retailers,” said Credit Suisse analyst Takahiro Kazahaya. “The few that succeeded won consumers over by offering value that was not provided by Japanese companies.”

After trialling various strategies under Walmart, Seiyu is now generating an operating profit and cash flow, with an estimated annual revenue of $6.7bn, according to analysts and a person familiar with the matter.

But Walmart struggled to find a buyer, according to people familiar with the matter. In the end after almost a year of negotiations, it struck a deal with US private equity firm KKR and the Japanese ecommerce group Rakuten for a $1.6bn sale. How that valuation breaks down between debt and equity has not been disclosed. Walmart declined to comment.

Seiyu’s new owners have one tailwind that Walmart had mostly missed: a nascent but fast-growing $17bn online grocery market.

“It’s true that the retail industry as a whole may be struggling,” said Eiji Yatagawa, a Tokyo-based partner at KKR. “But with Rakuten as a partner, there is also an unprecedented investment opportunity to become a pioneer in a space that has so far lagged in ecommerce.”

Japan recently passed a critical threshold as online sales of goods rose to more than ¥10tn ($96bn) for the first time, according to the Ministry of Trade, Economy and Industry (METI). Even after that rise, however, Japan’s ratio of ecommerce penetration, at 6.2 per cent, is lower than in the US or UK.

Yet many believe the coronavirus pandemic means ecommerce penetration of merchandise sales will break 10 per cent sooner than expected. Amazon, which began selling food about a year ago in Japan, is likely to be an important driver of that.

The world’s largest online retailer appears to have learnt some of the lessons of the unhappy experience of Walmart, the largest brick and mortar retailer, say analysts. It has partnered one of Japan’s largest supermarket chains, Life Corp, which is in turn largely owned by Mitsubishi Corp, the owner of the country’s largest food wholesaler. Online supermarket Ocado has also signed a deal with Aeon.

Seiyu has a chance to crack into this ecommerce market with the two-year partnership between Rakuten and Walmart in online groceries that has largely been successful so far. Noriaki Komori, a Rakuten executive who heads the joint venture, says the business has room to grow with more effective marketing using online consumer data.

“We can offer a new customer experience by integrating the online and offline stores. We can address where the industry is struggling now by really changing the marketing,” Mr Komori said.

Walmart is retaining a 15 per cent stake in Seiyu, which is probably destined for an initial public offering as soon as next year. The US giant can only hope there is a silver lining to its Japanese adventure.