Why TSMC May Be Heading For A Rough Patch (NYSE:TSM)

TSMC (TSM) issued its Q2 quarterly report on July 16th. The numbers beat expectations and the company raised its outlook for 2020. However, while the headline numbers were great and the report contained good news for the most part, there is reason to believe TSMC may be heading for a downturn. Why will be explained next.

In addition to beating estimates, TSMC raised its outlook for the year. Q3 guidance calls for revenue of $11.2-11.5B, an increase of 20.7% YoY at the midpoint. Gross margin is forecast to improve to 50-52% from 47.6% a year ago. TSMC is also upbeat about its prospects for Q4. In fact, TSMC expects revenue growth for 2020 to exceed 20%, which is higher than the previous forecast of mid to high teens. In another sign of confidence, TSMC increased its capex spending budget for 2020 by one billion to $16-17B.

However, while the headline numbers look great, TSMC does not see smooth sailing everywhere. COVID-19 is disrupting the global economy in various ways and that is having an impact on TSMC. Almost all platforms declined sequentially in Q2 with the exception of HPC. TSMC expects more good things from HPC and 5G. From the Q2 earnings call:

“Our second quarter business increased slightly in U.S. dollar terms as continued 5G infrastructure deployment and HPC related portal launches offset weakness in other platforms. Moving into third quarter 2020, we expect our business to be supported by strong demand for our industry-leading 5 nanometer and 7 nanometer technologies, driven by 5G smartphone, HPC and IoT related applications.”

A transcript of the Q2 2020 earnings call can be found here.

Another downer is Huawei. TSMC has not accepted any new orders from Huawei since the U.S. government issued new regulations last May that are relevant to foundries like TSMC. Existing orders will be carried out until September 14th, which implies that there will be no significant impact to Q3.

“We are complying fully with all the regulation and we did not take any new orders or production starts from this customer since May 15… But under this current status we do not planning to ship wafers after September 14. And yes, there will be a challenge to work dynamically with other customers”

Nevertheless, TSMC believes it can overcome both of these challenges in COVID-19 and Huawei. TSMC expects other customers to pick up the slack in the absence of Huawei due to its technological leadership. The company backed that assertion with a technology roadmap that included several new process nodes, an enhanced version of N5 called N4 and a new node in N3. Both nodes are scheduled to start volume production in 2022.

However, while 2020 may be okay, 2021 could turn out to be a different story. First, comps will become harder from here on out and especially in the new year. TSMC expects revenue growth of above 20% in 2020, which is above the company’s CAGR goal of 5-10%.

But comps don’t tell the whole story. It’s probably no coincidence that the recovery started in Q2 2019, because that also happens to be the quarter the U.S. government first imposed sanctions on Huawei in May 2019. Since then, more companies from China have joined Huawei on the Entity List.

One of the consequences of U.S. sanctions is that companies like Huawei began stockpiling additional inventory of semiconductor chips, including the ones designed by its own chip design subsidiary called HiSilicon and fabbed at TSMC. Many had anticipated U.S. sanctions, including the most recent ones in May that deal with foundries. Companies in China decided to put in as many orders as possible before they got cut off. There are statistics that support this assertion.

For instance, Chinese customs data show a big increase in chip imports in the second half of 2019. While chip imports by volume declined by 5.3% in H1, they ended the year up by 6.6%. This implies that there was a surge of imports starting around the same time Huawei was sanctioned. This jump in imports continues to this day.

In terms of quantity, China’s imports of ICs increased by 25.5% to 242B in H1. The amount spent on IC imports increased by 12.2% to $154B. Keep in mind that these numbers have to be put into the right perspective. They come against a backdrop of weak imports and exports due to reduced international trade and a worldwide recession because of COVID-19. The jump in IC imports stands out against such a weak backdrop.

In the first half of 2020, China’s GDP contracted by 1.6%. The value of China’s exports and imports has declined by 3% and 3.3% respectively. Certain export segments that are heavy consumers of semiconductors are down by even more. For instance, mobile phones are the number one driver of semiconductor demand. But China’s exports of mobile phones in terms of quantity and value has declined by 11.7% and 3.2% respectively.

External demand is weak, but internal demand is not much better. H1 wholesale and retail trades are down a combined 8.1% in China. While it’s true that 5G phones are gaining ground in China by accounting for 63.6M units, total shipments of mobile phones still declined by 17.7% YoY to 153M. If the vastly increased number of imported chips heading to China are not being consumed through exports or domestic sales, then the only remaining destination is inventory.

Chinese companies seem to be busy stocking up on semiconductors to prepare for possible supply chain disruptions. Further evidence of stockpiling can be found by looking at Huawei’s share of revenue at TSMC. According to the 2019 annual report:

Huawei’s share jumped to 14% of revenue in 2019 from less than 10% the year before. While the 2020 numbers have yet to be disclosed, it’s likely that Huawei accounted for a bigger share in the first two quarters if we take trade statistics into account.

All this points to inventory building in China by Huawei and others. These inventories serve as a hedge against possible U.S. sanctions and to deal with potential disruptions caused by COVID-19. If the recent surge in revenue at TSMC was driven by Chinese companies stockpiling inventory, then it’s only natural that their absence, for whatever reason, will lead to lower revenue growth or even contraction. Sales seem to have been pulled forward. At some point, this process must stop and even reverse, possibly starting in 2021.

TSMC does acknowledge the possibility of a future correction triggered by excess inventories. From the earnings call:

“The inventory level of our fabless customers that we track exited first quarter above the seasonal level. We expect a further increase in second quarter, and then stay at the high level in the second half … We cannot rule out the possibility of an inventory correction sometime down the road.”

The impact will not only come from the absence of Huawei. Other Chinese companies have apparently brought forward orders from U.S. companies to deal with COVID-19 disruptions or possible future sanctions from the U.S. Many of these companies are customers of TSMC, including AMD (AMD) and Nvidia (NVDA) that helped drive HPC growth. If fabless firms sell less because of an inventory overhang, then TSMC can expect less demand for foundry services in the not too distant future. 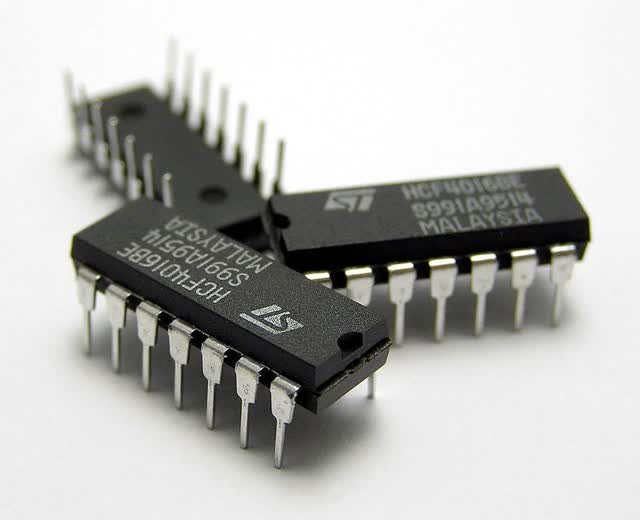 But a closer look suggests that real demand for semiconductors is not as strong as the headline numbers suggest once the distortions of inventory building in China are taken into account. Data out of China suggests that the strong growth at TSMC, starting in Q2 2019, was triggered by the need for Chinese companies like Huawei to build inventories to ward off possible disruptions to their supply chains. The U.S. government provided the initial catalyst, only to be followed by COVID-19. There is even reason to believe that inventory building may have started even sooner as discussed in another article.

Even TSMC sees rough waters ahead, although it’s confident it can handle them. The forecast calls for 2020 revenue growth of at least 20%, which seems bullish. On the other hand, Q1 and Q2 revenue grew by 42 and 28.7% respectively. So if Q3 sees revenue growth of 20.7% according to guidance, it’s implied that there will be a deceleration in Q4 growth. Revenue could even begin to contract sometime in 2021.

Having said that, the long term prospects of TSMC remain bullish. It may take some time, but eventually excess inventories will be wound down. Lost customers can be replaced. Capacity can be filled with other customers. It will just take time. TSMC will remain the dominant foundry in the foreseeable future with an edge in technological leadership that will not be easy to overcome. Going through a rough patch of shrinking revenue does not change that.

What it could do is put pressure on the stock since the market may have to adjust to much lower growth after growing accustomed to double digit numbers. If TSMC begins to report disappointing quarterly results after the recent string of strong growth numbers, the stock could weaken and create a lower entry point for longs. Longs may want to consider locking in profits, especially after the recent runup, and get back in at a later point. Anyone who is convinced of the long-term prospects of TSMC can continue to stay the course. Just do not be surprised if the pace of growth starts to quickly decelerate in Q4 and 2021 winds up to be a down year for TSMC.