OPEC mulling the possibility of cutting even deeper than the 1.2mbpd committed under the aegis of the Vienna Alliance has been the main news of the past seven days. The root cause for such a seemingly hasty decision lies in crude demand slowing down across all continents – roughly a year ago most analysts would have forecast that demand would catch up with supply at some point in 2020 if the OPEC+ deal remained intact, current estimates deem it highly unlikely. The Vienna Alliance would also move towards a much stricter quota compliance as Iraq and Nigeria have been either falsifying their actual production numbers or purely selling gold bricks (i.e. Nigeria excluding the 27 API Egina crude from its reported volumes as it considers it a “condensate”) – by getting them to comply OPEC could clear some 0.4-0.5mbpd of crude if needed. 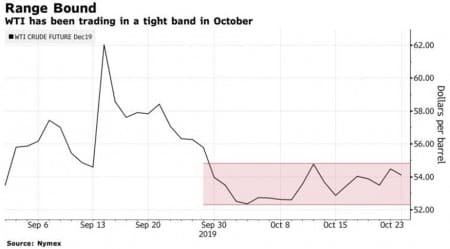 The interaction between OPEC’s stated intention to do more in the post-March 2020 horizon and US commercial crude stocks rising for the second consecutive week have brought global crude benchmark Brent to $59.5-59.8 per barrel, whilst US benchmark WTI was assessed at $54.2-54.5 per barrel. 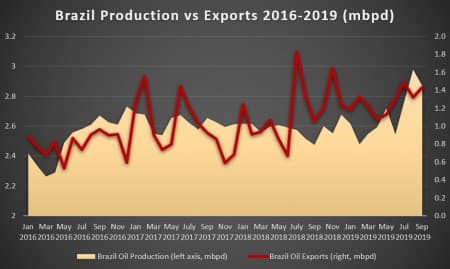 – New pre-salt platforms ramping up production have helped Petrobras, the world’s most indebted oil company, to grow its production quarter-on-quarter by a sizeable 10 percent.

– Thanks to the 10-percent hike Petrobras’ 3Q 2019 output averaged 2.264mbpd, with two fields playing a major role – Buzios and Lula, both of which saw new 150kbpd platforms reach full capacity this September.

– Petrobras intends to put another 150kbpd production platform onstream in November 2019, thus the Q4 2019 output numbers should be even more appealing.

– At a production level of some 2.9mbpd so far in October 2019, Brazil’s aggregate oil output is getting increasingly closer to breach the heretofore insurmountable 3mbpd threshold.

– Investor confidence in Petrobras was further boosted by media reports that the Brazilian NOC will manage all the crude that the state receives from private firms active in pre-salt plays.

– This will allow the state not to get involved in prolonged auction procedures, all the while beefing up Petrobras’ 0.6mbpd trading portfolio. 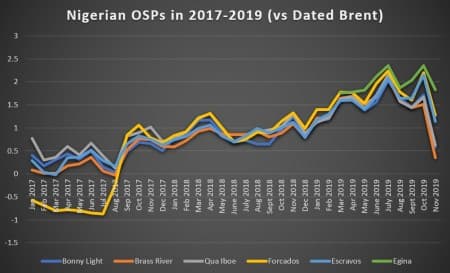 – Nigerian flagship crudes Bonny Light and Qua Iboe witnessed month-on-month decreases of $1.14 and $1.04 per barrel, to $0.58 and $0.63 per barrel premiums against Dated Brent.

– Meanwhile, spot prices for both Bonny and Qua slid below Dated as WAF-East Asia freight rates surged to WS300 last week, although they are widely expected to move back.

– November OSPs for medium sweet Bonga and Forcados fell by 92 cents m-o-m, yet recent addition Egina only dropped 52 cents per barrel (to a $1.83 per barrel premium against Dated) as keen European interest shielded the grade from a severe blow.

– WAF-East Asia freight rates have eased to WS110-120 early this week, meaning that it is only a matter of time when Nigerian FOB differentials recover. 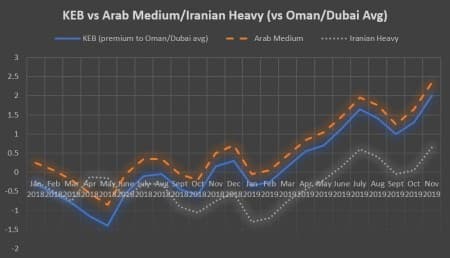 – Kuwait’s state oil company KPC has issued its November-loading official selling prices, hiking Asia-bound prices of its flagship KEB crude by 70 cents per barrel to a new high of $+2.00 per barrel against Oman/Dubai.

– Thus, KPC has kept the Kuwait Export Blend-Arab Medium spread intact from last month, all the while narrowing the KEB-Iranian Heavy spread by 10 cents per barrel.

– KPC has dropped NW European prices even more drastically than Saudi Aramco, by $1.60 per barrel to a $-6.25 per barrel discount to Dated, whilst conforming with the Saudi-set reduction in the Mediterranean.

– Kuwait has been advancing in the Neutral Zone negotiations with Saudi Arabia, with the Middle Eastern country’s Foreign Ministry lauding the amicable atmosphere of the talks and foreshadowing a mutually beneficial resolution.

– Argus has reported last week that Khafji Joint Operations, operator of the 300kbpd offshore Khafji field owned conjointly by the two countries’ NOCs, has been instructed to get ready for a January 2020 restart. 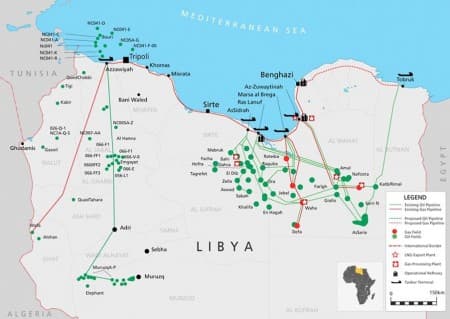 – Russian oil company Tatneft has expressed its readiness to fully resume operations in Libya, 5 years after it was compelled to halt works on all 8 of its blocks there.

– Tatneft secured the blocks in the Ghadames and Sirte Basins in the 2005-2006 Bidding Rounds and expected first oil in 2011.

– Spread over a 16 000 square km, Tatneft’s is bound to receive 11-12% of excess cost oil from its acreage under the provisions of the PSA.

– Having already invested $260 million in 2006-2014, Tatneft might be expected to start up its Sirte Basin blocks first as they lie deep in LNA-controlled territory, i.e. might be considered safe given Moscow’s working ties to Field Marshal Haftar.

– Tatneft, Russia’s 5th largest producer with most of its 600kbpd production concentrated in the Volga-Urals region, has invested in the 2000s into Libya and Syria, only to see both countries implode in the 2010s. 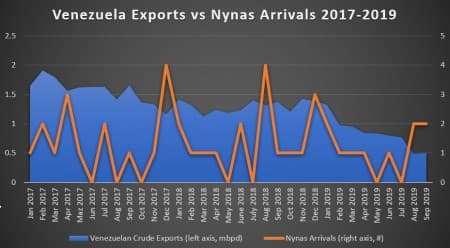 – Even though the US Treasury has extended Chevron’s 3-month waiver to operate in Venezuela through January 22, 2020, PDVSA’s maneuvering space has been reduced again.

– Nynas, a joint venture between the Finnish Neste Oil and PDVSA, was granted a 6-month waiver from the US Treasury with the proviso that it stops buying Venezuelan crude.

– Nynas, a specialty producer of naphthenic oils and bitumen products, took in on average 2 cargoes of Venezuelan crude (roughly 1MMbbl per month).

– Confronted now with a full ban on any „transactions to the purchase of Venezuelan-origin petroleum”, Nynas will have to reassess its import strategy.

– Throughout this year Venezuelan crude was the prime feed of Nynas, it only bought 2 Aframax cargoes of UK North Sea crude Captain apart from it.

– Venezuelan exports have stabilized around the 0.5mbpd mark in August-October 2019, with „blending hub” Malaysia emerging as the main market outlet for it in September 2019. 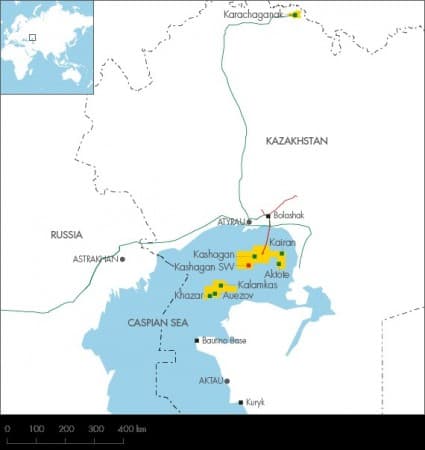 – The North Caspian Operating Company, a consortium of majors that operate the supergiant Kashagan field in Kazakhstan, has relinquished its rights to the 1.2 Bbbls Kalamkas-Sea field adjacent to Kashagan.

– Concurrently, Royal Dutch Shell announced it will no longer develop the 0.5 Bbbls Khazar field and has waived its participation, despite having already invested some $900 million.

– The two developments signal future difficulties for Kazakhstan as the Kalamkas-Khazar hub was expected to become the second wave of offshore developments in the mid-2020s.

– Both Kalamkas-Sea and Khazar lie in shallow waters of 5-10 meters and need to be interconnected by a web of artificial islands, just as it was done in the case of Kashagan.

– Despite its proximity to Kashagan, the two fields form part of a different basin (North Ust-Yurt), containing no salt in the section.

– Yet the investors’ main grievance was that under current market prices and, under Kazakhstan’s current tax regime, developing Kalamkas or Khazar is economically unviable.

– The Kazakh government can seek new investors for both projects once it reclaims the subsoil rights – a difficult feat to achieve given the increased tax load (compared to 2001 when NCOC was established).

7. Yemen Restarts Output in a Bid to Play Down War Risks 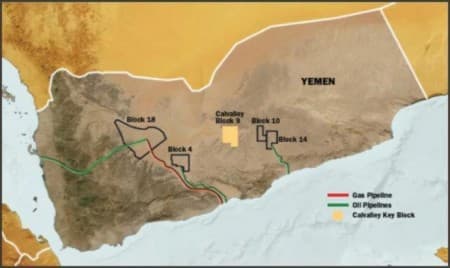 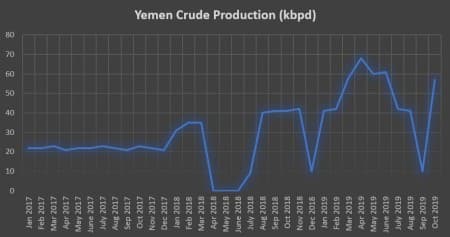 – In a sign of better times to come, Yemen’s internationally recognized authorities have restarted production from the Marib Region’s Block 18, albeit at a meager rate of 20kbpd.

– The state-owned Safer E&P company that operates the field intends to bring back the field to its pre-civil war production level of 40kbpd, which, it contends, is just a fraction of its actual potential.

– Block 18 production was previously fed to the port of Ras Issa on the Red Sea coast, yet with the port being in Houthi hands the crude will have to be trucked to the OMV-operated Block 04.

– OMV’s Block 04 provides the only safe export conduit for Yemeni crude – the Austrian oil firm has been producing some 40-45kbpd of Shabwa crude uninterruptedly from September 2018.

– Before the war, the gas production of Block 18 fed the 6.7mtpa Total-operated Balhaf LNG plant, however, the French major is still reluctant to restart its Yemeni operations unless it can guarantee the security of its specialists.