Why Nordstrom Is A Hard Pass (NYSE:JWN) 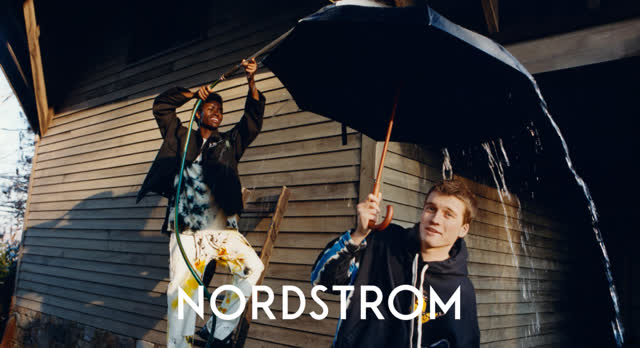 Off-price and luxury retailer Nordstrom (NYSE:JWN) is a stock I’ve been hot and cold on in the past. The company has been a perennial go-private target thanks to its Nordstrom family ownership and presence in management, as well as its transformation away from focusing so much its legacy big box stores and into more contemporary off-price. This is a process that has had fits and starts at times, resulting in varying degrees of success.

Last December, I said Nordstrom needed a breather and was a bit bearish on the stock at that point. Shares traded for $40 at that time and today are less than half of that, available for acquisition at just $17. Nordstrom was pounded by store closures earlier this year, which of course isn’t just Nordstrom’s problem. But given the somewhat tenuous position it was in prior to the shutdowns, Nordstrom is coming out of this crisis a bit worse off than it was. For that reason, I think the stock is fully priced today, and therefore doesn’t offer investors enough margin of safety to buy. While I’m not necessarily bearish here, I think longs need to wait for a better price given all the headwinds facing Nordstrom today.

It has been a long time since Nordstrom was a growth company. Its leverage to the big box department store model has been an Achilles’ heel for years, but to its credit, Nordstrom purchased several much smaller startups and opened its Rack concept to clear off-price merchandise. These moves made a business that was a dying breed of retailer into one that had a sporting chance.

As we can see, revenue growth was slight, but positive for the past few fiscal years until fiscal 2020, which ended in February. The problem for Nordstrom has been and continues to be its exposure to its legacy Nordstrom stores. They provide huge amounts of revenue but their popularity, as I mentioned, has waned for some time.

Comparable sales for the legacy stores have been quite poor for years, and while Rack has helped offset that with gains, in addition to things like Trunk Club and Hautelook, the consolidated company has struggled.

Revenue is expected to decline by about a quarter this year, with a strong rebound into next year as stores should be open the entirety of the year, which is more than one can say for this year. Even still, revenue is slated to only rebound by about two-thirds of the expected decline for this year, meaning it will be fiscal 2023 or 2024 before last year’s revenue number is seen again, if ever. That’s a sobering thought when evaluating Nordstrom as a long candidate.

In addition to revenue struggles, Nordstrom is grappling with a lot of debt.

We can see net debt ended the most recent fiscal year at $1.8 billion, but emergency precautions taken to survive the COVID-19 crisis have estimates at $2.4 billion by the end of this year, and slightly lower next year. That’s a lot of additional debt, and for some context, the company produced just over $800 million in EBIT last year. In other words, net debt is slated to be ~3X fully normalized EBIT by the end of this year.

The impact of that can be seen below, with EBIT and interest expense in millions of dollars.

Capital returns and the valuation are yet more evidence

Apart from revenue and debt problems, Nordstrom is facing another issue for earnings-per-share growth; its lack of share repurchases. Below, we can see Nordstrom’s capital allocation strategy in normal times. 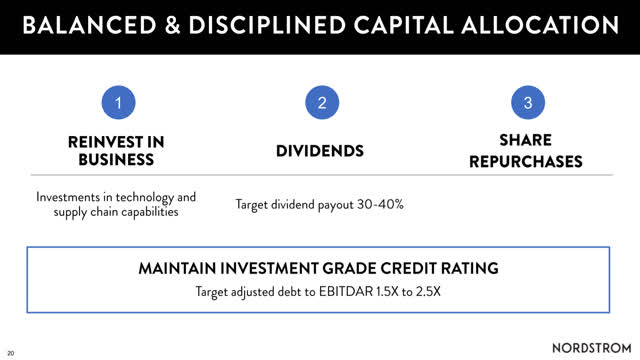 The company favors growth investments over dividends, and lastly comes share repurchases. Nordstrom is pulling back capex this year because it has to, just like countless other companies caught in the midst of COVID-19-related shutdowns. The dividend is gone for now, and share repurchases have been halted for the same reason. Collectively, these moves will save precious cash for Nordstrom to weather the storm, but for a potential investor, they are quite off-putting.

One thing you could always count on with Nordstrom is a juicy dividend yield and some buybacks to help boost flagging earnings. But with those out of the picture indefinitely, I honestly don’t see anything here I’d want to run out and buy the stock for these days.

The picture is equally as grim when we look at earnings estimates, which are below.

EPS was $3.37 last year and was slated to be somewhere in the neighborhood of $3.40 to $3.50 this year before the crisis. Earnings will be very negative this year, which is no surprise. Next year is where I get worried because current estimates are for just $1.57 in EPS, which is less than half of what this company produced last year.

Lower revenue and soaring interest expense aren’t helping, and the company’s years-long struggle with rising SG&A costs will almost certainly weigh on it as well. With no catalysts I can see to get out of the rut it is in, Nordstrom looks fully valued today at ~11X next year’s earnings. Keep in mind fiscal 2022 won’t be complete for another year and a half or so, and there is plenty that can happen between now and then, both good and bad.

But when I put all of this together, you have a stock with no dividend, no buybacks, a huge debt load, soaring interest expense, waning revenue, and margin issues. That doesn’t sound overly appetizing, and as a result, I think Nordstrom is a hard pass for investors.