Mexico and IMO 2020, what a tremendous pairing. The Mexican national oil company PEMEX has been one of the few lucky free-riders of the US sanctions frenzy that saw most of Iranian and Venezuelan exports eliminated from the world markets. With heavy sour barrels rare and difficult to get, Mexico’s sulfurous crudes have become a sought-after commodity, both in the US Gulf Coast and Far East Asian demand hubs. Yet IMO 2020 might cut short PEMEX’s easy ride of the past couple of months, biting a chunk out of its refinery economics and export revenues. The Mexican NOC is cognizant of the upcoming risks and has amended its decades-old crude pricing formulae yet will it be enough?

Last week PEMEX finalized its oft-mulled drive to revamp the pricing formula of its flagship crude Maya, surprising many with its ambitious scope. The previous Maya formula looked the following way:

It incorporated the US Gulf Coast’s erstwhile sour leader West Texas Sour as well as Louisiana Light Sweet (38-39 API, 0.4 percent Sulphur), all the while mirroring the Gulf price of high-sulphur fuel oil. The latter’s inclusion is primarily due to the almost unprecedently high HSFO yield of Maya, standing at 39 percent. The massive fuel oil yield comes as no surprise if we are to remember that Maya’s density hovers around 21-22 API and its Sulphur content stands at 3.4-3.5 percent.

The new pricing formula is interesting for a variety of reasons, let’s analyze them one by one.

Perhaps the subtlest change here is the change of provider – heretofore all the prices came from Platts, now Argus has moved into the top spot. This in itself would presuppose a certain propensity to link Maya to US prices as S&P Platts has been the indisputable price source for Europe and most of Asia, whilst Argus has been trying for some years to make its WTI Houston the #1 global benchmark, overtaking the Platts-set Dated Brent. Yet there is more to it then just a change in price providers.

If you looked closely then you realized that PEMEX eliminated WTS and LLS from the price formula – both became rather obsolete by 2019 due to their relative insignificance. If not refined by Midland and Texas refiners, West Texas Sour is now predominantly used as a blending component into ever-lighter Permian production to blend regular WTI, hence its international significance has faded into oblivion. Louisiana Light Sweet met a similar fate – with the overall LLS stream dropping to a mere 60kbpd, most of the output is refined in Louisiana refineries. Even if some LLS leaves the United States, it more often than not ends up in Canada or Colombia so the crude’s international impact is limited.

If Maya is a heavy sour crude, why would PEMEX replace a sour benchmark (WTS) with a light sweet one (WTI)? Presumably, two things – flexibility and liquidity, as WTI’s massive international presence would shield from unsolicited price volatility. The Mexican NOC still retains the possibility to tinker with Maya’s adequate pricing level by means of the K-factors, PEMEX’s very own brainchild that acts as an intra-month price balancer. Still, the fact that heavy sweet Maya will be priced against light sweet WTI and Brent is a novelty for the Mexican market, just as much as the exclusion of USGC HSFO from the pricing formula. Despite the September surge in HSFO prices (thanks to which Maya was traded at a premium over WTI Houston on a couple of instances), PEMEX sees the HSFO link as the ultimate liability.

Ironically, however, HSFO is what PEMEX knows best. Mexico’s refinery runs have taken quite a walloping in the Peña Nieto years, dropping from an average monthly rate of 1.1-1.2mbpd in the first half of the 2010s to some 0.6-0.7mbpd in 2016-2018. Although the 11 months under Lopez Obrador witnessed a gradual upward movement in refinery runs, PEMEX can only ramp it up to a certain degree – Mexico’s refineries were configurated to refine light crudes which become increasingly rare. Only 3 refineries (out of the 6) have coking units – moreover, the ones that have them tend to be the smaller ones, i.e. PEMEX’s largest refineries, the 330kbpd Salina Cruz and the 320kbpd Tula refineries, do not have coking systems. 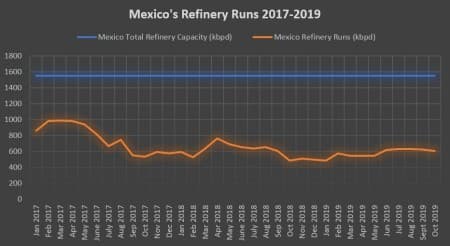 Against the background of a general decline in Mexican production, it is light grades that have suffered the most – in the past 5 years, light barrels saw a 35 percent drop. One of the major causes behind this saddening trend are unforeseen water inflow problems at the country’s leading light field, Xanab. With crude production tilting towards the heavier side and refineries not being able to refine them accordingly, Mexico has ramped up its imports of finished motor gasoline from the United States and has flirted for quite some time already with direct imports of light US crudes (inconvenient politically as AMLO has declared Mexico’s own quest for energy independence). Despite this, the share of fuel oil in refinery output rose more than 8 percent in the last 5 years, reaching 29.5 percent currently.

PEMEX is fully cognizant of the challenges such a shift entails – it has fast-tracked fields that are predominantly light, whilst putting heavier discoveries on the back burner if needed. The Mexican NOC has been pushing to see production from shallow-water fields like Xikin (peak production of 70kbpd), Esah (23kbpd), Koban (46kbpd), Kinbe (24kbpd) or Ixachi (80 kbpd, starting from 2022-2023) as soon as possible. Most of the above-mentioned fields contain crude which is medium density sweet (i.e. a bit heavier than Xanab and other legacy fields), although there are notable exceptions, too – the 1Bbbl Ixachi discovery has so far yielded 40° API crude. Also, the basic premise of building the 340kbpd Dos Bocas Refinery is Mexico’s need for a sophisticated refinery, capable of refining the heavy ends, too.

READ ALSO  Chuck Schumer: the man who must steer the Biden agenda 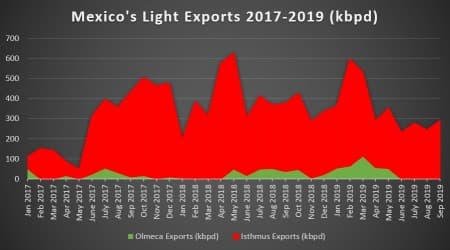 But let’s come back to the PEMEX export formulae. The changes made to the pricing formula of flagship crude Maya will become valid from mid-November onwards, meaning that for December-loading vessels the new rules would already apply. The formulae for Isthmus and Olmeca so far keep their pegs to WTS and LLS (for USGC-bound cargoes) or 3.5 percent Sulphur Fuel Oil (for Europe-bound vessels). As HSFO is expected to plummet before the onset of 2020, it is assumed that these grades will also see a change towards a lighter peg, similar to Maya. Whilst Isthmus exports YTD stand at 315 kbpd (down from 360kbpd last year), Olmeca exports average a mere 37kbpd this year so perhaps there is no real urgency in revamping their pricing.