Several years ago, a wise colleague wrote a wonderfully contrarian column arguing that no organisation should hire more than a few very clever people. Sure, they’re great with facts, abstract ideas and vigorous debate. But put too many of them in a room together, and they can gum up the system with their love of complexity and conflict.

As we “knowledge workers” know, clever people aren’t always the most collaborative. And what they have in brainpower, they often lack in empathy. We live, after all, in a cognitive meritocracy in which IQ is valued much more highly than EQ (emotional intelligence) or most physical abilities. Those who want to succeed are incentivised to use their head — neither hearts nor hands get quite as much exercise.

We are all the poorer for it, according to political analyst David Goodhart, whose new book Head, Hand, Heart looks at how and why “smart people have become too powerful”. It’s one of a number of new works that circle around the topic of meritocracy, and how it has created a dangerously unbalanced world by rewarding a small sliver of brain workers so disproportionately.

The coronavirus pandemic has, of course, briefly illuminated how essential other types of workers — such as nurses, care-givers and delivery drivers — can be. But while we laud these professions on the signs we post in our windows during quarantine, it’s clear who society’s winners really are: highly educated, or at least highly credentialed, global elites — the sort of people who crunch numbers, trade stocks, programme software, write newspaper articles like this one and speak fluently in the officious and all too often emotionally distant patois of their breed.

They represent a new ruling class who may be even more toxic than the hereditary upper crust that came before them, according to both Goodhart and Harvard philosopher Michael Sandel, whose book The Tyranny of Merit looks at how meritocratic striving is undermining social cohesion and liberal democracy. According to Sandel, who focuses mainly on the US, the American dream of being able to bootstrap your way to success has become a myth. It used to be that you could make it if you studied hard enough. Now, it’s much more likely that you can make it if your parents can afford thousands of dollars in admissions test prep, or hire a counsellor to beef up — or even fake — a CV good enough to secure your admission to an Ivy League college.

It wasn’t meant to be like this. Merit­ocracy was supposed to be better than the restrictive social structures of the past, when family and social ties determined outcomes. Over the past several decades, as traditional class structures in countries such as the US and the UK began to break down, they were replaced by a new system of educational and professional advancement based on test scores, grades and intelligence, at least as narrowly defined by IQ. Suddenly, smart working-class kids could become part of a meritocratic elite.

But there was a dark side. As British sociologist Michael Young observed in his prescient book of dystopian fiction The Rise of the Meritocracy (1958), for all the flaws of the old class system, its moral arbitrariness prevented both elites and the working class from believing that they somehow deserved their position in life.

Both Goodhart and Sandel, who blend facts, analysis and opinion in eminently readable non-fiction, cite Young’s work and are clearly inspired by his viewpoint. As Young put it, “now that people are classified by ability, the gap between the classes has inevitably become wider. The upper classes are . . . no longer weakened by self-doubt and self-criticism.”

Meanwhile, members of the working class must judge themselves not by their own standards — in which traits of character, experience, common sense and grit are often as important as test-based intelligence — but by the standards of the meritocratic elite. Without the appropriate degrees, professional qualifications and opinions sanctioned by their educated overlords, they were all too often deemed unworthy — or as Hillary Clinton once put it in a quip that helped end her political career, “deplorables”.

In their book Deaths of Despair, Anne Case and Angus Deaton spelt out the toll this has taken on working-class white men in particular. Contempt can be just as lethal as poverty — low status in a hierarchy produces the stress and anxiety that trigger immune system-damaging cortisol to be released in the body. Deprived of respect and out of sync with the changing culture of their country, some of the white working class came to feel like “strangers in their own land”, to borrow the title of sociologist Arlie Russell Hochschild’s book on the rise of rightwing populism in the US south.

One of the tragic ironies of the past few decades is the way in which such people have been abandoned by their traditional champions on the left. Take the Clintonian wing of the Democratic party. Despite Bill Clinton’s much heralded ability to “feel” our pain, many of his initiatives as US president — trade deals that hollowed out parts of the rustbelt; tax and financial policies that benefited those who made their money from investments rather than income — were crafted by technocrats who worked at an algorithmic remove from the lives of real people.

The result was the election of Donald Trump — a product of the hereditary elite who would have been nothing without his family’s money. He famously quipped after a 2016 primary victory, “I love the poorly educated.”

As Goodhart outlines, Trump won in part because he bypassed the usual heady and all too often alienating technocratic policy language favoured by the Clintons or Barack Obama, and went straight for the gut, purposely driving home the painful truth — that elites of all political stripes tend to look down on the poorly educated. “Credentialism is the last acceptable prejudice,” writes Sandel. He offers statistics showing that in the UK, US, and parts of Europe, college-educated respondents actually have more bias against less-educated people than they do against other disfavoured groups.

A college degree won’t give you empathy. But it was supposed to guarantee you a good job. The idea that education would improve “human capital”, thus making workers and countries more productive, was at the heart of the market-based Chicago school approach to economics so beloved by the meritocracy. This idea is explored more fully in the wonderfully detailed The Crisis of the Meritocracy by University of Cambridge professor Peter Mandler, who examines the tensions between democracy and meritocracy.

But these days, even a college degree will only take you so far, thanks to the education arms race at the heart of the meritocracy. The idea that everyone needed such a credential, whether or not the job required it, has led to a “professionalisation” of jobs such as nursing.

Yet as Goodhart lays out, it has neither improved outcomes, nor job satisfaction. This is due largely to the way that professionalisation has decreased the time spent on low-status tasks such as caring (which, it should be said, have traditionally been done by women), and increased the amount of bureaucratic paper-pushing. Goodhart adds that in recent years, while high-level know­ledge workers have enjoyed increased levels of autonomy in their jobs, those with routine or semi-routine jobs have seen it decrease radically. That increases stress too — think about Uber drivers or Starbucks baristas whose lives must be organised around algorithmic scheduling software.

At a societal level, increasing amounts of education haven’t actually decreased social inequality — partly because the people best-placed to take advantage of all that education tend to be rich and privileged already. Sandel notes that in the US the chance of students from households with more than $200,000 in income scoring above 1,400 on the SAT college admission test is one in five. For those from families that make less than $20,000 it is only one in 50.

The same correlation between wealth and test scores exists in Britain. Mandler notes that countries such as the Netherlands and Sweden have done much better than the UK at decreasing inequality — not because they’ve expanded education, but because they’ve used wealth redistribution to make class distinctions less stark.

In the US, the crushing burden of student debt — now a whopping $2tn — has become its own headwind to social mobility. Students struggle to get into the right university, then work part- or even full-time while studying to try and pay for that education, which makes it harder to do well, which increases their chances of dropping out and ending up worse off than when they began. Indeed, the Federal Reserve Bank of New York believes the consumption-dampening effects of student debt to be one of the biggest mid- to long-term challenges for American economic growth.

Even for elites who don’t have to worry about costs, life in this hamster wheel is oppressive. One Harvard admissions officer quoted in Sandel’s book worries that those who spend their high school and college years jumping through hoops of high achievement wind up as “dazed survivors of some bewildering life-long boot-camp”. While the essay is posted on the admissions website, it clearly has yet to deter the eager hordes of strivers hoping to seize the Ivy League gold ring.

And yet all these authors speculate we could be on the cusp of a pushback against the meritocracy. Market forces may come to favour heart and hand work as more brain work is done by artificial intelligence. Goodhart makes a case for public investment in the built environment and healthcare — another fillip for hearts and hands. Sandel believes our winner-takes-all free market system will need to be reformed also.

That view may be part of what motivates the young white elites marching with people of colour as part of the Black Lives Matter movement. They are protesting against injustice. But they are also protesting against a system that pits all against all, and rewards a smaller and smaller group of people at the top. No wonder there are signs that millennials are starting to eschew credentials and earning power for personal time. 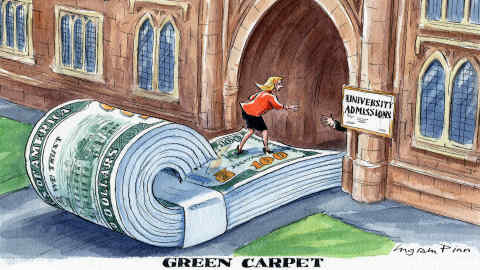 Nobody would argue for going back to a hereditary class system. But the meritocracy must evolve. In his 1958 book, Michael Young predicted that the hubris of the meritocratic elites would eventually trigger a political revolt resulting in their downfall. Is that where we have come? Or where we are going? Whatever the November election result in the US, or the ultimate outcome of Brexit, we would be wise to heed Young’s advice. If people were valued according to their kindliness, courage, imagination and sensitivity, and not just their intelligence, education, occup­ation and power, there would be not classes, he wrote. “Every human being would then have equal opportunity, not to rise up in the world in the light of any mathematical measure, but to develop his own special capacities for leading a rich life.” Perhaps in some post-meritocratic world, it will be so.

The Crisis of the Meritocracy: Britain’s Transition to Mass Education Since the Second World War, by Peter Mandler, Oxford University Press RRP £25, 384 pages