Why investors have suddenly turned bullish on a divided US government

Home Financial news Why investors have suddenly turned bullish on a divided US government
2020-11-052020-11-05By finanz.dk

Investors are rubbish at trading big political events. The latest example, of course, comes from the US elections, which they misread yet again.

Sucked in by opinion polls that suggested a big win for Democratic presidential candidate Joe Biden, and for his colleagues running for Senate, many had built up “reflation trades” — bets that a huge splurge of fiscal spending would jack up moribund inflation, weakening both government bonds and the dollar in the process.

Instead, Mr Biden appears to be crawling over the line to victory, and the Senate is likely to remain red.

The “blue wave” trade has therefore crashed on the rocks, generating the biggest rally in 10-year Treasuries since March, and one of the biggest rallies in US government bonds after any election in at least two decades.

Finger-pointing has started. Deutsche Bank strategist Jim Reid called it “one of the worst opinion polling performances in history”. Didier Saint-Georges, a member of the strategic investment committee at French investor Carmignac, said that peers who had placed their faith in pollsters should “have a serious look at their systems”.

This is a reasonable point: how can market participants attempt to read political situations if the political nerds cannot do it either?

Investors failed, spectacularly, to see the Brexit referendum result coming in 2016, generating what was at the time a historic crash in sterling. Later that same year, they also failed to anticipate a presidential victory for Donald Trump, sending stocks on a brief but ugly decline before markets latched on to what would be a huge corporate tax-cutting agenda.

Surely, then, believing the polls and jumping with both feet into the blue wave trade was foolish?

To most investors’ credit, though, it seems they did not. They may be shaky on elections, but they know it. The reflation trade built up, and then popped. But investors were not overcommitted.

JPMorgan Chase pointed out that Treasury market bets had swelled to above-average levels. Still, money markets had shifted to anticipate just one US interest rate rise by the end of 2023 and two by the end of the following year. “It would be a stretch to say that investors had pre-positioned for a regime change in fiscal policy and the inflation outlook,” said the bank’s John Normand. Similarly, shifts into blue wave stock bets — on value stocks, cyclicals and Asia — had generally been “too small to suggest strong commitment”.

The damage inflicted on portfolios by this faulty reflation bet is, at most, modest. In sharp contrast to chaotic scenes in markets after the Brexit referendum and on the night of Mr Trump’s election, overnight trading was calm, orderly and, in some asset classes, quieter than on an average day.

The prudent path now, then, would be to wait for the full results from the vote, both for president and Congress, before rejigging portfolios. Some investors are doing just that. “Trading the outcome in this environment doesn’t make sense,” Fabiana Fedeli, global head of fundamental equities at Robeco, said on Wednesday in the immediate aftermath of the vote. Others are similarly urging patience and caution.

But, clearly, not everyone.

As quickly as the blue wave trade crashed, a new narrative built up: that a Democratic president, and split Congress, was somehow the ideal outcome, a “cross-asset sweet spot”, in the words of Dutch bank ING.

US stocks in particular rocketed on Wednesday. The Nasdaq 100 gained 4.4 per cent — its biggest rally since April. The broader S&P 500, meanwhile, added 2 per cent in the biggest-ever first-day gain after a presidential vote. Stocks continued to sweep higher on Thursday.

Not so long ago, the mantra was that a split or contested result would be a dire outcome for markets. 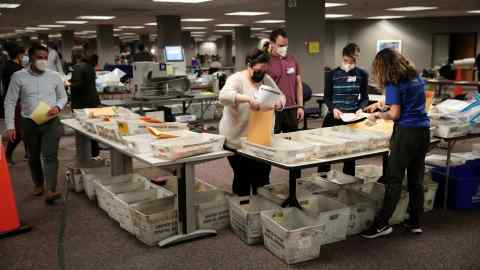 Now Mr Trump is following through on his threats to contest the result, even before it is finalised, and a divided presidency and Senate appears likely. But the new hastily assembled narrative is that divided governments are less intrusive, less willing to unleash tax rises and regulation on corporate America and yet, in the event that Mr Biden does prevail, still keen to proceed with fiscal support. Assuming the outlook on coronavirus improves, this should deliver a boost to stock markets that have already rallied hard since March.

This seems a risky bet, riskier perhaps than the reflation trade. In the teeth of a pandemic that requires an urgent government response to support the economy, deadlock may be overrated.

In addition, if Mr Trump is on his way out of the White House, which cannot be taken for granted, he will still retain the ability to trip up stock markets in his final weeks in office. “There is uncertainty over what policies US president Trump may pursue before the inauguration,” noted Paul Donovan, chief economist at UBS Global Wealth Management. “Trade policy falls under commander-in-chief powers and is an obvious focus.”

Despite their well-founded reputation for election-night slip-ups, investors broadly navigated the US vote night well. It is odd that so many are leaping to benign conclusions now.