Why I Traded Ventas For 8.7%-Yielding Omega Healthcare (NYSE:OHI)

I’m generally a buy-and-hold type investor, but I do, on occasion, sell my holdings when I see a dislocation in the risk vs. reward, especially when compared to another stock in which I see a favorable risk/reward. This is the case that I found with Ventas (VTR), which I had held for a number of years. In this article, I explain why I sold Ventas and used the proceeds to add to my position in Omega Healthcare Investors (OHI). So, let’s get started.

Ventas Is A Troubled REIT

Ventas is a large and diversified healthcare REIT that has seen its fair share of challenges, even before the pandemic set in. To be fair, Ventas does own some high-quality properties, especially in its medical office building sector, which represents 30% of its annual NOI, and 99% of its MOB tenants paid their contractual rent during Q2. In addition, Ventas’ healthcare NNN (triple-net) tenants have continued to pay their rents, with the company collecting 100% of July and August rents from this segment. 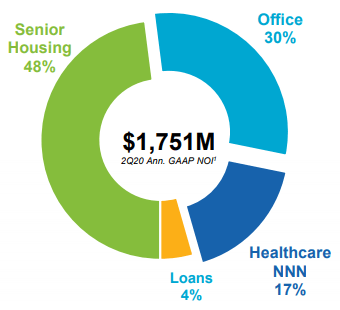 However, seniors housing represents a large part of the portfolio and has seen a number of challenges. The most at-risk is the seniors housing operating portfolio (SHOP), which represented 27% of Ventas’ Q2 NOI and reported an average occupancy of 82.2% in Q2 (compared to 32% of NOI and 87.6% occupancy in Q4’19).

It appears that this segment has seen further deterioration into Q3. As seen below, July occupancy for SHOP has further trended down by 210 basis points to 80.1%. I expect to see continued weakness for this sector through the rest of the year, as COVID-19 infections are expected to rise in the fall and winter seasons.

This has had an outsized effect on Ventas’ operating performance, since SHOP represents such a large part of the portfolio NOI. As such, I wanted to assess Ventas’ profitability, and put together the following operating margin % graph. This was calculated by taking Operating Income (adding back depreciation) divided by Revenue. As seen below, due to Ventas being responsible for the operating expense side of the SHOP segment, weakness in this portfolio has had an outsized impact on operating margin %.

(Created by author based on company financials)

What’s also troubling is that op margin % has actually declined since 2017, as it is partly reflected by the oversupply and occupancy issues that have been an overhang for the seniors housing sector in recent years.

Omega Is A Better Option

This brings me to Omega Healthcare, which is the largest owner of skilled nursing facilities (SNF) in the U.S. and leases its properties on a triple-net lease basis. As such, it does not have the same level of operating expense considerations that Ventas has on its large SHOP portfolio. As seen below, with the exception of a hiccup in 2017, the operating margin % has remained in the high 80%’s to low 90%’s.

(Created by author based on company financials)

This low-cost operating structure helps to protect Omega from rent collection issues if and when they arise, and I see this as being a key advantage over Ventas, which has a much higher cost operating structure. Plus, Omega does not appear to have rent collection issues so far, as it reported a 99% rent collection rate during Q2 and July. Looking forward to Q3, I expect Omega’s tenant profitability to remain more or less in line with Q2 levels, as it reported that July average facility occupancy (83%) was materially in line with that of June.

To be fair, the REIT has a unique set of risks in that its tenants are reliant on government reimbursements through the Medicare and Medicaid programs. This is viewed by some as being a double-edged sword for Omega. Its tenants will likely need additional support from the government to deal with the pandemic.

However, I don’t see this as being a negative, as government pay is more predictable than private pay during times like this, and I don’t see the federal government as hanging the SNF industry, and thereby senior citizens, out to dry in the middle of a pandemic.

Plus, management has put in place risk-mitigating factors, such as master leases and security deposits, to protect itself in the event of tenant difficulties, and in the past, has proven to be adept at replacing troubled operators.

In the meantime, its 959 properties are well-diversified across 69 operators in 41 U.S. states and the United Kingdom, and tenant EBITDARM and EBITDAR coverage remains strong at 1.68x and 1.32x, respectively. In addition, Omega does not have the same oversupply issues as Ventas. That’s because 86% of states have a moratorium on new SNF beds or CON (certificate of need) restrictions. Plus, based on management’s estimates below, aging demographics will drive SNF occupancy beyond current capacity by 2025. 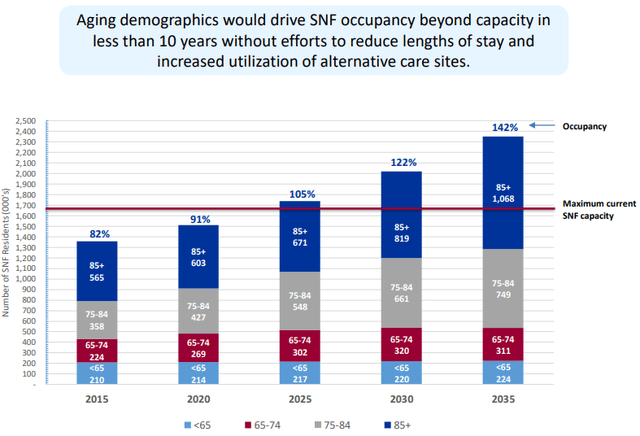 At the same time, SNFs remain as the lowest-cost setting for patient rehabilitation, which helps to ensure a steady flow of hospital discharges to Omega’s properties. As seen below, average cost per day in an SNF setting is 68% lower than that of the next lowest post-acute care facility type. 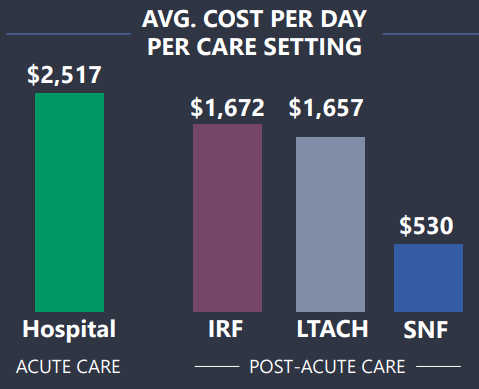 The combination of low valuation, high dividend yield, and overall steady business model (albeit with operator difficulties here and there) have translated into Omega’s outperformance over Ventas in the past decade. As seen below, with dividend reinvestment, Omega’s performance has thumped that of Ventas, with an 11.9% CAGR, compared to the 4.7% CAGR of Ventas over the past decade. 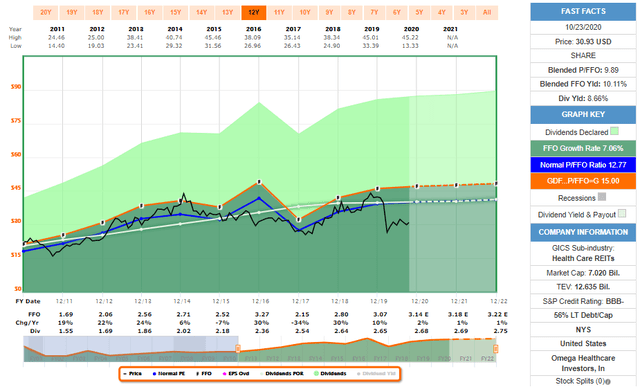 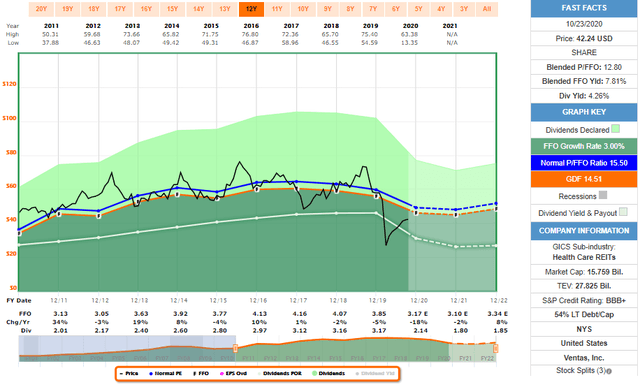 This current pandemic has proven to be the “straw that broke the camel’s back” for Ventas, especially when it came to having to cut its dividend. While there’s no doubt in my mind that the company will survive this crisis, I see it as having a challenging road back towards recovery, especially considering the near-term challenges to its SHOP portfolio due to the pandemic and the long-term challenges due to seniors housing oversupply.

While Omega also has challenges of its own, I see it as being in a far better position than Ventas, due to its mission-critical properties and their low cost of care. In addition, Omega doesn’t have the same oversupply issues that Ventas is facing. Lastly, its triple-net leases and government-funded tenants have proven to be a positive differentiator during these troubled times.

For these reasons, and considering the current valuation gap, I see the risk-reward ratio tilting in favor of Omega. As such, I sold all of my Ventas shares, and used the proceeds to add to my existing position in Omega Healthcare. While this may not be the right move for everyone, this is what made sense for me. In essence, I got more exposure to another healthcare REIT, which is the space I wanted to stay in, with a strong total return track record, a lower valuation, and a higher dividend yield.

Disclosure: I am/we are long OHI. I wrote this article myself, and it expresses my own opinions. I am not receiving compensation for it (other than from Seeking Alpha). I have no business relationship with any company whose stock is mentioned in this article.