Home Financial news Why Huawei Continues To Gain In The Telecom Equipment Market Despite Opposition
2020-09-262020-09-26By finanz.dk

It’s no secret that the U.S. government is trying to persuade everyone not to turn to Huawei as their supplier of telecom equipment. Based on this, some have decided to go long companies that compete against Huawei. Ericsson (ERIC) and Nokia (NOK) are two examples of this. Yet Huawei continues to increase its market share despite efforts to the contrary. How this is possible will be covered next.

Huawei and the U.S. government

Huawei is a supplier of telecom equipment. For a number of reasons, the U.S. has been trying to reduce Huawei’s market position. Some U.S. officials have personally tried to convince relevant authorities to stop using Huawei, which shows how important the issue is to the U.S. While some have agreed to do so, not all have done the same.

In theory, Huawei losing contracts at the urging of the U.S. government should bode well for the competition. Assuming they are able to execute, a number of companies stand to benefit by winning contracts that would otherwise have gone to Huawei. The list of companies include Ericsson, Nokia, Cisco (CSCO), Ciena (CIEN) and Samsung (OTC:SSNLF).

These companies are the main suppliers of telecom gear together with Huawei and ZTE, both from China. Note that the telecom equipment market encompasses a number of verticals. For instance, there’s broadband access, optical transport, routers and Ethernet switches for service providers, core and radio access network. Not all of the aforementioned companies compete in every segment.

Huawei vs. the competition

In contrast, Ericsson and Nokia have seen their share fall during this time frame. Nokia has shrunk by a third to about 14-15% and Ericsson has lost about three percentage points to roughly 14%. Excluding Huawei, ZTE is the only other company to have made substantial gains. ZTE managed to increase its share from 9% to 11%. At the other end of the spectrum is Cisco, which has seen its share decrease to 6%. The remaining companies are about flat in the low single digits. 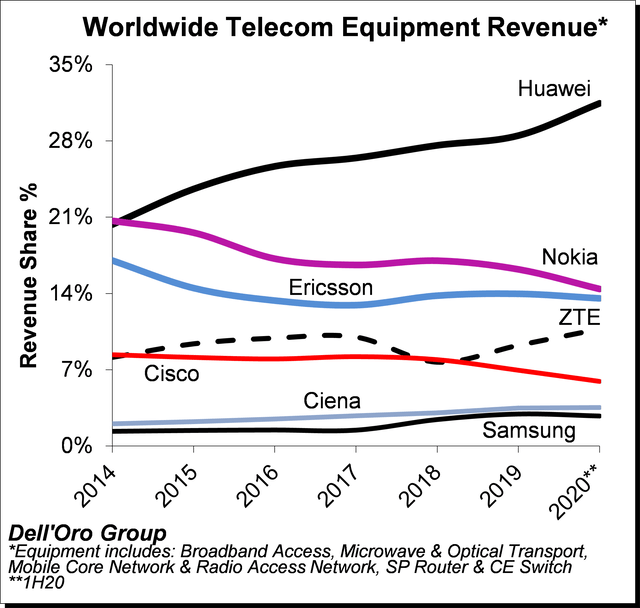 Why U.S. sanctions have not been as effective against Huawei as first thought

The divergence between Huawei, Ericsson and Nokia especially is quite striking. The three used to compete almost head to head at one time, but Huawei has now clearly separated itself from the rest of the pack. Huawei is now bigger than Ericsson and Nokia combined. What’s even more remarkable is that Huawei has been able to do this against a backdrop of determined U.S. opposition, which includes U.S. government sanctions. For instance, the U.S. government put Huawei on its Entity List in May 2019, which restricts its ability to do business with U.S. companies unless they have permission from the government.

This turn of events might come as a surprise to those who have been betting on Huawei’s competitors, based on the belief that Huawei would cede ground due to U.S. pressure. A number of people base their bullish thesis for companies like Ericsson and Nokia on the assumption that Huawei is in dire straits. But there are good reasons why Huawei has shown to be more resilient than many anticipated.

One of the reasons has to do with Huawei’s status as the leading supplier of telecommunications equipment in China. China’s market is big and that makes a difference. Take equipment for radio access networks or RAN for instance. According to Ericsson’s CEO, “China today has 60% of the number of base stations in 4G of the total world market.” So by virtue of being number one in a market as big as China, Huawei is able to occupy a major share of the global market. Huawei can use China’s size to climb up the ranks, even if its ability to do business in other countries is interrupted.

Furthermore, China has been spending heavily on upgrading its telecommunications infrastructure for 5G. According to local reports, the country is looking to have over 600,000 5G base stations by the end of 2020, almost five times the number last year. The scale of infrastructure investment has given companies like Huawei an advantage because it’s getting the lion’s share of contracts. It also explains why ZTE has also done well in recent times.

A third factor is that China has seen less disruptions due to the COVID-19 pandemic compared to many other countries. In other places, a weakening economy and delays in infrastructure spending have affected companies and caused revenue to be less than expected. For instance, the 5G rollout in some countries has been postponed until the pandemic is under control. All of these factors have played a role in determining the global rankings of equipment suppliers.

However, there is one factor out there that could turn the tide against Huawei in favor of competitors like Ericsson and Nokia. The U.S. government has passed new regulations that require foundries using U.S. semiconductor manufacturing equipment to apply for a license if they wish to do business with Huawei. As a result, foundries like TSMC (TSM) have stopped working with Huawei. Many other suppliers of semiconductor chips have done the same.

On paper, Huawei’s ability to execute contracts could be disrupted by a shortage of semiconductor chips. If Huawei is unable to fulfill orders, competitors could be called to replace Huawei. Competitors would gain at the expense of Huawei. It’s possible suppliers like Ericsson and Nokia could gain market share simply because telecoms have no other choice than to replace Huawei.

However, Huawei has a large inventory of semiconductor chips, which means Huawei’s production of telecom gear is unlikely to be impacted in the short term. Telecom equipment typically uses chips with a relatively long life cycle, which don’t necessarily require leading-edge processes. In other industries, the need for the latest processes is much greater.

As a consequence, inventory can be bigger without becoming obsolescent and last longer. As long as there’s inventory, Huawei is not likely to slow down and give the competition a chance to catch up. Huawei should be able to maintain market share while this remains the case. Competitors may have to wait quite some time for any impact to become apparent depending on how much inventory there is, assuming there is any. 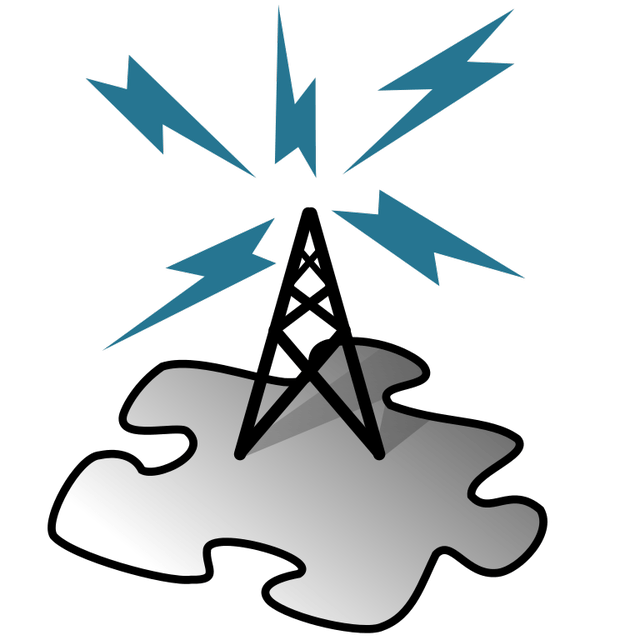 The U.S. government has been waging a determined campaign against Huawei. Some people have concluded that it makes sense to bet on Huawei’s competitors with this in mind. The belief is that a number of companies stand to gain from Huawei’s misfortune. Among the companies that come to mind are Nokia and Ericsson, the two primary competitors of Huawei in the telecom equipment market.

But the U.S. government has yet to achieve the desired results, even though it has been over 16 months since the first sanctions were imposed. Huawei continues to build on its lead as the number one provider of telecommunications equipment. There are several factors that have made this possible and competitors will have to overcome them if they intend to displace Huawei from its position.

Nevertheless, some people are convinced that betting on Huawei’s competition is the way to go. The latest round of U.S. sanctions against Huawei has only strengthened this conviction. But while the U.S. government may succeed this time around, it’s also possible that it may not. If last year’s sanctions did not have the desired impact judging by Dell’Oro’s statistics, then the same could happen this time around. It’s not out of the question that China succeeds in what it intends to do, which is to build chip production lines without using U.S. equipment. Such a turn of events would let the air out of U.S. sanctions and greatly undermine the bull thesis for Huawei’s competitors.

Still, betting on Huawei’s competitors gaining market share at Huawei’s expense has become fairly popular. The bull thesis for these companies rests more and more on the assumption that Huawei will be unable to continue and do business the way it is accustomed to doing. To be more exact, the inability to secure parts and components for its products is believed to be the knockout blow against Huawei.

But even if Huawei is eventually eliminated, it’s unlikely to happen in the short term due to, for instance, inventories. It’s possible Huawei has enough inventory to hold out for a couple of years. People betting on Nokia and Ericsson may have to wait that long to see any payoff, assuming there is any. China is another wildcard that could affect what happens to Huawei. Going long companies like Nokia and Ericsson may not turn out to be such a great move as some suggest.

Bottom line, a number of people have based their bullish thesis on the assumption that Huawei will be hard-pressed to compete with the U.S. firmly against it. Some even see going long the likes of Nokia and Ericsson as a no-brainer given the circumstances. However, a closer look suggests otherwise. At the very least, it’s not as clear-cut as it seems.