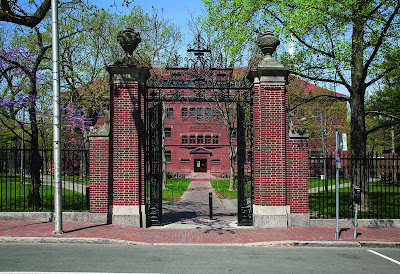 
A new profile of Berkeley economists Emmanuel Saez and Gabriel Zucman in the New York Times contained a fascinating revelation about the ongoing academic reception of their work. Late last year, Zucman was being courted for a faculty appointment by Harvard University’s Kennedy School of Government. Although the department voted to approve the hire, Harvard’s president and provost vetoed the decision. According to the Times, this was “partly over fears that Mr. Zucman’s research could not support the arguments he was making in the political arena.”
A predictable assortment of critics seized upon this comment to charge Harvard with political bias. Vice cobbled together a column charging the institution with politically motivated hypocrisy. “Harvard’s president intervened to deny tenure to a rising-star economist because he publicly supports a wealth tax,” wrote J.W. Mason, a left-leaning economics professor at John Jay College. The Urban Institute’s Daniel Kuehn called the decision “outrageous” and suggested Harvard’s administration intruded on faculty hiring decisions. And Marshall Steinbaum suggested the incident revealed conspiratorial designs by the “economics establishment” to tell “the wealthy what they want to hear” and to suppress researchers who politically threaten their fortunes.
Zucman for his own part suggested a similar political motive was at play, telling reporter Jim Tankersley that his rejection from Harvard “should not discourage young scholars in the US to publicly defend new ideas.”

Such claims fit with a growing tendency to depict Saez and Zucman as anti-establishment outsiders and victims of viewpoint discrimination against their work. Warren Gunnels, an economic adviser to the Bernie Sanders campaign, suggested as much to the Times, arguing that economists “that disagree with Saez and Zucman…are funded by the powers that be, the establishment, the billionaire class.” Zucman has personally encouraged and cultivated a similar narrative on his Twitter feed, even though the evidence speaks to a very different reality.

As tenured professors making six-figure salaries at an elite department, the pair of UC Berkeley economists head an “inequality studies” research center with a multi-million dollar budget. The center was started with a gift from a left-leaning billionaire insurance executive. Far from beleaguered outsiders, Saez and Zucman are the epitome of academia’s privileged “one percent.”

As to the matter of their disputed statistics, a much simpler explanation than viewpoint discrimination lies at the heart of the matter. Rather, the vetoing of Zucman’s hire by Harvard represented a rare display of academic integrity in a politicized academy that all too often elevates and celebrates subpar research on account of ideological agreement with its message.

The issue with Zucman’s work revolves around a stunning statistical claim that he made last fall. According to his own proprietary calculations, the overall effective tax rate paid by the ultra-rich in the United States had dipped below that paid by the bottom 50 percent of earners for the first time in 2018.

Zucman released these statistics to journalists with much fanfare, where they were quickly trumpeted as “fact” by outlets including the New York Times and Washington Post to bolster Elizabeth Warren’s wealth-tax proposal. In reality, Zucman’s numbers had not even undergone scholarly peer review, as is the norm for work in the economic arena.

The weeks that followed their release also revealed something far worse than failing to adequately vet this seemingly stunning empirical claim.

Instead of objectively reporting the latest findings from tax statistics, Zucman was placing his finger on the scale. He appeared to be bending his results to conform to the political narrative of Warren’s campaign, which he was also advising at the time. Through a series of highly opaque and empirically suspect adjustments, Zucman had artificially inflated the tax rate paid by the poorest earners while simultaneously suppressing the tax rate paid by the rich.

I was among the first economists to notice and call attention to the problems with Zucman’s new numbers. Shortly after his release to the New York Times, I noticed a strange discrepancy. The tax-rate estimates he provided for the ultra-rich – the top 0.001 percent of earners – did not match his own previously published academic work on the subject, including a 2018 article in the highly ranked Quarterly Journal of Economics.

Whereas Zucman now claimed to show the ultra-wealthy paid just slightly north of 20 percent of their earnings in taxes, the most recently available year of his previously published numbers (2014) places the rate at 41 percent. I called attention to this discrepancy with a tweet, as did Columbia’s Wojtek Kopczuk and the University of Central Arkansas’s Jeremy Horpedahl. Then the floodgates of scrutiny opened. 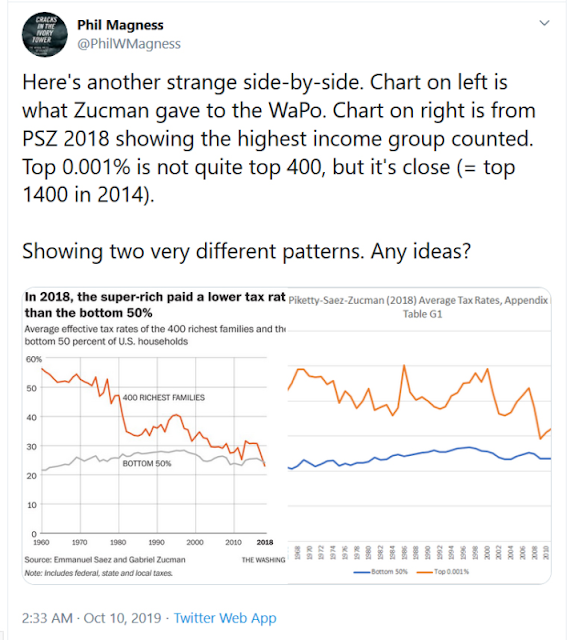 At the bottom of the income ladder, he was artificially raising the depicted rate faced by the poorest earners. He did so by excluding federal tax programs that are intentionally designed to alleviate the tax burden on the poor, such as the Earned Income Tax Credit and the Child Tax Credit. By leaving out these programs, Zucman not only broke from decades of statistical conventions – he also created the illusion that the tax rate paid by the bottom quintile was nearly twice its actual level.

Later investigation revealed that Zucman further tilted the scales through unconventional assumptions about the burdens of state and local consumption taxes on the poor. To avoid the empirical impossibility of infinite sales-tax rates that arise from accounting discrepancies between pre- and post-transfer income, Zucman essentially excluded the bottom decile of earners when assigning its tax incidence. This essentially causes him to misrepresent data from the second decile from the bottom as the poorest earners.

Zucman’s handling of the very top of the distribution ventured even more aggressively into the territory of intentional data manipulation. The biggest discrepancy here came from his handling of how to assign corporate tax incidence across earnings. When economists examine corporate tax incidence, they usually distribute it across a variety of affected parties according to fairly standard assumptions about the portion that falls onto shareholders, onto other forms of capital, and onto the noncorporate sector of the economy due to various pass-through effects.

Indeed, Zucman followed these conventional assumptions in his aforementioned academic article from 2018, coauthored with Saez and Thomas Piketty. In his new statistics, however, he jettisoned all conventional literature on corporate tax incidence and adopted his own heterodox approach that effectively assigns 100 percent of actual incidence to its statutory incidence, namely shareholders.

This unconventional assumption not only conflicts with his prior work, but is sufficiently unrealistic to have caused a wave of jeers around the economics profession when it was discovered. In practical effect, however, it greatly augmented Zucman’s depicted tax rate on the top 0.001 percent in the mid-20th century and greatly reduced the same in the last few decades, mapping with the recent downward trend in corporate tax rates.
Again, the overall effect of Zucman’s fuzzy math is to severely understate the total effective tax rate on the rich compared to other estimates. Those estimates, like Zucman’s earlier academic work, place that rate at almost twice the level he now claims.

To cap off his data-bending exercise, Zucman undertook a final suspicious step. He claimed to report tax rates for both groups in 2018, citing this as the first time in history that the rich paid a lower rate than the poor. Except there’s one glaring problem: at the time Zucman released his headline-grabbing new stats to the press, the IRS had not yet published any statistical reports from its 2018 returns (these only become available in the early spring of 2020). Closer examination revealed that Zucman simply imputed his “new” numbers from 2016 stats based on his own highly imprecise assumptions about the effects of the 2017 Trump tax cut. While these figures are sure to be scrutinized when the actual numbers come out, suffice it to say that Zucman was presenting estimates for years where he does not actually possess data and, furthermore, staking one of the most audacious claims of his argument on the same.

Within a few weeks of the earliest scrutiny of Zucman’s statistics, the wheels began to fall off of his narrative.

The skepticism even extended to economists on the center-left who are more sympathetic to progressive tax hikes than I am. In late October former Treasury Secretary Larry Summers debated Zucman’s coauthor Emmanuel Saez in a public forum about wealth taxation. Summers indicated he had conducted a “very close study of the Twitter wars … surrounding the work of Saez and Zucman” and described himself as “about 98.5% persuaded by their critics that the data are substantially inaccurate.”
Some four months later Zucman still retains a credulous following among journalists and political candidates, but he has struggled to find support from economists who work in the area of taxation and inequality.

There’s a good reason that most of the profession has looked on his most recent work with a skeptical eye. It is the product of political advocacy, open electioneering on behalf of Warren, and statistics that were constructed primarily to fit with the narratives of her campaign. In bending his data and eschewing the process of peer review, Zucman shed any pretense of doing social science – including his own previously published work where it contradicted his new political narrative.

Harvard’s administration, to its credit, recognized this inappropriate breach of scholarly standards and exercised a rare but necessary check upon their ongoing erosion in the academy. Naturally, that has left other activist academics and journalists who support his claims for political rather than scientific reasons in a fit of rage.

Phil Magness is a Senior Research Fellow at the American Institute for Economic Research.