The director-general of the World Health Organisation has dismissed allegations that he is “taking sides” in the war in his native Ethiopia as untrue.

Ethiopia’s army chief has accused Tedros Adhanom Ghebreyesus, an ethnic Tigrayan and arguably one of the world’s best-known Ethiopians, of attempting to secure weapons and backing for leaders of the restive Tigray region.

Over the past two weeks, the national government in Addis Ababa has been engaged in a military offensive against the northern region, which is led by the Tigray People’s Liberation Front, or TPLF, and it says it is closing in on the capital, Mekelle.

“He has been doing everything to get them support. He’s helped them to get weaponry,” General Birhanu Jula said in a televised address referring to Mr Tedros, without offering evidence to support his claims.

“He tried to lobby people by using his international profile and mission to get support for the TPLF junta. He did that because he is one of their members, and he is himself a criminal,” Gen Birhanu added, before raising questions over why Mr Tedros is still heading the WHO. “This is a question to be answered by the government, not us [the military],” he said.

In a statement given to the Financial Times, Mr Tedros said: “There have been reports suggesting I am taking sides in this situation. This is not true and I want to say that I am on only one side and that is the side of peace.”

The allegations add to rights groups’ concerns that in a country prone to ethnic nationalism Tigrayans may be singled out for abuse.

Mr Tedros was his country’s health and foreign minister between 2005 and 2016 when the TPLF was the dominant force in a national four-party coalition known as the Ethiopian People’s Revolutionary Democratic Front.

Resentment grew against Tigrayans, who make up just 6 per cent of the population of a country of over 110m people and almost 80 ethnic groups. Following the appointment of Abiy Ahmed as prime minister in 2018, the TPLF refused to join a national party coalition and Tigrayans, who had been in power for almost three decades, were sidelined.

Simmering tensions escalated into armed conflict this month after an attack by the TPLF on a federal military base in Tigray. The prime minister, who has called the TPLF a “belligerent” and “criminal clique”, sent troops to the region.

Concerns over the spread of ethnic violence are mounting. Earlier this month witnesses blamed forces loyal to the TPLF for a massacre of people of Amhara ethnicity, according to Amnesty International.

Human Rights Watch has warned that rhetoric against the TPLF was taking on a potentially dangerous anti-Tigrayan tinge as it had “received credible reports that Tigrayan residents elsewhere in the country have been suspended from their jobs and prevented from flying externally”. 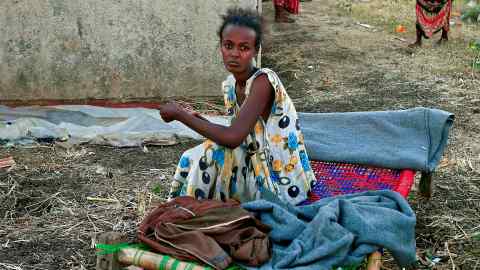 The Ethiopian Human Rights Commission expressed its own concern at “people facing discriminatory and exclusionary processes on account of their Tigrayan ethnicity”, warning on the dangers of “ethnic profiling”.

The office of the prime minister countered in a statement on Wednesday that it “denounces, in the strongest of terms, mischaracterisations” that its operation against the TPLF “has an ethnic or other bias”. Billene Seyoum, Mr Abiy’s spokeswoman, tweeted this week that: “Denouncing TPLF for its criminality should not be assumed as a call to intimidate innocent Tegaru [Tigrayan] brothers and sisters. TPLF does not equal Tegaru.”

Redwan Hussein, spokesman for the State of Emergency Task Force for the Tigray Crisis, said on Thursday that his government is “not happy” with Mr Tedros’s position.

Mr Redwan also said that on Thursday Ethiopian “defence forces are moving forward and closing in” on the Tigray region’s capital, Mekelle. As fighting rages on, some 4,000 refugees a day are crossing into neighbouring Sudan, according to the UN.

Anthony Blinken, the longstanding foreign policy adviser of US president-elect Joe Biden, tweeted on Thursday that he was “deeply concerned about the humanitarian crisis in Ethiopia, reports of targeted ethnic violence”.

Previous PostFight Club: A Dystopia We Can Learn From?Next PostOil Prices Fail To Rally Despite A Flurry Of Bullish News