The World Health Organization has said anti-inflammatory steroids should be used to treat severely ill coronavirus patients as a landmark study provided a “clear signal” of their effectiveness in reducing mortality.

Issuing its first guidance on treating Covid-19, the WHO strongly endorsed the use of two cheap steroids, informed by a report published on Wednesday which confirmed that the drugs significantly reduced the rate of death in patients requiring oxygen support.

The WHO-led report reinforced the conclusions of an Oxford university study this summer showing that the drug dexamethasone, which is part of the same family, cut mortality rates in severe Covid-19 patients. To date, these are the only treatments with a proven effect on coronavirus death rates.

Using widely available steroids that can be easily administered would save roughly one life for every 10 patients treated, according to Wednesday’s meta-analysis of seven global randomised controlled trials, which included the Oxford university Recovery trial.

While the UK academics reported strong results with dexamethasone, the WHO-led analysis found that another everyday steroid, hydrocortisone, was equally successful. Hydrocortisone is used to treat allergies, asthma and inflammatory conditions.

Steroids are already being used to treat Covid-19 patients and are believed to have saved thousands of lives during the pandemic. The WHO does not recommend using steroids in non-severe coronavirus patients, a group that the drugs might harm.

The WHO-led study found that corticosteroid treatment reduced mortality in critically ill patients from 40 per cent to 32 per cent. 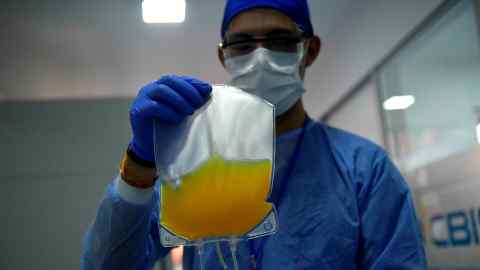 Martin Landray, professor of medicine and epidemiology at the University of Oxford and lead researcher on the Recovery trial, explained that what appeared to make most Covid-19 patients severely ill and die was that their immune system went into “overdrive”, and that steroids helped pare back this exaggerated immune response.

“We understand now that it’s a class [of drugs] effect, there’s more than one choice,” said Prof Gordon. “Doctors should use the drugs they are most familiar with, and it’s good news that we have choices.”

Prof Landray said: “These drugs have been around for decades, every medical student should learn about them as soon as they open a clinical pharmacology textbook.”

Treating 12 people with dexamethasone would cost roughly £60, he said, adding that “there’s not much you can do in [an] ICU unit that costs less than £60”.

He said prescribing patterns in the US show that the administration of dexamethasone had increased fivefold since the results of the trial were made public in June. Reports of dexamethasone shortages emerged in the summer, but supply has since bounced back to normal.

A decision was made to pool the results of other ongoing studies into corticosteroids into a meta-analysis after Oxford university released its report into dexamethasone in June.

Professor Jonathan Van-Tam, deputy chief medical officer for the UK, said the studies “show the important work that has been done here in the UK by researchers in making further major contributions towards the international evidence”.

“Research such as this will make the difference in controlling this virus,” he added.

Prof Landray said they wanted to ensure that the Recovery trial was not a one-off and could be reproduced, adding that the results across the seven randomised trials showed “remarkably consistent” results.