Who Bought the $3.3 Trillion Piled on the Incredibly Spiking US National Debt Since March?

Trillions flying by so fast, it’s hard to even count them. But somebody had to buy these Treasury securities. And it wasn’t just the Fed.

In the 12 months through February, before the Pandemic started – those were the Good Times when a government shouldn’t have to borrow heavily – the US government added a breath-taking $1.4 trillion to its already huge pile of debt. And then came the Pandemic and the bailouts and the stimulus payments and all the other stuff, and over the six months since then, the US government added another $3.3 trillion to the Incredibly Spiking US Gross National Debt that now amount to $26.8 trillion: 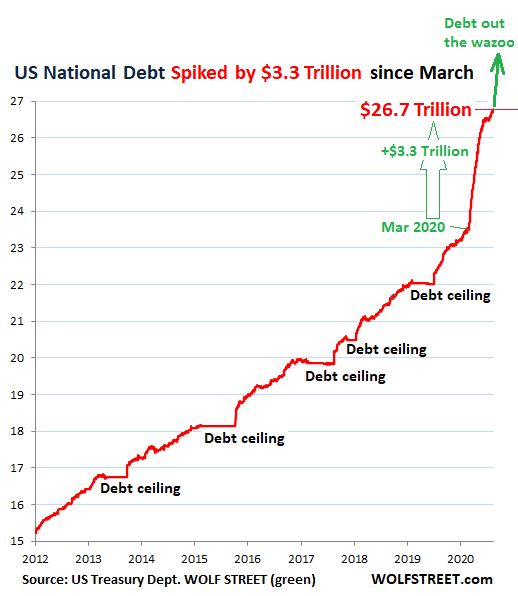 Foreign investors all combined – central banks, government entities, companies, commercial banks, bond funds, other funds, and individuals – added $287 billion to their holdings in July compared to July last year, including $48 billion during the month of July. This brought their holdings to a record of $7.087 trillion (blue line, right scale in the chart below).

But due to the incredibly spiking US Treasury debt ($26.5 trillion on July 31), their share of this debt (red line, right scale), after plunging in June to the lowest since 2008, only held steady in July, at 26.7%: 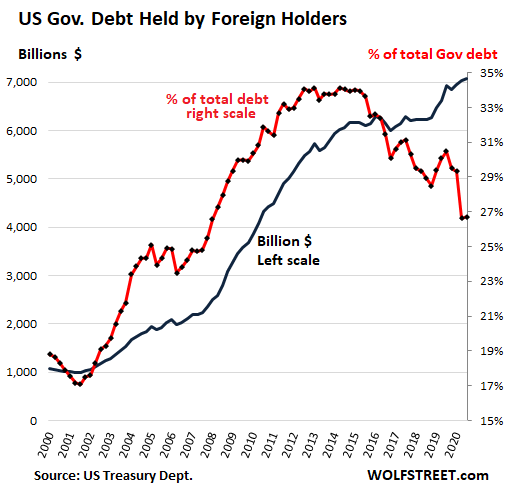 America’s biggest foreign creditors, Japan and China: Japan increased its holdings in July by $32 billion, to a total of $1.29 trillion. Over the 12 months, its holdings increased by $162 billion.

China whittled down its holdings further in July. Over the 12-month period, its holdings fell by $37 billion, to $1.07 trillion, following the trend (green line) since 2015, with exception of the plunge and recovery around its capital-flight phase.

Combined, Japan and China held 8.9% of the Incredibly Spiking US debt, the second-lowest share in many years, with the lowest having been in June (8.8%): 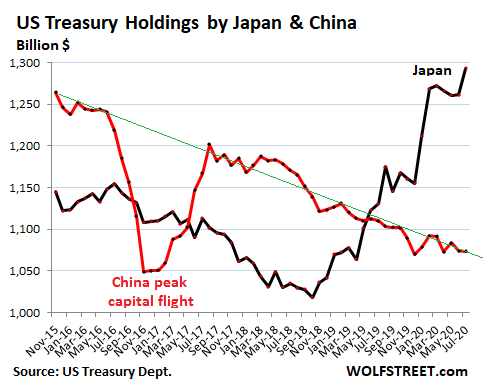 The next 10 largest foreign holders (in parenthesis their holdings as of July 2019):

This list is studded with tax havens and financial centers, including those where US corporations have mailbox entities that hold assets in an effort to dodge US taxes. So some of these “foreign” holders are US entities, such as Apple, with accounts registered in their mailbox operations there.

Missing from this list are Germany and Mexico, which hold only $78 billion and $48 billion respectively in Treasuries, despite their mega-trade surpluses they have with the US.

The Social Security Trust Fund, pension funds for federal civilian employees, pension funds for the US military, and other government funds shed $15 billion in July and $21 billion over the 12-month period, which whittled down their holdings $5.89 trillion (blue line, left scale), amounting to 22.2% of total US debt (red line, right scale).

READ ALSO  A Sordid Conspiracy To Deceive The American Electorate

Even though the Treasury holdings of these government pension funds have tripled over the past 20 years, their share, given the Incredibly Spiking US National Debt, has dropped from over 45% in 2008 to 22.2% in July: 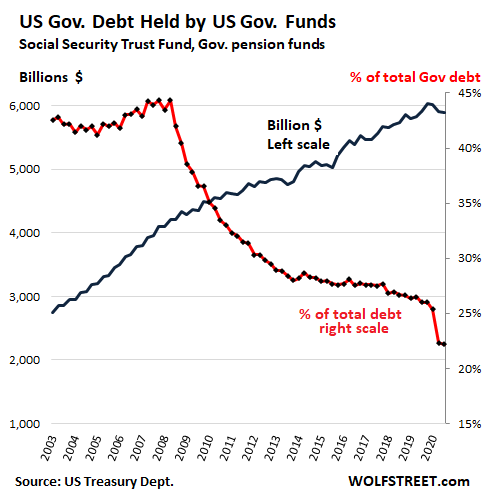 In July, the Fed added $89 billion to its Treasury holdings, bringing its total holdings at the end of July to $4.29 trillion (blue line, left scale), amounting to a record of 16.2% of the Incredibly Spiking US National Debt (red line, right scale) – that’s the portion of the US debt that is has monetized. Over the 12-month period through July, the Fed added $2.18 trillion in Treasuries to its holdings, most of it since March, doubling its pile: 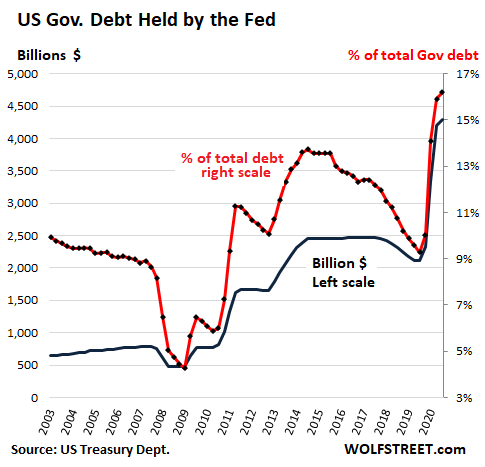 US commercial banks added $66 billion in Treasury securities to their holdings in July, and $228 billion over the 12-month period, to a total of $1.14 trillion, according to the Federal Reserve’s data release on bank balance sheets, amounting to 4.3% of the total US debt. 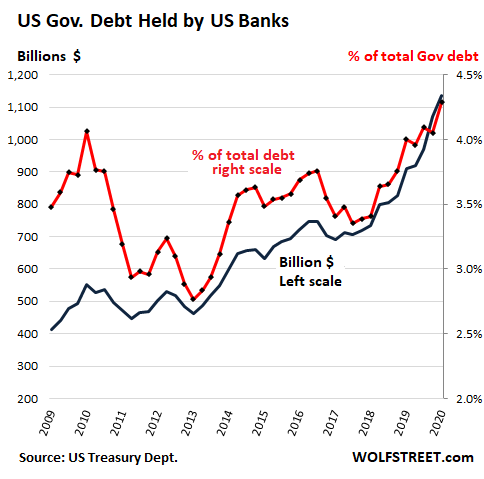 Other US entities & individuals

Above, we covered all foreign investors, plus US government funds, the Fed, and US banks. What’s left are other US investors – both individuals and institutions such as US bond funds, US pension funds, US insurers, cash-rich US corporations, private equity firms to park cash, hedge funds to use them in complex trades, etc.

During the market tumult, they all piled into Treasury securities, some possibly in panic, others to engage in or get out of risky trades, adding $1.8 trillion over the three-month period through June. But in July, they shed $93 billion, bringing the holdings down to $8.1 trillion (blue line, left scale), amounting to 30.6% of total US debt (red line right scale). The surge in holdings was followed by the spike in the US debt, and the percentage that these investors held in July (30.6%) was roughly level with their share at the end of the year (30.5%): 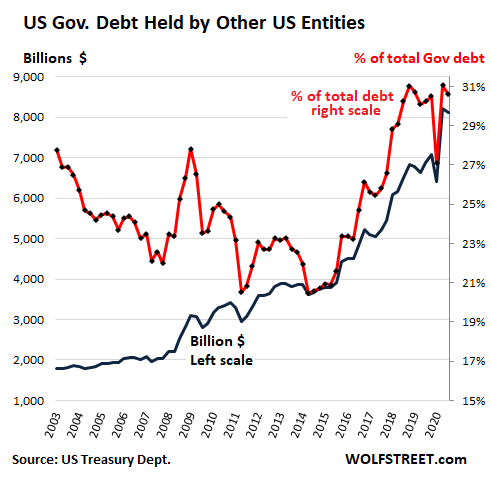 The chart below shows Treasury holdings by category of holder combined into one chart, with the US debt piled up in all its majesty: 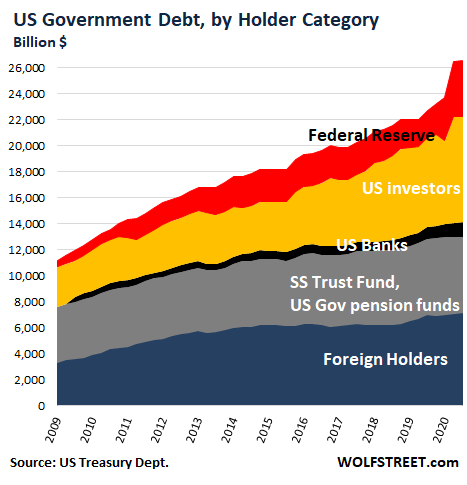