WHO advises against prescribing remdesivir to Covid patients

Home Financial news WHO advises against prescribing remdesivir to Covid patients
2020-11-202020-11-20By finanz.dk

The World Health Organization has recommended that doctors do not prescribe Gilead’s remdesivir to patients in hospital with coronavirus, dealing another blow to the only antiviral approved to treat the disease.

Remdesivir was approved by the US Food and Drug Administration (FDA) last month. But a landmark WHO study has cast doubt on its effectiveness.

“The antiviral drug remdesivir is not suggested for patients admitted to hospital with Covid-19, regardless of how severely ill they are, because there is currently no evidence that it improves survival or the need for ventilation,” an expert panel of the WHO wrote in the British Medical Journal on Friday.

It is a so-called living guideline, routinely used in areas where research is fast-moving. Friday’s recommendation is based on four randomised trials involving more than 7,000 patients.

“Remdesivir has no meaningful effect on mortality or on other important outcomes for patients, such as the need for mechanical ventilation or time to clinical improvement,” the WHO said.

The panel noted that the certainty of evidence was low and said it did not prove the drug had no benefit. “Rather, there is no evidence based on currently available data that it does improve important patient outcomes,” it said.

If someone has Covid, what other antiviral option do we have? None right now

But because the drug could potentially cause harm — and given the relatively high cost and difficulty of administering the drug, which can only be given intravenously in hospital — it said it was an appropriate recommendation. It has recommended further studies.

The health body has advised in favour of using steroids to manage severe Covid-19 patients. Steroids are cheap, taken orally, and widely available. Remdesivir costs $2,340 a course, or more.

The WHO is also moving to suspend remdesivir from its prequalification list, a prerequisite for procurement in developing countries, an official told the Financial Times.

Gilead said that remdesivir, now known by its brand name Veklury, was recommended by reputable institutions including the US National Institutes of Health and the Infectious Diseases Society of America. The company said that there was “robust evidence” from multiple studies showing that the drug speeded up recovery.

“We are disappointed the WHO guidelines appear to ignore this evidence at a time when cases are dramatically increasing around the world and doctors are relying on Veklury as the first and only approved antiviral treatment for patients with Covid-19 in approximately 50 countries,” Gilead said.

Gilead and the WHO entered a collision course when the international health body released the largest amount of evidence on the drug to date last month, showing that it had no effect on mortality, hospital stays, or the need for ventilation. Gilead said the study was flawed, but the WHO insisted that its methodology was sound.

Gilead reported remdesivir sales of $873m in the third quarter, missing analyst expectations for about $1bn. The biotech group warned when it announced earnings in October that there was “significant volatility and uncertainty” around remdesivir sales, with hospitals stockpiling the drug at lower rates than it had forecast.

READ ALSO  ‘Boy, did we screw up’: 12 rules for repentance 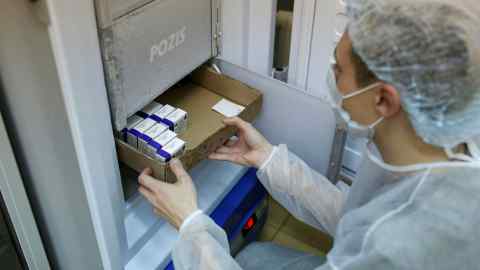 The drugmaker was aware of negative results of the trial when it agreed a deal, worth up to €1bn, to supply the drug to European countries in October. Member states are not under any obligation to pay and the European drug regulator is currently reviewing the available trial data with a view to changing how the drug is used.

Umer Raffat, an analyst at Evercore, said there were “methodology problems” in how the WHO’s trial data were analysed. He puts more weight in the trial run by Anthony Fauci’s group at the US National Institutes of Health, as well as Gilead’s, which were “proper large studies with appropriate randomisation and statistical analyses”.

“Plus, if someone has Covid, what other antiviral option do we have? None right now,” he said.

The WHO disagreed, saying that its trial “provides the vast majority of worldwide information on the impact of remdesivir on mortality and on the need for ventilation”.