Where Have the Paycheck Protection Loans Gone So Far?

The Federal Reserve Bank of New York has put out some interesting data on part of the first round of the Great Money Pump, phase one of the Paycheck Protection Program money giveaway.

The data is somewhat surprising. The figure below suggests that some of the hardest hit areas with COVID-19 infections—such as New York, New Jersey, Michigan, and Pennsylvania—are getting fewer loans than some Mountain and Midwest states on a per-small-business basis. In New York, the epicenter of the coronavirus in the United States, less than 20 percent of small businesses have been approved to receive PPP loans. In contrast, more than 55 percent of small businesses in Nebraska are expecting PPP funding. 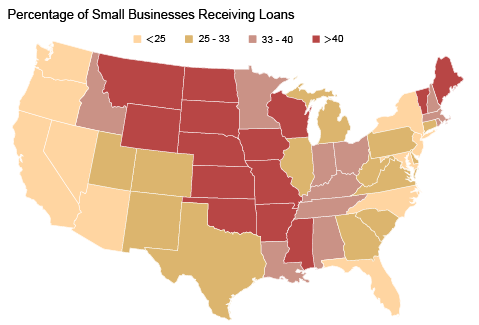 Also curious, the next chart shows that more affected industries, such as Retail Trade and Accommodation and Food Services, are receiving more PPP funding than industries that likely lost less revenues, such as Information, Finance and Insurance, and Educational Services. But, there are notable exceptions in the pattern.

One sector that has received disproportionately more PPP funding is Construction, even though it has been classified as “essential business” in many states, making it conceivably more immune to the social distancing measures enacted to contain COVID-19. Another sector that has possibly been less affected but has received a relatively large share of PPP loans is Professional, Scientific, and Technical Services. Small businesses in this sector are more likely to be able to continue operating online. 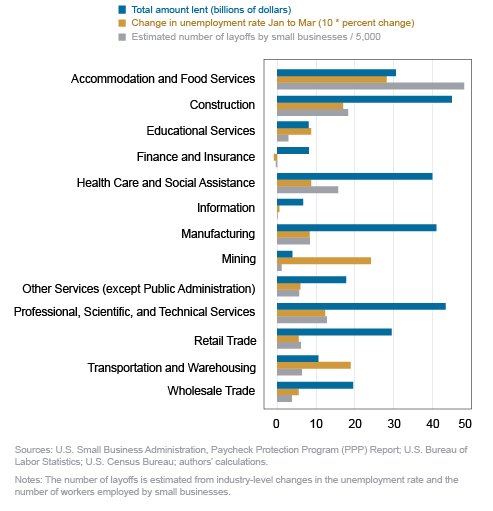 The economic impact of COVID-19, both measured by the number of COVID-19 cases per capita and by the number of initial unemployment claims per capita, does not explain the geographical distribution of PPP loans. In contrast, we find that lenders’ preference for borrowers with an existing relationship and the market share of community banks are the main factors explaining the geographical variation in PPP funding.