Where Europe stands on gay marriage and civil unions 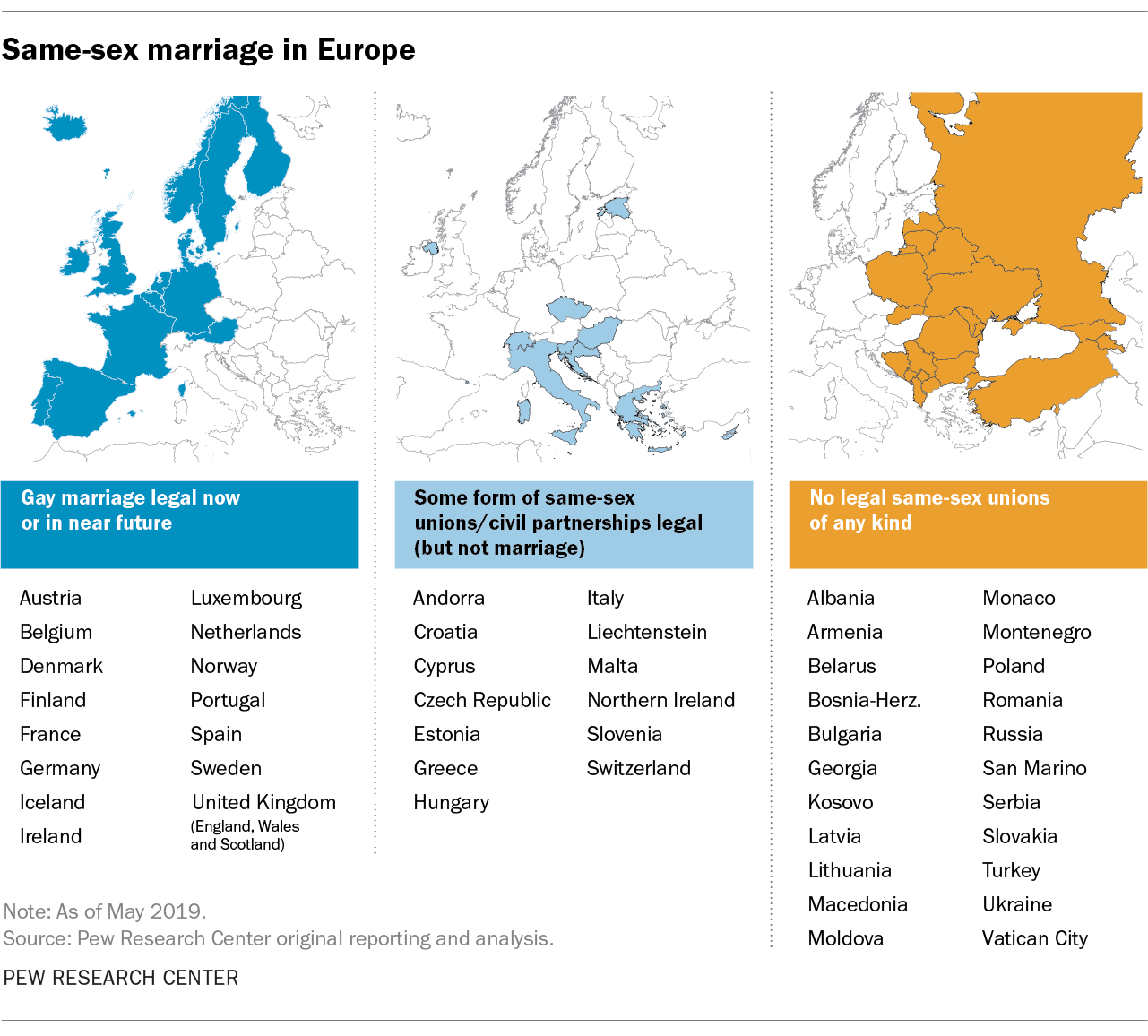 More than 18 years after the Netherlands became the world’s first country to allow same-sex marriage, Austria became the latest European nation to legalize the practice. The change in Austria’s marriage laws on Jan. 1, 2019, was prompted by its highest court, which in 2017 ruled that the country was discriminating against gay and lesbian couples by not allowing them full marriage rights.

Austria is the 16th European jurisdiction to legalize gay marriage. This number counts England and Wales together and Scotland as a separate entity, since those parts of the United Kingdom passed two separate pieces of legislation on same-sex marriage. Northern Ireland, the other UK constituent state, has not legalized such marriages.

A more prominent exception in Western Europe is Italy, which has historical ties to the Roman Catholic Church. In spite of these ties, Italy began recognizing same-sex civil unions in 2016. Switzerland also offers same-sex couples the option of civil unions.

Majorities of adults in all 15 countries in Western Europe surveyed by Pew Research Center in 2017 support same-sex marriage, including roughly six-in-ten Italians and three-quarters of Swiss adults. Support is even higher in Sweden (88%), Denmark (86%) and the Netherlands (86%).

By contrast, people in Central and Eastern Europe are broadly opposed to the practice. Just 5% of Russians and 9% of Ukrainians, for example, say they favor allowing same-sex marriage. Figures in Poland (32%) and Hungary (27%) are higher, though Poles and Hungarians who support same-sex marriage remain in the minority. The Czech Republic is the only country out of 19 surveyed in Central and Eastern Europe where a majority of adults (65%) support gay marriage.

Likewise, no country in Central or Eastern Europe – not even the Czech Republic – allows same-sex couples to legally marry. However, the Czech Republic, along with Croatia, Estonia, Hungary and several other countries in the region, does allow civil unions. Greece joined this list in late 2015 when it agreed to begin recognizing same-sex civil partnerships despite opposition from the Greek Orthodox Church. Slovenia also allows civil unions, but its voters rejected a 2015 referendum that would have legalized full same-sex marriage. (Ireland, on the other hand, became the world’s first country to approve same-sex marriage by popular vote in 2015.)

More than half of the entities around the world that allow same-sex marriage are in Europe, though Taiwan recently become the first Asian jurisdiction to join the list.

Note: This is an update of a post originally published June 9, 2015.