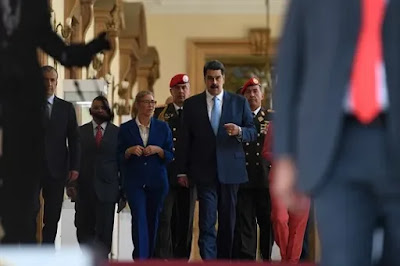 Rafael Acevedo is a distinguished Venezuelan economist, now in part-time residence at Texas Tech University, who is deeply concerned about the future of his native country. Socialism has brought Venezuela to rack and ruin, and if the country is to recover, a move to the free market is essential.

Many have said the same thing, but Acevedo has done much more than bemoan his country’s fate and point to the obvious remedy. He is the head of a think tank called Econintech, and he and his collaborators have proposed detailed plans for the reconstruction of Venezuela from its present state of wreckage.

In Prosperity and Liberty, Acevedo has gathered together a number of these plans, as well as essays by eminent scholars who tell Venezuela’s sad tale and compare the situation of the country with what has taken place elsewhere.

A vital point made in the book is that Venezuela’s descent into disaster did not begin with the overtly socialist regime of Hugo Chávez. To the contrary, the relatively free economy that had existed before 1958, albeit under a political dictatorship, was gradually supplanted by interventionist policies that brought with them massive corruption and a decline in economic growth. Though Venezuela is blessed with immense natural resources, oil deposits foremost among them, these did not suffice to fend off disaster.

Given the economy’s poor performance, what was to be done? One might think the answer obvious, a return to a freer economy, but unfortunately another path gained popularity. Advocates of this path said that Venezuela’s economic problems resulted not from too much socialism, but rather from too little of it. As Acevedo and Luis Cirocco note in an illuminating essay,

Over time, the gradual destruction of economic freedom led to more and more impoverishment and crisis. This, in turn, set the stage for the rise of a political outsider with a populist message: Hugo Chávez. He was elected in 1998 and promised to replace our “lighter” socialism by a form of hard socialism, which he called “the revolution of the 21st century” and which only magnified the problems we had faced for decades. He was able to pass an even more anti-private property constitution. Since Chávez’s death in 2013, the attacks against private property continued, and Chávez’s successor, Nicolás Maduro, keeps promising more of the same. The government has turned toward outright authoritarian socialism.

Students of Austrian economics will not be surprised that the socialist program has failed completely. The most overt sign of economic chaos is the country’s extraordinary inflation rate. Essential consumer goods are at best in short supply, and the entrepreneurial spirit, a key to economic growth, has been stifled. Small wonder that many have fled the country, and many among those who remain cross the border to engage in black market exchanges. It must be said, though, that the contributors to the book fail to address the dire effects of American economic sanctions on the Venezuelan people.

The disaster that has resulted from socialism is by no means confined to the economic sphere. Those who openly challenge the regime have been arrested and sometimes tortured as well, and again, this should come as no surprise. As Bob Lawson and Ben Powell pointed out, “In his 1944 book The Road to Serfdom, Friedrich Hayek argued that a competitive capitalist economy is necessary to sustain democracy, and that once a country becomes ‘dominated by a collectivist creed, democracy will inevitably destroy itself.’” The reason is simple. “Centrally planned economic systems necessarily concentrate economic power in the hands of government planners, who can punish dissent through their economic edicts.” (Lawson and Powell 2019)

If Hayek accurately depicted the road to serfdom, our pressing question becomes: what is the road to freedom? The answer does not lie in the deposing of Maduro and his replacement by his rival Juan Guaidó. He is, sad to say, also a socialist, though not so extreme a one as Maduro, and his program would not rescue Venezuela from the economic doldrums. I should add, though the contributors to the volume do not state this directly, that it would be a path of folly to install Guaidó by force, a course of action urged by many American neoconservatives, ever eager to mind the business of other countries.

As Ron Paul has trenchantly remarked about the recent CIA-backed effort to oust Maduro,

While US Administrations engaged in “regime change” have generally tried to mask their real intentions, this US-backed coup is remarkable for how honest its backers are being. Not long ago the National Security Advisor to the president, John Bolton, openly admitted that getting US companies in control of Venezuelan oil was the Administration’s intent. Trump Administration officials have gone so far as mocking the suffering of Venezuelans when a suspiciously-timed nationwide power failure heightened citizens’ misery…. Was the US behind the take-down of Venezuela’s power grid? It would not be the first time the CIA pulled such a move, and US officials are open about the US goal of making life as miserable as possible for average Venezuelans in hopes that they overthrow their government.

The starvation blockade imposed on Venezuela, denounced by the eminent international lawyer Alfred de Zayas, has brought about great suffering. Most Venezuelans, even those not favorable to Maduro, naturally resent efforts by foreigners to order them to change their government, and they remember with bitterness the CIA-orchestrated coup against Chávez in 2002. Support for such efforts, even in the name of opposition to socialism, plays into the CIA’s efforts, dating from the inception of that agency, to promote at all costs global American hegemony.

Political and economic salvation for Venezuela can come only from the Venezuelan people themselves. They cannot be “forced to be free” but must seek, if they have the wit and wisdom to do so, the guidance of experienced free market economists such as Acevedo and his coworkers at Econintech.

What is the best way to establish a free market economy? Acevedo with penetrating insight accepts the counsel of the greatest Austrian economist of the latter half of the twentieth century, Murray Rothbard. Economic reform must be extensive and fast, not creeping and piecemeal: “Freeing only a few areas at a time,” Rothbard said, “will only impose continuous distortions that will cripple the workings of the market and discredit it in the eyes of an already fearful and suspicious public.”

The above originally appeared in The Quarterly Journal of Austrian Economics (Volume 22 | No. 4 | Winter 2019)