There is a recent paper out on COVID-19 patients that were monitored and treated in the U.S. (3 among them received Remdesivir). This paper is used by several analysts to doubt the effectiveness of Remdesivir. Which in turn resulted in a flurry of articles (here’s one example) in the media casting doubt on the antiviral. I’ve gone through the paper and although it is not a resounding victory for Remdesivir, I actually think it was fairly positive and mostly in-line with what I think I know about this treatment and I explain below why.

I’m long Gilead Sciences (GILD), the company that owns the rights to Remdesivir, and understand I’m likely biased because of that. But, from an investment perspective, I’d be thrilled to find evidence that disproves my inclination that there’s a high likelihood the antiviral is effective. Exiting before it falls back to the levels it traded at before COVID-19 levels is very valuable too. The last thing I want is to sit around waiting for upside that never materializes.

I’m about as far from a MD or virologist as one can be. But I’m not scared to read about things I don’t understand. A lot of reading, searching and common sense can definitely enrich your perspective on an unproven drug like this that’s being given to COVID-19 patients in trials and as a last resort. The table below lists all of my publicly available articles on Gilead and remdesivir:

These all were published exclusively for subscribers at an earlier date. A version of this article was sent to subscribers on 13/3/2020.

The Stat article covering the paper starts off by throwing some cold water on the idea that Remdesivir is effective:

two Wall Street analysts suggested it remains uncertain whether the antiviral therapy will be successful after assessing a new paper that examined a dozen U.S. patients.

…”Based on our review of the clinical and virological courses, we believe remdesivir’s contribution to efficacy remains unclear, and with a side-effect profile that may not be completely benign,” the RBC analysts wrote in a note to investors. “We continue to see a less than 50/50 possibility that the drug is ultimately proven effective.”

…More specifically, they maintained there was not a “clear temporal association” between treating patients with remdesivir and improvements in oxygen requirements, fever, and viral results, compared with hospitalized patients who did not receive the investigational drug. The analysts also noted that remdesivir patients experienced nausea, vomiting, rectal bleeding, and elevated liver enzymes.

I’ll go over the analyst comments first (this is what a lot of institutional investors are reading so it is always interesting to learn what they are thinking and why the market is not as enthusiastic as I’ve been for a while). Maybe they are right. Maybe I’m wrong.

I agree that based on this paper remdesivir’s efficacy is unclear (I base my variant opinion of high likelihood of efficacy on a myriad of factors. Not just this paper.)

Side-effect profile may not be completely benign (you could say so based on this study) but here’s Gilead’s response which is also cited in the article:

… We also have safety information from trials… in Ebola.” In Phase 1 single and repeated dose safety and pharmacokinetic studies in more than 80 healthy humans, the drug exhibited “predictable dose-proportional pharmacokinetics with no observed serious adverse effects. Transient low-grade elevations in liver transaminases were observed during the Phase 1 studies in some participants – the clinical significance of these laboratory changes is not known.

“Clinical trials have also been conducted in Ebola survivors in West Africa, and in patients with acute Ebola virus disease in the Democratic Republic of Congo. As of January 18, 2020, more than 500 individuals have received at least a single IV dose of remdesivir, of which 400 were patients in the DRC with acute Ebola and were treated either in a Phase 2/3 trial or in emergency investigatioanl protocols, or MEORI. In these studies, no significant adverse events or laboratory abnormalities were attributed to remdesivir by study investigators.”]

I’m not ruling out side-effects but I think the FDA will accept quite a lot if it gets the mortality rate down and people out of the hospital while waiting for a better option IF there are pronounced side-effects.

A 50/50 probability of the drug ultimately proven effective seems an awfully low probability for something that is in so many late-stage trials. I’m reading about the actions taken by the government and the scuttlebutt information from Twitter and such and I’m at 90%+. It is actually a good thing the sell-side is materially lower (unless they are correct) because if they were at 90% too; why isn’t the stock up a bit more?

4) Analysts see no clear improvements in patients on remdesivir

The patients are anonymous but numbered and I’ll refer to them by number. About the patients that didn’t see clear improvement:

Patient eight is in his sixties. Is a smoker, has one lung removed, hypertension, coronary artery disease, COPD, history of lung cancer status. He/she has been on oxygen for a few days before receiving remdesivir. After receiving it, he is symptom-free in 3 days. Continues to receive oxygen after COVID-19 symptoms are gone.

Patient nine is in his 30’s with fatty liver and diabetes 2 and has been hospitalized for seven days before receiving Remdesivir. The next day patient nine is put in the ICU and on oxygen. Four days later this patient is out of the ICU and off oxygen. It still takes another nine days of hospitalization until all symptoms are gone. Hospitalization continues after that. I can’t be sure but I read this timeline as one where it was truly given as a last resort (my information so far is that it is much more likely to be effective the earlier it is given; before it is a life or death situation).

Compared to the other patients:

READ ALSO  Topsy turvy - Have banks now got too much cash? | Finance & economics

Patient 1-5 did not get hospitalized. Perhaps these were not in the 20% that get the severe disease.

Of the patients that were hospitalized as well but not put on Remdesivir 3/4 were in their 50’s and one patient in her 60’s (patient 7). Only the latter had an underlying condition of heart disease.

The study specifically states that remdesivir was basically only given to the worst of patients.

Patient 7 is in frail condition but basically tests positive and then has no more symptoms a week later without receiving oxygen. This looks a little bit like the mild version of covid-19 contracted by a frail patient given hospitalization continues for a long time after symptoms are gone.

Patient 10 hospitalized and is symptom-free in three days. These are initial COVID-19 patients in the U.S. so I suspect they were aggressively admitted into the hospital but looks a bit like it may have been a mild case.

Patient 11 hospitalized in the second week and put on oxygen but free of oxygen three days later. Symptom-free after about a week. This is a patient in their 50’s.

Patient 12 hospitalized in the second week but never put on oxygen. Symptom-free after a week. This is a patient in their 50’s.

If I take the analysts’ own words:

not a “clear temporal association” between treating patients with remdesivir and improvements in oxygen requirements, fever, and viral results, compared with hospitalized patients who did not receive the investigational drug

And I look at the population that did and did not receive Remdesivir does their analysis reflect positively or negatively on remdesivir?

There may not be a clear difference in the time it took for them to recover but the patients that received Remdesivir were clearly representative of the group that’s generally considered much higher risk; people with underlying health issues.

I went through the paper and here are the things that jumped out at me:

All patients recovered or are improving, and three patients tolerated treatment with the investigational antiviral remdesivir.

Pretty good survival score especially given the profile of age, underlying conditions and percentage of hospitalizations.

Four of five patients with ≥1 underlying medical conditions were hospitalized (Tables 1 and 2).

Not new information but looking through the cases underlying conditions seem to be a very significant risk factor.

Two patients received a short course (≤3 days) of corticosteroids. Three, including one who also received corticosteroids, received the investigational antiviral remdesivir (Gilead Sciences, Foster City, California) under expanded access (compassionate use) for a duration of 4-10 days.

I think this is no longer standard practice as it is thought to increase bad outcomes.

Remdesivir was discontinued after improvement in each patient’s respiratory symptoms.

Two patients were on it for five days and one for ten days. Trials are being conducted both for five and ten days.

This is an important passage because aminotransferase elevation can indicate liver damage. This can be caused by drugs so could be indicative of a problematic side-effect. However, organ failure could also be one of the effects that COVID-19 ultimately has on patients that become very ill. As Gilead highlighted the Ebola trials with much higher N’s did not attribute adverse side-effects like this to remdesivir. It is possible that the complications occur here because a new disease can make for a new dynamic. However, I think it’s unlikely, for now, this is a remdesivir specific problem.

Patient 9, the most severely ill among this series, experienced sudden clinical deterioration late in the second week of illness. This was the only patient with SARS-CoV-2 RNA detected in serum, and detection in serum was temporally related to clinical deterioration. Similar observations have been described previously.24,25 Increased proinflammatory cytokines have been observed in patients with COVID-19,17 and it is possible that cytokine dysregulation and endothelial dysfunction contribute to both clinical worsening and SARS-CoV-2 RNA detection in serum.

If you ask me it is fairly miraculous that this patient made it if Remdesivir doesn’t work. My understanding is that this is happening if your own immune system goes into overdrive and is causing more damage to you than the actual virus. I sometimes hear medical people talk about cytokine storms and it sounds very bad.

What I understand is that it can be caused by drugs. This is not that likely to happen because of Remdesivir given the Ebola trials (this is why these Ebola trials are such an enormous leg-up vs. the competition that has to prove safety from phase 1 up). Even if it is caused by Remdesivir this can sometimes be mitigated by using lower doses, infusing slowly or administering anti-histamines before and during administration of the drug (according to this paper).

Three hospitalized patients received the investigational antiviral remdesivir under expanded access (compassionate use) at the time of clinical worsening based upon a decision by each patient’s clinician.

And here’s a graphic with the timelines of the illness and treatment: 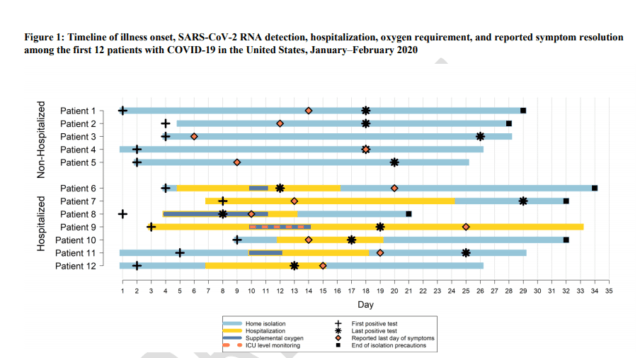 This is an interesting paper but even more interesting that the sell-side views it negatively. The baseline for a phase 3 trial to result in approval is way higher than the assumed coinflip (a naive objective baseline could be 62% based on this paper) and in this case, there are additional factors (discussed in my previous articles) indicating this has a good chance to get to market, yet analysts come up with coinflips. I’m going to hold on to Gilead for a while longer.

Check out the Special Situation Investing report if you are interested in uncorrelated returns. I look at mergers & acquisitions, spin-offs, companies with buyback programs, rights offerings as well as unique opportunities like Gilead today, which is so well positioned with its Remdesivir cure.

Disclosure: I am/we are long GILD. I wrote this article myself, and it expresses my own opinions. I am not receiving compensation for it (other than from Seeking Alpha). I have no business relationship with any company whose stock is mentioned in this article.