What Should We Think About $5.00 per Day Cruise Ship Wages? 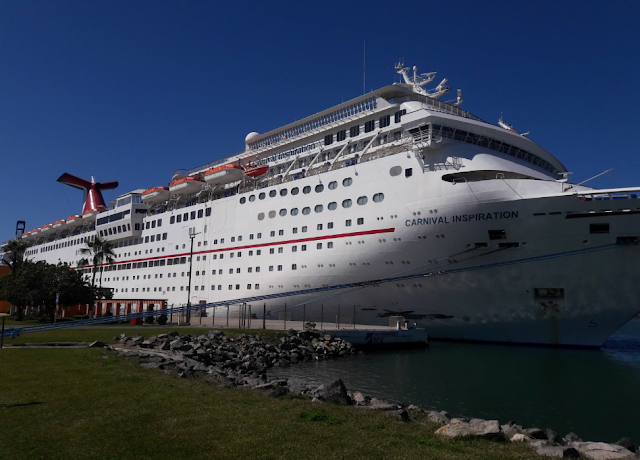 Hey Bob,  my wife & I recently went on our 2nd carnival cruise, 5 days,  4 nights. This time we took some family members along. The cruises are pretty cheap (around $500 for each couple) and it’s fun. They depart Long Beach, CA, stop in Catalina Island, then Ensenada, and back. (Attached is a pic I took of our ship while it was docked in Ensenada.)

At one point we were talking with one of their friendly employees, who told us that they earn $70 for 2 weeks (14 days) work. That’s $5 per day, before tips. They noted that if the people don’t give gratuity,  they earn very little. The service offered on the ship is very professional, attentive & classy.

That reminds me, in Catholicism, two of the
four sins which “cry out to heaven for vengeance” are oppression of the poor (Ex 2:23), and defrauding workers of their just wages (Jas 5:4).

What’s your take on paying someone basically slave wages for working 13 hours per day? $5 per day divided  by 13 hours is .38 cents per hour! Granted, that may be the going rate for the countries these people are from, and also why none of these big cruise ship operations are U.S. companies.

Either way you slice it, it still seems pretty F’d up, doesn’t it? I was surprised that the ship’s staff is paid so low.

I will add that at the end of each cruise they put a bill on your door (even though you’ve already paid for the cruise) stating that you owe a remaining  balance  (It works out to about  $50 per person.) The thing I didn’t like about their demand notice was that they phrase it as if their suggested gratuity is mandatory, when it is not.

Maybe this will help in looking at the low wages.

Would you be willing to force these people to not take these jobs because of the low wages?

If they are taking these jobs, it means that is the best opportunity they have.

Also, you note that their wage comes out to 38 cents per hour. The current federal minimum wage in the US is $7.25 per hour. That’s 19x more than what they are being paid  (never mind overtime calculations).

You mentioned that the cruise cost was “pretty cheap” at $500 per couple.

One advertises a cruise where they say, “We pay our crew the current market wage and your cost is $500 per couple.”

The other says, “We currently pay wages above market that are equal to current US minimum wages and your cost will be $3,200 per couple.”

Which cruise are you going to take?

The free market is about free exchange. If people choose to do something and aren’t coerced, it means that is the best alternative they see. I don’t see the workers being defrauded. The cruise line looks at labor markets and demand for cruises and attempts to put a package together that works. That is all they are doing.

As for the gratuity notice, I would have torn it up and tipped twice as much to the staff that worked directly for me.