What is the Problem With, For “Social Justice” Purposes, Taking Half of the $203 Billion Wealth of Jeff Bezos and Giving It To the Poor? 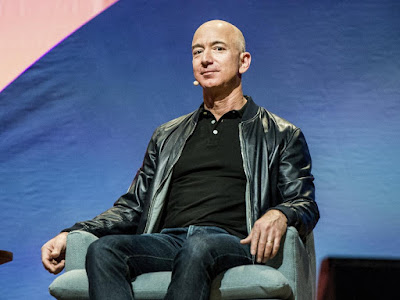 Here’s a Don Boudreaux letter to a college student writing a paper on what he calls “the social justice of wealth redistribution”:

Thanks for your e-mail.

You ask: “Why shouldn’t government tax away half of Jeff Bezos’ wealth and give it to America’s poor people.” In your assessment, “this would be fair without hurting Bezos.”

My disagreements with your assessment are many, but I have time now to list only three.

First and primarily, it’s immoral to take stuff belonging to other people. Because Bezos acquired his wealth lawfully, to take it is wrong. Note also that he acquired his wealth in a manner that bestows enormous benefits on hundreds of millions of his fellow human beings, and that he has already paid billions of dollars of taxes on his earnings.

Second, Bezos’s wealth is now reported at $203 billion. With 34 million Americans currently below the poverty line, confiscating half of Bezos’s fortune and distributing it equally to these poor Americans would give each a one-time windfall of $2,985. A nice sum. But it’s not enough to transform their lives. More fundamentally, people’s lives aren’t transformed for the better by being given windfalls. Transformation comes from within, personally, and from better policies that allow the creation of more and better opportunities.

Third, Bezos’s net worth is what it is because the vast bulk of it is invested in Amazon and other productive enterprises. If he suddenly must turn over half of his wealth to the government, he would not draw it from his consumption (which is what you mean when you say that this policy would not hurt Bezos). He would draw it out of his investments. And resources currently used in valuable productive uses would become much less valuable when turned into goods and services for current consumption. And so to give each poor American $2,985 paid for by Jeff Bezos would require that far more than half of his fortune be seized.

You might nevertheless be good with this outcome, for it would still leave Bezos very wealthy. It would still not put a dent in his lifestyle. But the American economy would suffer greatly. Not only would the economy lose, in one fell swoop, well over a hundred billion dollars of assets – which means the loss of whatever outputs those assets produce – but lose also untold trillions of dollars of assets over time that would have been, but will not be, created. Like it or not, people do not invest heavily when government seizes large chunks of the fruits of their successes.

Sincerely,Donald J. BoudreauxProfessor of EconomicsandMartha and Nelson Getchell Chair for the Study of Free Market Capitalism at the Mercatus CenterGeorge Mason UniversityFairfax, VA  22030