Headquartered in Wheeling, West Virginia, WesBanco, Inc. (WSBC) is a $16.8 billion asset holding company and parent to WesBanco Bank. WSBC has 236 branches all along the Ohio River valley. The bank has a significant footprint in major cities like Pittsburgh, Louisville, Cincinnati, Columbus and Washington, D.C.

At the end of the second quarter the $11.1 billion loan portfolio had a real estate oriented tilt; commercial real estate totals more than 51% of the entire portfolio, commercial and industrial makes up 23%, residential real estate is 17%, HELOC totals about 6%, and the remaining 3% is consumer type loans.

In my mind there are two major factors that support my bullish stance on the shares. First, when looking at the chart below, one can derive that WSBC has never traded this cheaply on a price to tangible book value per share valuation in the last 25 years. I believe the current valuation to be rather unfounded since profitability levels remain positive and operating metrics continue to be better than the banking average. Second, I believe the credit profile should make it through this recession better than regional peer banks. When looking at its current credit quality I feel very comfortable with recommending this bank for a long-term investment.

The second quarter results, with respect to the first quarter, were rather lack luster in my mind. While most banks were struggling to see any material net interesting growth, WSBC saw a $1.2 million decreased, which ended the quarter at $119 million. With that being said, WSBC did grow overall revenue as noninterest income saw sizable growth on a linked quarter basis.

While the second quarter did see about $725 million of gross loan growth, the material downside in the net interest income came from the net interest margin ((NIM)) compression. When the quarter was all said and done, I found that 22 basis points of NIM compression drove the entire lower linked quarter spread revenue result.

The NIM compressed for a multitude of reasons, with the first (and most pronounced) being lower loan yields driven by the Federal Reserve’s incredibly accommodative interest rate policy. Second, the net loan growth was actually propped up by $836 million of 1% yielding PPP loans. While the quarter did see loan growth, the new loans put on the balance sheet were lower than the average, which by itself was falling from the first quarter levels.

Prior to the quarter, most people understood that WSBC has a sizable amount of revenue come from fee income, which relative to spread revenue is rather insulated. The second quarter results were buoyed by a larger than normal gain on sale of loans, along with strong Other income. Strong mortgage banking income and swap-related fees (from commercial customer’s looking to hedge rates) drove most of the core fee income upside. 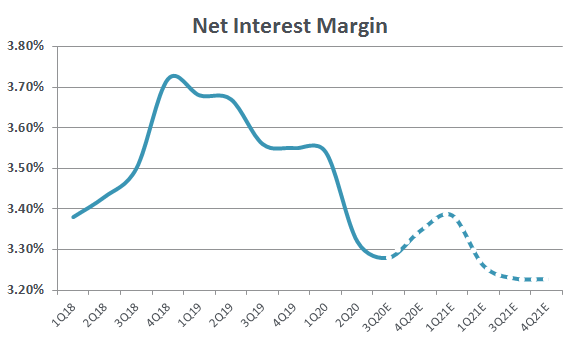 When looking at the chart above, one can see that I am a little hesitant on the strength of the NIM going forward. While it is very likely to see a handsome bounce in whatever quarter PPP loans are forgiven, when that noise settles out I believe the future- more sustainable NIM level is lower than it is today.

The reason I think this way is because the low costing deposits can only insulate the margin so much. Meaning that as loan yield compress it can only be mitigated by lower funding costs by so long. Funding costs are very low already and the future yield reductions will have minimal effects, in my mind.

With that being said, I believe the bank is going to continue to see strong fee income for the foreseeable future. While these most recent second quarter results were a little stronger than expected (because of non-reoccurring items), I find WSBC’s future revenue to be pretty strong relative to peers. I am only modeling 3% lower from current levels at its deepest trough point.

What gives me the most confidence in my bullish stance, at least in the short- to medium-term is the overall credit profile. When looking at the last recession (chart below), one can see that overall net charge-offs ((NCOs)) were better than the average bank. Also, the second quarter of 2020 on had 0.07% of NCOs to average loans, which was down from first quarter of 2020 levels (of 0.18%) and fourth quarter of 2019 which had 0.20%. 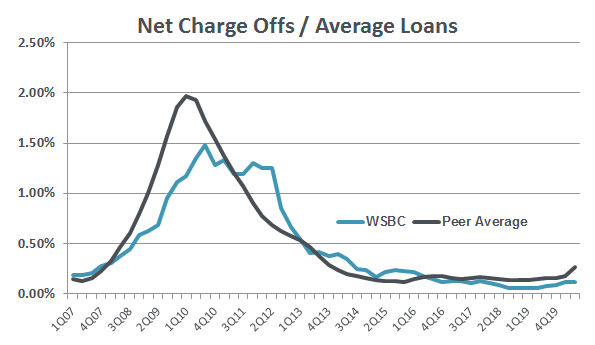 While I might not have been overall optimistic on the bank’s credit profile in late April, I did find the massive provision expense in the second quarter to be reassuring. The provision expense was needed in my mind, in order to true-up any lingering thoughts about the credit soundness. In terms of magnitude, WSBC added $62 million in the second quarter, relative to $29.8 million from the first quarter. While both of these were somewhat painful for current shareholder, I do believe it was the correct move for the longevity of the bank. 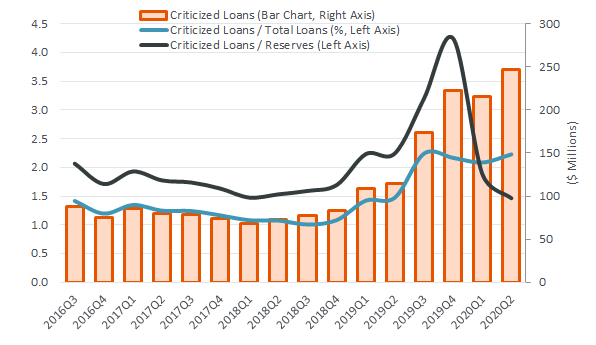 I think the chart above puts a great perspective on the bank’s credit profile. While criticized loans have increased (orange bars), the overall ratio of criticized loans to total reserves (black line) has trended significantly lower after management bit the bullet and added to the reserve.

While most of my subscribers would already know this, but my target for the criticized loans to reserves ratio is to be below 2.0x. As one can see, as the end of 2019 things were looking pretty dicey to me. However, the prudent action my management in 1H20 gives my confidence in the overall reserve levels. It currently stands at about 1.5x, thus checking the credit box in my mind.

While most people dont really like a fee income oriented bank (like WSBC) in the middle of a economic growth period, I think right now it makes sense to add share to any portfolio. When times are good rates increase and the loan portfolio can generate significantly more return than fee income ever could. However, as rates fall or are held low by the Fed, the loan portfolio becomes a hindrance. While WSBC’s overall revenue is still a majority spread revenue, I believe fee income can grow more than enough to support revenue from falling.

In my mind the second quarter is a great example. Overall net interest income was sluggish, but the strength in fee income more than corrected the falling topline, with the net linked quarter resulting showing strength.

Finally, the bank has proven itself to pretty good at underwriting as proven by the last economic recession. While the first half of the year was difficult for overall profitability since the provisions were rather large, I believe the bank is on solid footing now and should perform better than peers for the remaining portion of this pandemic induced recession.