Wells Fargo’s (WFC) last earnings were less than stellar. Even when litigation costs ($3 billion) are considered, Q4 EPS was an anemic $0.93 versus analysts’ estimates of $1.10. Net interest income dropped compared to Q3, net interest margin (NIM) fell 13 basis points, and the net loan charge-off rate worsened. The bank’s new CEO proclaimed, “Our cost structure is too high,” although he views the firm’s shortcomings as opportunities for future profits, once ameliorated.

As if the problems endemic to the bank weren’t enough, in a desperate attempt to stem the economic damage associated with COVID-19, the Fed slashed rates to 0% to 0.25%. Everyone believes this will lead to lower bank profits. Baird analyst David A. George estimates the Fed’s move will create a 15% headwind for banks’ EPS.

Undoubtedly, the situation at Wells Fargo is less than rosy; however, the shares are trading at near historical value levels, the company boasts a yield over 7%, and there are reasons to believe the business presents a good risk/reward profile.

Furthermore, it’s possible this crisis could remove obstacles to the company’s growth and provide a delayed but substantial tailwind.

Early in 2018, the Fed took the unprecedented action of placing an asset cap on Wells Fargo that prohibits the company from growing beyond roughly $1.95 trillion in assets. The company cannot add deposits or loans unless it sells other assets. The Draconian measure was the consequence of what the Fed referred to as Wells Fargo’s “widespread consumer abuses.”

Under pressure from management, roughly 3.5 million fake accounts were created, and as many as 570,000 customers were forced to buy unnecessary car insurance. In turn, roughly 20,000 customers’ cars were seized. A “software error” caused 400 customers to lose their homes.

Initially, it was thought that Wells Fargo would meet regulators’ demands, and the limit would be lifted. In the middle of last year, Fed Chairman stated he had no intention of lifting the sanction.

“…remove Wells Fargo’s asset cap for now.” “In our view, now is not the time for a big bank to pick and choose deposit growth for the sake of an asset cap.”

Wells Fargo asked Federal regulators to remove the cap to assist businesses and customers affected by the COVID-19 crisis. Considering the peril the US economy faces, the fact that Jerome Powell is largely the arbiter of this situation, and that the Fed is desperate to prevent an economic downturn, I will posit the odds are in Wells Fargo’s favor.

If regulators drop the cap, a Sisyphean burden will be released from the bank, and Wells Fargo will be freed from a two-year limit on growth.

The bill is designed to aid small businesses, and I fear there is no mechanism in place to approve the enormous number of loans needed to avert a meltdown in the small business community.

The SBA averages 50,000 7(A) loans annually totaling $30 billion. There are over 30 million small businesses in the US. Can the number of affected businesses be serviced by lending agencies?

Over the last twelve months, 14% of all banks, non-bank lenders and credit unions processed SBA loans.

It is reasonable to believe the government will need every business with the wherewithal to participate in the SBA loan process.

Ordinarily, becoming an SBA lender is not an overnight process. Wells Fargo is not only an SBA preferred lender, in 2019 it was the 3rd largest lender of loans below $350K and 2nd fastest closer. Therefore, it is reasonable to assume the Fed will lift the asset cap out of necessity. Wells Fargo is needed to expedite SBA loans.

If Wells Fargo approves a large number of SBA loans related to the aid bill, I posit the relationships created between the affected businesses and the bank will provide long-term tailwinds.

Roughly 15% of Wells Fargo’s assets are in residential mortgages. Bank of America, Citigroup (C), and JPMorgan (JPM) each have less than 10% exposure to residential mortgages. This provides Wells Fargo with an advantage in that most of the mortgages are fixed-rate loans that do not lose value as Fed rates decline. However, lower rates will likely result in greater refi activity for the company

Furthermore, roughly half of the bank’s funding originates from interest bearing deposits, a greater percentage than the other largest banks. These provide the bank with a cheap source of capital.

According to data released today by the Fed, the largest US banks are experiencing a surge in deposits. In the last three months, the 25 largest banks gained $500 billion in deposits. That represents a 5.3% increase, more than triple the growth YoY. 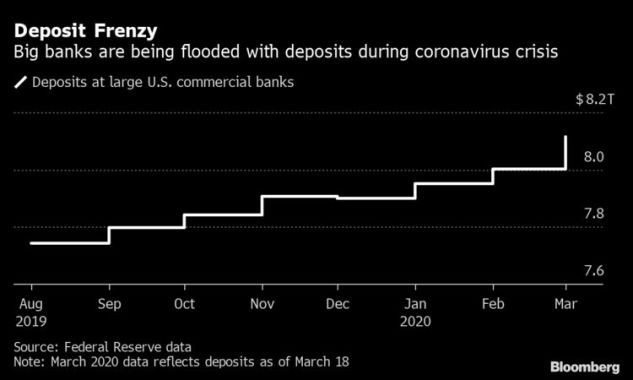 I will also add that since Q4 2016, the company’s shares outstanding were reduced by approximately 18%.

The Current P/E Is Near All-Time Lows

The following chart gives a snapshot of Wells Fargo’s historical P/E ratios. I provide the P/E on the last day of September for each year, as the lowest P/E level occurred during that month. 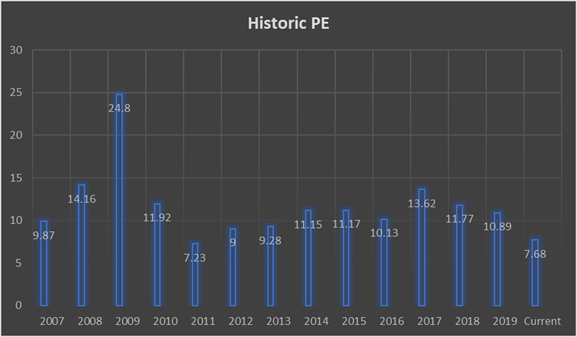 I caution readers the current P/E does not reflect the 15% EPS headwind envisioned by analysts nor the negative effects this crisis may have on earnings. Nonetheless, for those who believe this will be a short-lived event, WFC is trading at a substantial discount.

The company is currently trading at 77% of book value, roughly half that of the five-year average.

As a dividend growth investor, WFC’s yield is enticing. The dividend has a payout ratio of approximately 47% and a coverage ratio a hair above 212%. Consequently, I consider the dividend safe.

I made a small entry-level purchase of shares earlier this week to lock in a 7%-plus yield. I rate WFC a Buy. I am providing this rating due to the large dividend and the prospect of sustained, long-term growth once the cap is lifted.

I provide my buy recommendation with a caveat: I maintain that investors envisioning a long-term economic downturn should not enter into new investments at this time.

I think it is likely regulators will lift the asset cap on Wells Fargo, unleashing a surge in growth. I will add I have a close relative working for WFC in a middle management position. She was very critical of management before the bank’s reprehensible policies were revealed. She has a positive opinion of the current CEO and the policies he initiated.

Although I engaged in a flurry of buying over the last seven days, I am now on the sidelines while I assess the situation.

I wish you well during these interesting times.

I hope to continue providing my articles without cost to SA readers. If you found this article of value, I would greatly appreciate your following me (above near the title) and/or pressing “Like this article” just below. This will aid me greatly in continuing to write for SA. Best of luck in your investing endeavors.

Disclosure: I am/we are long WFC. I wrote this article myself, and it expresses my own opinions. I am not receiving compensation for it (other than from Seeking Alpha). I have no business relationship with any company whose stock is mentioned in this article.