We wrote about Weis Markets (WMK) last December, where we stated that the stock had plenty of potential due to a potential double bottom reversal pattern being in play. Furthermore, despite earnings growth at the time being under pressure, free cash/flow numbers remained elevated and buying volume was strong. As we can see on the long-term chart below, we can say that we did indeed get that bottom, which resulted in an aggressive rally in the share price from mid-February to early May of this year. 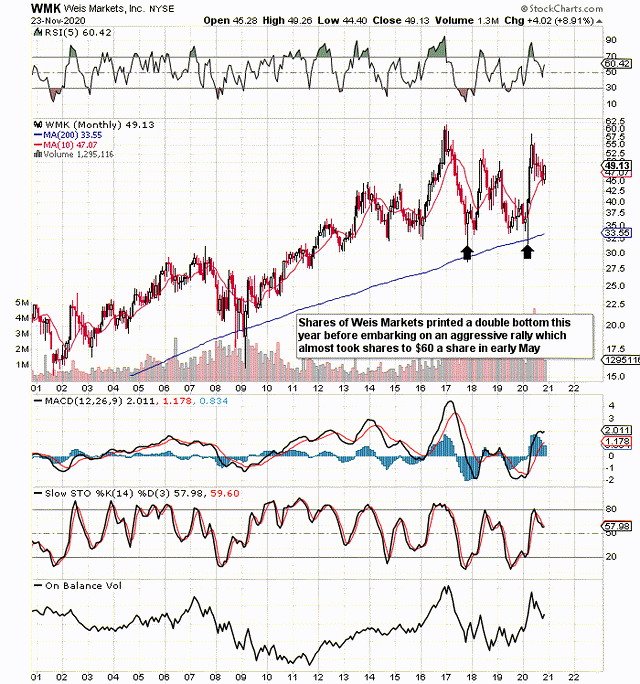 We find that major reversal patterns or also continuation patterns have more possibilities of playing themselves out when viewed on the long-term charts. The reason being that information can be compressed, which enables us study much longer time periods. It is no coincidence also that shares were unable to break through the highs we witnessed back in the tail-end of 2016. This brings a possible double top in play, which is the mirror opposite of the double-bottom reversal. To see if this potential topping pattern has any possibility of playing itself out, we like to look at Weis’ key profitability metrics and how the firm has been looking after its shareholders, plus also its present valuation. Trends in these three key areas can inform us on whether a bottom is close or if indeed something more sinister has begun.

Firstly, the company is just off the back of announcing its third-quarter numbers. Top line sales increased by over 14% in the quarter to hit $1 billion, and net income increased by a whopping 119% to hit $31.3 million for the quarter. Although shares are up close to double-digit percentages since the earnings release, we actually would have expected shares to be trading well past $50 a share at this stage. We state this because the S&P for example is up almost 300 handles since November 2, so equities in general have been enjoying a strong tailwind. Furthermore, ecommerce sales at the company continue to grow at record levels.

The question here, though, is whether the market is pricing in the return of workers to the office. It is fair to say that supermarket chains have gained significant market share this year from the hospitality sector. As the coronavirus vaccine gets rolled out en masse next year and fear dissipates somewhat, we should see the restaurant industry, for example, gain back some of that lost market share. The question is whether the market has this priced in already at this stage for the grocery store industry.

On a strict profitability basis, however, all of the company´s key metrics are on the rise and well ahead of their 5-year averages. Weis’ return on equity has reached almost 11% over a trailing average, and net margin comes in at almost 3%. The $118 million of net income generated over the past four quarters has resulted in $227 million of operating cash flow. Suffice it to say, we have not witnessed these types of numbers in Weis Markets for many a year.

In terms of shareholder returns, the company declared a quarterly dividend of $0.31 recently, which results in a forward yield of 2.52%. Since the float has not really moved in recent times, the annual payment has remained constant at about $33 million. Weis invested $115 million in capital expenditure over the past four quarters, but still managed to generate $111 million of free cash flow. Suffice it to say, with no interest-bearing debt on the balance sheet, and with the firm generating lots of cash flow, the dividend has never been in better shape.

What is interesting also is that despite the aggressive up-move we witnessed in shares in the beginning of the year, the company’s assets, sales, earnings and cash flow all come in cheaper than their respective 5-year averages. These types of numbers again stack the odds in favor of upward pressure on prices, and not the opposite.

On the daily chart, the possibility of a descending triangle was quickly dismissed by the strong rally on strong buying volume over the past few sessions. As we can see from the OBV line (On Balance Volume), we have a bullish trend line break, which is an encouraging sign. Furthermore, the MACD indicator is very close to giving a buying signal. 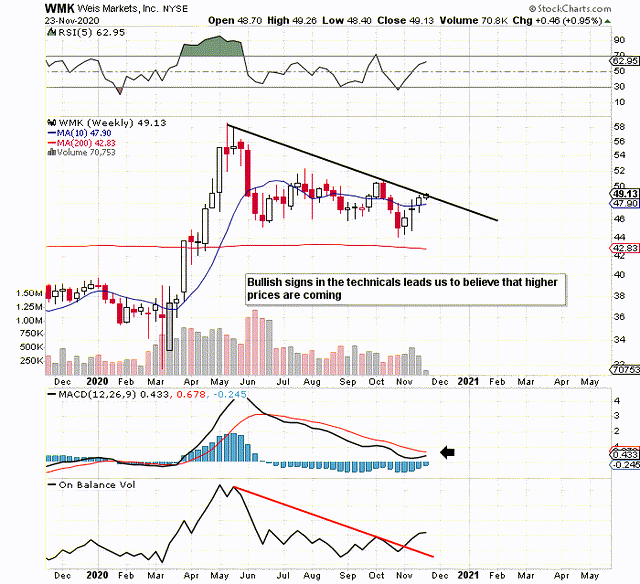 Therefore, to sum up, we give Weis Markets shares little chance of coming down to test their 2020 lows. Although shares failed to rally above long-term resistance this year, the technicals and fundamentals are demonstrating that higher prices are coming. Weis is just off the back of a very impressive set of third-quarter numbers. We expect momentum to continue, which should result in another attempt to take out the May highs. Let’s see what the fourth quarter brings.