Happy Memorial Day and good luck at work tomorrow for those at the stock exchange. Some would suggest the trading floors have been social distancing for years judging by the declining number of bodies on the trading floor. Sports are also returning, but not without rule changes. Tinkering with America’s pastime the last few years to improve viewership was heavily contested. But now that everyone’s paycheck is on the line, the players have been fairly quiet on the recent (ridiculous) MLB proposal to start playing again. We often need to be reminded sports are still a business. And in that respect, it is surprising so few professional sports organizations are on the public markets. This note is part of a weekly series where I attempt to digest current economic and market data to help asset allocators gauge the macroeconomic environment.

Markets saw noteworthy trading activity for the Friday before Memorial Day. S&P 500 volume was 74% and 63% higher versus the same day in 2019 and 2018. The higher volume could suggest most are forgoing the Hamptons this year or maybe they are just working remotely. Either way, Wall Street seems to be on its toes for a busy summer…

Vaccine news is dictating market action lately. It feels eerily similar to the trade tweets we would get whenever the president wanted to stir up some optimism during negotiations the last two years. Hindsight shows volatility in news around trade was a net-negative for markets as it elevated investor anxiety and companies delayed capital investments in wait of greater clarity. While news around a vaccine may bounce stocks higher, a durable rally will require executives to be confident enough to resume capex and real business activity. 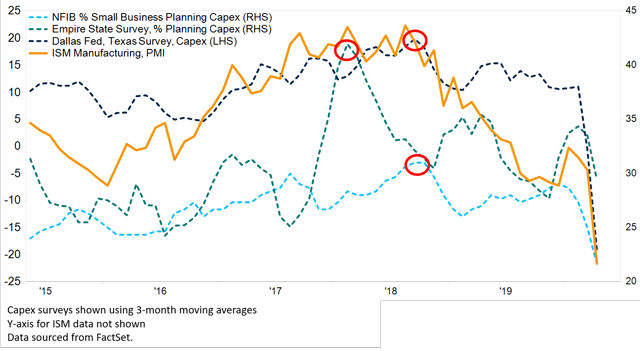 The above chart shows three separate measures for business capex plans. All 3 peaked in 2018 when tariffs were first implemented on China. The peaks coincided with a downturn in PMI manufacturing activity (orange). PMI declines are often associated with economic slowdowns and weaker stock market periods. The continued barrage of drug trial news is not a great reason for long-term investment decisions as it will be difficult for spending activity to return to normal until we see things like a durable trade agreement or a marketable vaccine.

Migration from cities is not showing up in the data

One area not waiting for a vaccine is residential real estate. The number of weekly mortgage applications has been elevated through the health crisis. Some are speculating urbanites are looking to relocate to suburbs, Zillow (ZG) search data suggests otherwise. If there is a major shift in real estate preferences, it will show up here first (and it isn’t). City real estate will return to normal.

It is too early to handicap the bottom in real estate prices of major cities, but the consensus of Americans already believes no one will live in a major city again. Sometimes the consensus is right, such as with the cord-cutting phenomenon that started almost a decade ago. Similarly, if people are right about urban emigration, the decline will probably be much shallower and over a longer period of time than many are expecting. Even if cities like New York need to hit the reset button, gateway city real estate will command a premium again. 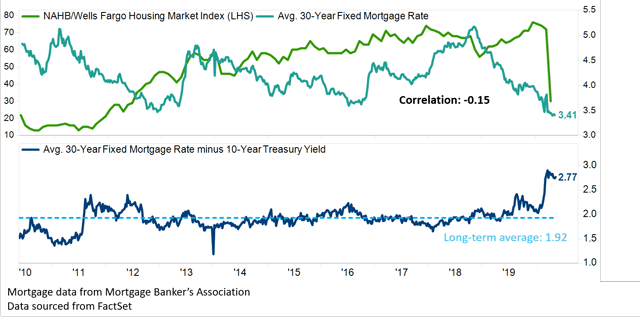 Ultimately, real estate prices depend on mortgage rates, which depend on interest rates. Although mortgage rates are at all-time lows, they can go lower as the crisis subsides and forbearance rates decline. The lower chart shows the spread between the interest rate on 30-year mortgages and the interest rate on 10-year treasurys. In normal times, the mortgages are 1.92% above treasury rates. Today lenders want to be compensated for extra risks with issuing loans during the crisis. The “lower for longer” camp is currently doing virtual open houses in hopes of a sub-3% mortgage rate on the other side of this crisis.

READ ALSO  Big Oil Is Buying Into The Solar Boom

Despite a market rallying off the lows, there is no shortage of political opportunists looking to sway voters with their approaches to handling the crisis given the election is less than six months away. While oddsmakers are handicapping through polls, investors’ poll is through the equity markets. The S&P 500 ETF (SPY) has correctly predicted 13 of the last 16 elections and is batting 1.000 since 1984. The incumbent party typically wins re-election when the market shows a positive return from July 31st through October 31st. 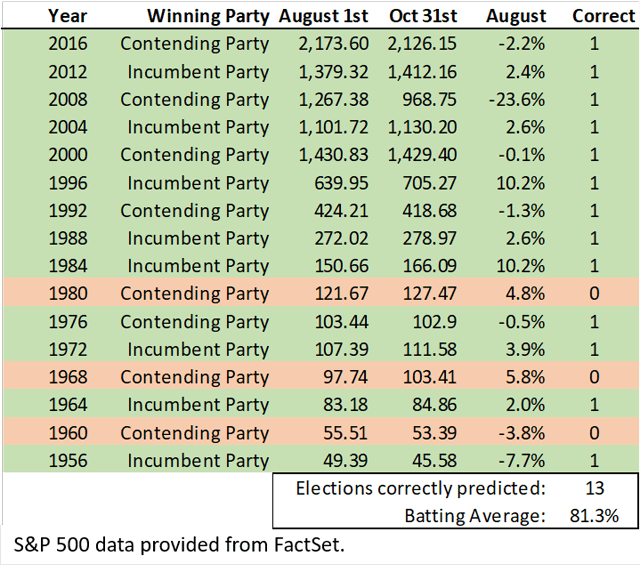 Last week also quietly saw a personnel change at the Office of the Comptroller of the Currency (“The OCC”), now led by Brian Brooks from Coinbase. Perhaps this becomes a defining moment in history books as we hired a Bitcoin lawyer to regulate banks in a period where using physical cash is a health risk and the digitization of just about everything seems reasonable. For now, however, Bitcoin is a liquidity indicator for investors to gauge market conditions. Similar to measuring the Renaissance IPO ETF (IPO) performance against SPY, BTC-USD tends to rise when money is abundant in the financial system. So far Bitcoin futures show a 25% correlation to the IPO index’s relative performance (blue line). By applying a two-month lag to its price, the correlation increases to 37%. This suggests the next leg higher in BTC-USD may still be ahead of us. For real-money investors, it will be a confirmation that liquidity-sensitive sectors continue to signal current monetary policy is sufficient. 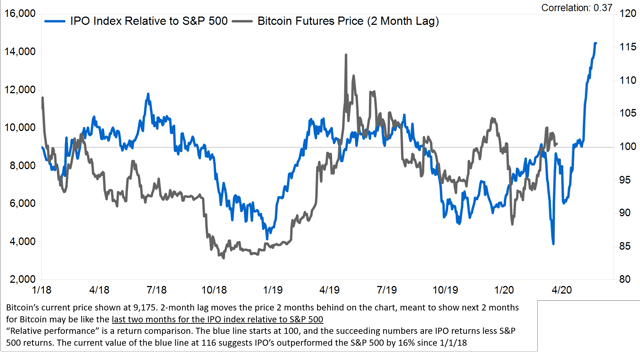 The “high beta rally” that often occurs around market bottoms is behind us and the longer-term factors like free-cash-flow growth should become the leaders again. Short-term unknowns around the virus are a risk and it bears watching the weakest areas for signs of another correction re-emerging. These include high yield spreads, copper, banks, and offshore yuan exchange rates. The latter should be of particular interest as the offshore Chinese currency is traded in Hong Kong. It is encouraging to see the currency is somewhat under control in spite of the weekend developments with Beijing, but news sources are doing a good job at suggesting we are still in the first half of the trade war ballgame.