Good morning and welcome to the second quarter, where ammunition sales are spiking and the only meat in left in the supermarket is likely plant-based. Currently, market futures are pointing to a slightly negative open, confirming the recent rally was a head fake. For those looking for reprieve from this “mess,” sports are still going on in Belarus. Ironically, the country is not immune to the virus (over 150 reported cases) and is avoiding quarantining its people despite being Europe’s last communist country. This note is part of a weekly series where I attempt to digest current economic and market data to help asset allocators gauge the macroeconomic environment.

Depending on your mood, time of day, and the tone of the last article you read, you can come up with either a bullish or a bearish argument on the market at this point. When the AAII has surveyed its members lately, neutral has not been a very popular choice. In fact, only 16.0% of investors were neutral on the market last week, which is almost half of the long-term average of 31.5%. This serves as a reminder that there are still too many unknowns right now for the market to change trend. This has become a politically and financially polarizing situation and those looking for tactical indicators will not find a large enough percentage of bears to call a bottom in market sentiment just yet.

Market prices tend to lead earnings, yet with companies withdrawing guidance for the first quarter and the SEC allowing an extra 45-day grace period for releasing financial results, price does not have a true baseline to go off of. Last week we noted analysts were starting to take down earnings estimates. The current 2020e EPS for the S&P 500 is $158. That is only -11% below the $178 level where the FactSet consensus began the year. Therefore the consensus estimates the market to be trading at just 15.7x earnings with an expected 2.5% dividend yield. Both are very attractive metrics when the 10-year Treasury’s yield is 0.6%. Rather than say the market is wrong, it is more likely the consensus is late to the party. If one were to entertain earnings falling -20% this year to $130, that would leave the S&P 500 trading at 19x FYe 2020 earnings. This is all a guessing game, but investors are not fond of uncertainty, so do not expect a V-shaped recovery simply because the market may be “cheap”. Until then, we can expect trading to be driven by sentiment, liquidity, and perhaps any change in clarity around how long the shutdown lasts.

Market based indicators not improving

Similarly, credit markets are “open”, but spreads widened again last week for both investment grade and high yield issues. Many companies are issuing debt to cover near-term cash flows with coupons much higher than just a couple of months ago — a poor sign for risk appetite. This coincides with the weak signals in the IPO index that have been gyrating in recent weeks. IPOs are a source of liquidity for newly minted public companies, and when money is abundant the average IPO often outperforms — something we are not currently seeing. There is ample value in following market-based signals given how fast-moving these developments are, which makes monthly survey data less relevant. The Atlanta Fed’s GDPNow estimate is a good example of this. The real-time model uses the most recent economic data to predict each quarter’s GDP release. Their current first-quarter GDP estimate is 1.3%, far above the average economist’s first-quarter estimate of -1.3% (FactSet). The website states the model is not able to estimate shutdown impacts immediately since it is strictly based on economic data, but it is clearly falling by the week. For historical reference, the model has been +/- 0.5% of the BEA’s initial GDP release. 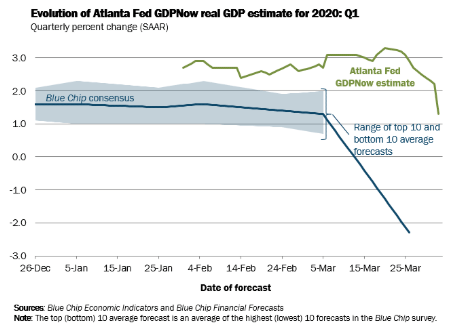 Note: The blue chip consensus forecast is not the same set of economists surveyed on FactSet.

Chart from the Atlanta Fed.

The weekend began with Russia and Saudi Arabia refusing to meet, let alone agreeing on a production cut. Not great news for holders of energy debt that is already at distressed levels, and last week’s data showed this is disturbing the Texas economy on a broader scale. The Dallas Fed Survey fell from 1.2 to a record -70.0 in March. The survey has historically been a coincident indicator for energy demand and a useful tool for gauging energy markets. The silver lining of the series is that the other two lows in this survey occurred at the bottom of energy cycles — and equity markets for that matter — in 2009 and 2016. 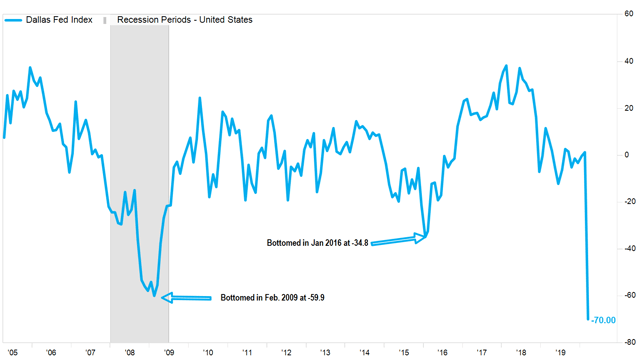 I hesitate to see optimism just yet with demand falling by the day and weekly inventories increasing near record pace. Better to wait for Texas to institute a ban on religious congregations during quarantine before calling a bottom on oil. Last week also saw PMIs fall around the world except in China, where the index inched back above 50, indicating some expansion. It’s important to understand that this is a diffusion index, meaning it only shows the percentage of businesses seeing more activity than last month. It is realistic to see a small increase in Chinese business activity in March given how dire their February reading was. 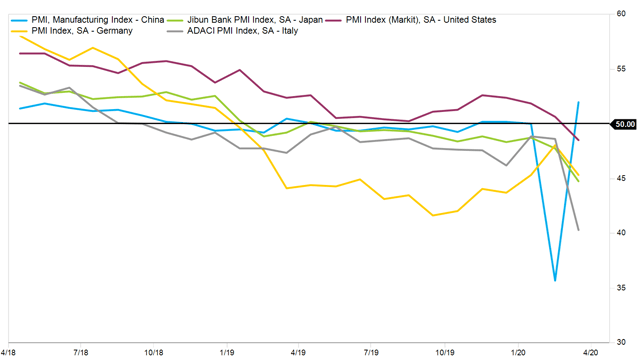 In a normal world all eyes would be on China data to gauge their recovery. However, now that their largest coffee retailer was caught with financial fraud, investors may second-guess the data.

What data even matters at this point

Many of the usual “high-profile” releases are becoming obsolete during this crisis. Home prices holding steady was a yawn (no sales are occurring), the jobs report was completely discounted since the survey was taken too early in March, and the FOMC meeting minutes won’t garner much attention since the Fed acted after their meeting ending March 20. Something I will look for in the minutes, however, will be a change of tune on negative rates or the menu of securities for the Fed to purchase.

After their recent announcement, one investment-grade security the Fed surprisingly isn’t buying is non-agency CMBS (commercial mortgage backed securities). There is serious contagion risk brewing in the real estate market with businesses refusing to pay rent and banks having little choice but to allow payment deferrals. The already-underfunded municipals awaiting tax payments seem to be next on the list. Long-term investors ought to note what companies are stiff-arming lenders, laying off workers, and in some cases pushing out bonuses to executives days before declaring bankruptcy. Consumers and investors alike are unlikely to forget how companies acted during this time and that could affect where people want to work and who they do business with in the future.

We start the week with oil likely in the headlines, but any positive action in the space is likely to come from supply, rather than demand, which is what equity investors would prefer. At this point, bad news is becoming the norm and bulls are hard to find – a contrarian should find optimism in this. Perhaps the market bottoms when the last of the US imposes a quarantine. Any improvement around reported cases or company guidance could get the US markets closer to forming a bottom, which many Asian indices seem to have found several weeks ago. Regardless of when the bottom happens, it is unlikely the country snaps back to normal and equities draw a V-shaped recovery. The strain on markets, families, and faith in governing bodies suggests policymakers will take a cautious approach to reopening the country so as to avoid an immediate relapse.