‘We want him home’: Citgo 6 face uncertain wait for verdict in Venezuela

The last time Veronica and Cristina saw their father, Tomeu Vadell, was in late 2017, just before their annual Thanksgiving dinner in Lake Charles, Louisiana. The family had something extra to celebrate that year: Mr Vadell had recently been promoted to the post of vice-president of refining at Citgo Petroleum Corp, a US-based, Venezuelan-owned oil company.

But that celebration never happened. Out of the blue, Mr Vadell got a call from work. He and five other managers were summoned at short notice to a budget meeting in Caracas, at the headquarters of Citgo’s parent company Petroleos de Venezuela SA (PDVSA). “It’s just two days. It’ll be fine,” Mr Vadell told his family before heading to the airport.

He was wrong. On November 21, on the second day of their trip, the six men were in a meeting at PDVSA when officers from Venezuela’s military counter-intelligence agency, the DGCIM, burst in and ordered them to hand over their ID cards and passports. From there, they were taken to a basement at DGCIM’s headquarters.

For Maduro these folk are essentially a poker chip in a big stakes game. He’s looking for anything that will give him an edge in his dealings with the international community

“For the first 33 days we had no communication from him whatsoever. We had no idea if he was alive,” recalled Cristina Vadell, speaking to the Financial Times from Louisiana. “Since then he’s been taken from one place to another, released from jail, put under house arrest and then taken back to jail again.”

Three years later, Mr Vadell is now one of the so-called Citgo 6 — six men accused by Venezuelan prosecutors of hatching a corrupt plan to refinance up to $4bn of Citgo bonds using a stake in the company as collateral. Prosecutors alleged that the plan, never put into action, would have been highly detrimental to Citgo, PDVSA’s most valuable foreign asset.

In August, the Citgo 6 case finally went to trial, more than two-and-a-half years after their arrest. The men stand accused of money laundering, embezzlement, collusion with a third party and criminal association. If convicted, they are likely to face at least 10 years in jail.

The defendants have been brought to court several times to testify, handcuffed and clad in Guantanamo Bay-style orange jump suits. Journalists have been barred from entry, and it is unclear when the judge might give a verdict, which could come at any time.

Mr Vadell’s defence lawyer, Jesús Loreto, says his client is completely innocent. He points out that Mr Vadell was never on the Citgo board and did not work at the company’s headquarters in Houston.

“He was head of refining,” Mr Loreto told the FT in Caracas. “He had nothing to do with financial issues. He doesn’t handle money and he never handled money. His job is to take heavy crude oil and convert it into gasoline. In Tomeu’s own words: ‘what a refining manager does is open and close valves’.”

The case has also been dragged into the ongoing political stand-off between Washington and Caracas. Venezuela’s president, Nicolás Maduro, accused the men of treason. Last week, US secretary of state Mike Pompeo released a statement marking the third anniversary of their detention, saying: “These six Americans and their families have suffered long enough; it is time for Maduro to put politics aside and let these families be reunited.”

In July, Bill Richardson, a former US ambassador to the UN, went to Caracas and met Mr Maduro in a bid to win the men’s freedom. Although two of the six were moved to house arrest, they all remain in captivity.

Only one of the six, José Ángel Pereira, was a Citgo board member. The other five are Mr Vadell, Gustavo Cárdenas, Jorge Toledo, José Luis Zambrano and his brother Alirio José Zambrano, all managers at Citgo. All were born in Venezuela but are naturalised American citizens or have permanent US residency.

“For Maduro these folk are essentially a poker chip in a big stakes game,” says Raul Gallegos, the director of global risk analysis for the Andean region at Control Risks. “He’s looking for anything that will give him an edge in his dealings with the international community in general and the US in particular.” 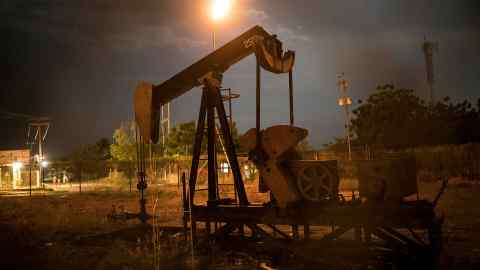 Mr Gallegos said the change of government in the US may help the cause of the six men as Joe Biden prepares to take office in January, and that Mr Maduro might consider releasing at least some of them “as a show of good faith in the re-establishment of a relationship with the US”. Ultimately though, the Maduro regime is looking for sanctions relief, which is unlikely to be forthcoming.

Aged 61, Mr Vadell is the oldest of the six, and suffers from heart problems. He is currently held in the Helicoide, one of the most notorious jails in Caracas. The Venezuelan opposition says there are cases of coronavirus in the prison.

Occasionally, Mr Vadell has been granted permission to make a short phone call to his family, and his wife has visited him twice in Caracas.

“When mum saw him, she didn’t even recognise him,” Veronica Vadell Weggeman said. “It’s heartbreaking to see this person’s life draining away for no reason. His detention has really taken its toll on our mum. They’ve been together for 44 years and married for 34. It’s like losing your soul mate.”

This Thanksgiving will be the fourth that Mr Vadell has been apart from his family.

“Even though we’re Venezuelan immigrants, we’ve adopted the tradition,” Veronica said. “Dad’s the one who cooks the turkey. Not to have dad here is really tough.”

“We just want them to please let him come back to his family and enjoy a quiet retirement,” Cristina adds. “We want him home. It’s a simple as that.”