Wayfair (W) had a stellar performance in the first half of the year, as the company managed to show impressive growth and became profitable for the first time in its history as a public company. Despite this, there’s every reason to believe that the company’s earnings for the year have peaked and its stock will likely depreciate even more in the following months. Our DCF model suggests that Wayfair is overvalued.

Wayfair is a popular online platform for home furnishing products. For years, the company has been expanding its catalog of home improvement and furnishing items and its current variety of choice is its major competitive advantage. Thanks to the stay-at-home order, which was imposed earlier this year, Wayfair was able to benefit from the surge in online traffic, as more people started to purchase products on its platform. The company showed a stellar performance in Q1 and Q2 and currently, it owns a sizable market share of the online home furnishing market.

However, our biggest concern about Wayfair is its market price. By trading at a market cap of over $25 billion, the company is significantly overvalued in our opinion. While its stock, along with stocks of other eCommerce companies, managed to show an impressive growth due to the injection of liquidity into the markets by the Federal Reserve earlier this year, there’s a reason to believe that it will significantly depreciate in the following months and the decline has already started.

Before we describe the reasoning behind our thinking, let’s first look at Wayfair’s performance in Q2, which was its best quarter in history. From April to June, Wayfair’s revenues increased by 83.8% Y/Y to $4.3 billion, and at the end of the period, the company had a total of 26 million customers, an increase from 21.1 million at the end of Q1. In addition, its gross margin was 30.7%, above the consensus of 26.1%, while its average order per customer increased from 1.86 to 1.89. During the period Wayfair also managed to make its first profit as a public company, as its non-GAAP EPS was $3.13, above the consensus by $2.08. In Q2 the company has also generated over $1 billion in FCF. Then in Q3, Wayfair’s revenue growth rate slowed down on a quarterly basis and was up 66.2% Y/Y, against a growth of 83.8% Y/Y in Q2. In addition, from July to September, the company made only $173 million in net income against a profit of $273 million in Q2, while at the same time it generated only $255 million in FCF in Q3.

Considering a Q/Q decline of major metrics in Q3, there’s every reason to believe that in Q2 Wayfair has reached its earnings peak for the year and the situation is not going to significantly improve in Q4 and in the next fiscal year. Going forward, we believe that the revenue growth rate will decrease on a Q/Q basis and as a result, Wayfair’s stock will retract from the current irrational high levels. The recent selling of $126 million worth of Wayfair shares by the company’s insiders suggests that now may be a good time to close a long position, if you still hold it, at a profit, since the upside at this stage seems limited.

The reopening of brick-and-mortar stores along with the increased competition from Walmart (WMT), Target (TGT), Bed Bath & Beyond (BBBY), and other retailers that are also fully operational is the major reason why we believe that Wayfair will not be able to grow as fast as in Q2 in the following quarters. It’s unlikely that states will once again start to close their economies despite the surge of new active COVID-19 cases, so the competition will only intensify going forward.

Also, in its Q2 conference call, Wayfair’s management said that the company has been increasing its hourly wages and it’s also hiring more than 1000 workers. For that reason, it’s safe to assume that operating expenses will remain at relatively high levels, even though sales are already declining Q/Q. In addition, if we also consider the fact that Wayfair relies on UPS and FedEx on logistics, a simple change in shipping rates of those companies will have a negative impact on the overall performance of Wayfair.

There’s also a risk that consumers are not going to spend as much money as before on goods since their purchasing power is currently limited due to the fact that there’s still a pandemic going on and Congress can’t agree on a new stimulus package.

Another downside of Wayfair is that it constantly needs to raise capital in order to run its operations. While the company managed to generate positive FCF in Q2, there’s no guarantee that it will be able to do so in the next few quarters, since in Q3 FCF has significantly decreased Q/Q. With negative TTM margins, we’re inclined to think that the exceptional Q2 performance was a one-time thing and it’s too soon to say that Wayfair will no longer burn cash. Our DCF model suggests that Wayfair will be able to generate positive FCF on a constant basis only in 2023. Its revenue growth rate in the following years is also not going to be as high as it will be in 2020, while its capital expenditures will only continue to grow as time goes by.

Our model suggests that Wayfair trades at a premium of over 60% to its fair value, on the basis of our expectation for slower revenue growth, including a terminal growth rate of 0.50%. 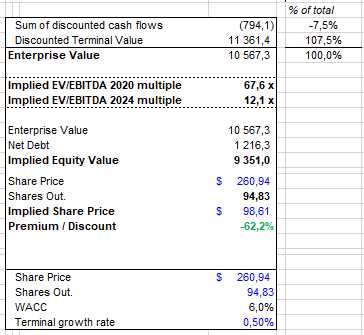 We are not the only ones, who believe that the revenue growth rate will decline, as the consensus now is that Wayfair’s EPS in 2021 will be significantly below 2020 levels. Considering this and the fact that a few months ago S&P Global added Wayfair to its short list, we believe that Wayfair has reached its peak a few months back and its upside at this stage seems limited.

Liked the article? Bears of Wall Street is happy to announce that you can gain access to the growing library of similar articles with a bearish sentiment by subscribing to the #1 Seeking Alpha marketplace service for short ideas called Best Short Ideas. If you like to enter the world of short selling and learn more about unconventional stock market strategies, then give the service a try and opt for the FREE 14-day trial today! More details here.