Desiccated pastures in France’s Loire valley, campsites near Marseille destroyed by a forest fire, hosepipe bans in western Germany and fish farms in Saxony running short of fresh water: parts of continental Europe have been struck by drought for the third year in a row.

While summer thunderstorms have provided sporadic relief for parched fields in the past week, farmers, scientists and politicians say global warming is triggering multiyear droughts — 2018 and 2019 were also dry — and changing the climate of continental Europe in ways that will affect agriculture and the rest of the economy.

This year’s July was the driest in France since 1959 according to the national weather office, with less than a third of normal rainfall, while the average temperature between January and July was the highest since its records began.

Meanwhile, Germany this year had one of its driest spring seasons in more than a century, and rainfall in July was nearly 40 per cent below normal, raising fears about a potential repeat of the plunging water levels on the Rhine and other major rivers two years ago that disrupted shipping and hit the country’s economy.

“The heat has been roasting everything,” said Clément Traineau, a cattle farmer near Angers on the Loire. “We had not a drop of water in July.”

Researchers led by the Helmholtz Centre for Environmental Research said in a paper published in Nature this month that the combined droughts of 2018 and 2019 in continental Europe were “unprecedented in the last 250 years, with substantial implications for vegetation health”.

Successive droughts in the past two decades have caused estimated losses of €100bn and, in the worst-case scenario for greenhouse gas emissions, such events would be seven times more likely in the second half of this century, the paper’s authors said.

According to estimates by the French environment ministry’s Explore 2070 project, average air temperatures are expected to rise by between 1.4 and 3 degrees centigrade in the next 50 years, precipitation will decline by between 16 and 23 per cent, and river flows will fall by between 10 and 40 per cent.

Drought episodes already start earlier in the year and finish later than they used to, according to Denis Caudron, co-ordinator of France’s Fund for the Conservation of Wild Rivers.

“It’s raining less and it’s distributed differently through the year, and it’s snowing less too — the snow cover in the Alps, the Pyrenees and the Massif Central is not what it was,” he said.

Although there was good rainfall during France’s warm winter, which replenished depleted aquifers, the topsoil has been exceptionally dry since July.

“In 2018, the disruption to shipping on the Rhine knocked as much as 0.4 percentage points off German economic output and weighed on fuel prices over two quarters,” said Carsten Brzeski, economist at ING. “Is it something that we look at? Yes. But is it easy to predict? No.”

The Rhine, a vital route for international trade, is flowing at 30 per cent below its usual level at Kaub, a major shipping bottleneck between Koblenz and Mainz, according to Jörg Uwe Belz at Germany’s Federal Institute for Hydrology in Koblenz.

While the river is still 1m above the low water threshold at which shipping could be restricted, he said that water levels would continue to drop until November.

“Everything depends on the rainfall,” said Mr Belz. “If we get rain then it will be all right, but if the drought continues then we will run into trouble.”

Ulrich Roth, a water engineering consultant and professor at Frankfurt University, said climate change appeared to be contributing to the low levels in the Rhine.

“The glaciers melting usually provide a certain amount of water for the Rhine and because of climate change they are getting smaller and provide less each year,” he said — as less snow and ice forming each winter results in less meltwater emerging in the summer.

For the time being, governments are engaged in crisis management. Local authorities in the western German states of Rhineland-Palatinate and Hessen have imposed hosepipe bans in recent days. 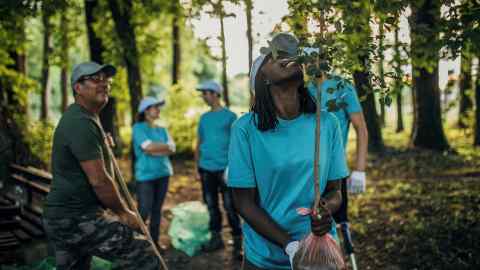 French authorities have imposed water restrictions on all or part of 78 of the country’s European departments, while also trying to help its 450,000 farmers — for example by providing emergency financial aid and easing environmental rules.

But he acknowledged that agricultural strategy would have to change in the longer term and said an official economic recovery plan to be unveiled in Paris next week in response to the coronavirus crisis would include measures “to adapt our farms to the effects of climate change”.

Farmers are already switching crops and changing their methods, with more vines and sunflowers, for example, being cultivated further north, and thirsty, irrigated corn sometimes replaced with sorghum. Delicate white wines are increasingly processed in refrigerated cellars because of the difficulties of vinification at high temperatures.

Christian Huyghe, scientific director for agriculture at France’s national institute of agronomic research, said policymakers and farmers had mostly persuaded themselves that droughts were periodic misfortunes whose effects could be mitigated by more irrigation and other security measures.

After that, however, there would have to be changes in the choice and management of crops, as well as progress in reducing farms’ greenhouse gas emissions which are disproportionately high given their share of economic output, he warned. “There’s too much urgency to say that we have time and we can wait.”