Headquartered in Westerly, Rhode Island, Washington Trust Bancorp, Inc. (WASH) is a $5.8 billion asset holding company and parent to Washington Trust Company. WASH was founded more than 200 years ago and is the oldest community bank in the country. The bank offers a full set of financial services to its three state footprint. More specifically, WASH has branch locations in Connecticut and Rhode Islands, but also has few wealth management offices in Massachusetts too.

Whenever I think about the atypical northeastern community bank, WASH usually comes to mind first. While I believe that the northeast is a little overbanked, WASH has made up for lost ground with its superior credit quality metrics. By “overbanked” I mean that there is too much competition for both loans and deposits, as one can see with the compressed net interest margin (NIM) levels. That said, it’s not just a WASH problem, the whole northeast has a fairly stagnant market with overly competitive yields. In my mind, that area of the country needs more consolidation of banking peers, but that is a different story altogether.

When looking at the valuation of WASH, I feel pretty comfortable with my bullish stance. While the stock has been beaten up pretty good lately, the current valuation allows for a decade-low entry point into a very solid name. In my mind, the credit metrics allow for investors to rest easy about the dividend too. Plain and simple – I think this would be a great dividend play.

While I think the shares are likely to perform a little better than bank peers, the 6%+ dividend yield is rather enticing. For those interested in a stable dividend with sizable share price upside over the next couple years, I think WASH would be a great fit.

In the second quarter, the spread revenue amounted to $30.9 million which was actually down a little from first quarter levels. The roughly $1.7 million decrease, which amounted to about 5%, was largely driven by a pretty significant drop in the NIM rather than a reduction in the loan portfolio. In fact, average earning assets (AEA) were up pretty notably in the quarter. The yield associated with such assets, however, dropped precipitously.

When peeling back the layers of the margin, one can see that average loans grew $261 million while cash (or excess liquidity) grew by $74 million. The AEA yield fell by more than 58 basis points in the quarter as loans repriced lower and excess liquidity was unproductive. Partially mitigating this fairly substantial earnings compression pain was the reduction of interest bearing liability costs. While liabilities did fall more than 33 basis points, it stood little chance at cushioning the entire blow.

The other major component to the bank’s overall revenue line, noninterest income, was up pretty substantially in the second quarter. When compared to the first quarter, the second quarter’s 32% fee income growth was based on strong mortgage banking revenue (up 144% linked quarter). Wealth management saw its assets under advisory increase 15% too, which bodes well for the future. 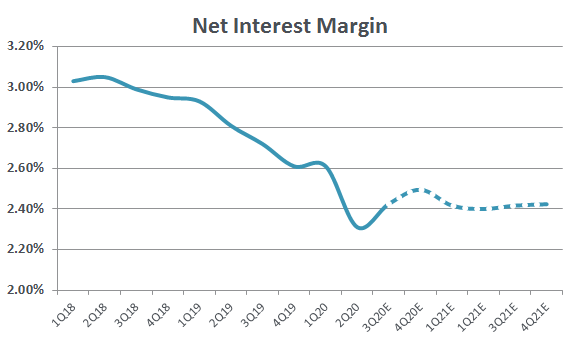 As one can see from the chart above, I am modeling the NIM to bounce a little in the third and fourth quarter. The third-quarter expansion is based on the thought that any excess cash seen in the second quarter is put to use. Even if it is temporarily put into bonds/securities, it is likely to yield enough to cover its cost in liabilities (i.e. on a net-net basis it would help the NIM).

The fourth quarter is likely to be positively impacted by PPP loan forgiveness. From there, I believe overall loan yields and interest bearing liability costs should have already bottomed out.

I don’t believe we are likely to see mortgage cooling off until later this year and the strength seen in wealth management assets should help that line item going forward. Finally, the previously waived transaction/card fees (to help support struggling consumers during COVID lock-downs) in the first quarter are likely to come back relatively quickly.

As one can see from the chart below, net charge-offs (NCOs) appear to be very well managed over the past economic cycle. In my mind, the most important thing to note is that second-quarter nonperforming loans actually fell from the first-quarter levels. While the decline was only $1.9 million, to end the second quarter at $16 million, it’s a strong piece of evidence to support the thesis of such a credit focused bank. 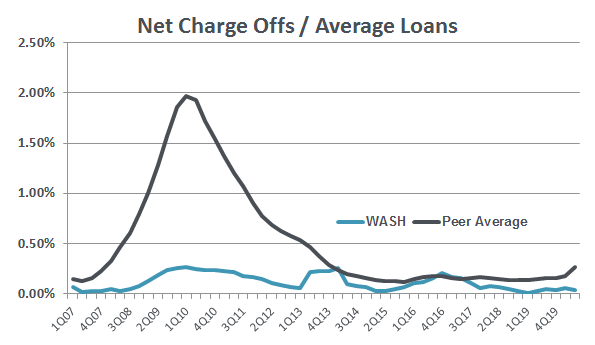 The second-quarter loan loss provision expense was just $2.2 million. While others might think it needs to increase, I believe management was very thoughtful when they front loaded the provision in the first quarter when the bank added $7 million to the reserve. 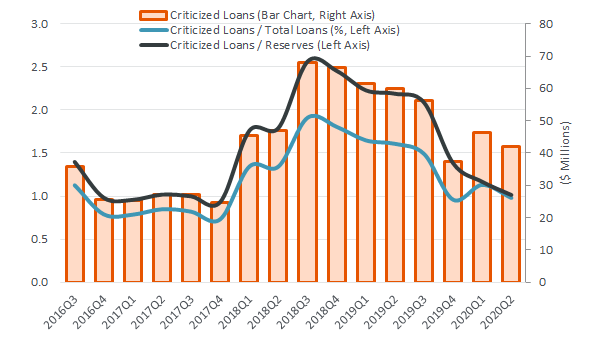 As one can see from the chart above, total criticized loans (orange bars) have continued to work lower throughout the economic downturn. While the loan loss reserve is only 0.97% of total loans, I believe it is more than appropriate at current levels. Currently, the reserve more than covers the entire criticized loan portfolio, indicating it is twice as strong as my benchmark standard for investment.

While it’s somewhat difficult to get excited about banks in the Northeast, especially on a relative basis when compared to national peers, WASH poses a pretty solid setup. My overall revenue and net income projections more than cover the cost of the dividend. Also, I believe future credit costs are likely to be limited in nature.

Should my projection of NIM expansion in the third and fourth quarter be correct, I believe the bank is drastically trading under what a fair value should be. However, even if the margin is flat, overall revenue is still expected to increase slightly by the middle of next year.

In my mind, WASH would make a great investment for those looking for a strong, but stable dividend today. The upside, in my mind, comes in the next 12 to 24 months when the bank is likely to retrace most of its lost ground in terms of share price.