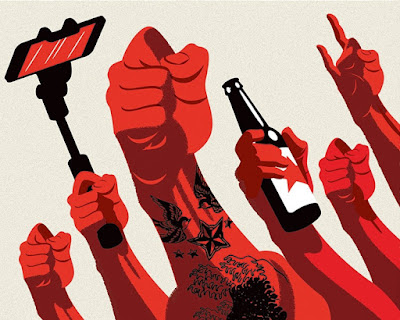 The movement has long been confined to the fringes in U.S. politics, and also on the map. It’s associated nowadays with hipster enclaves of the West Coast, or New York — where the country’s most famous socialists are teaming up on Saturday, when Representative Alexandria Ocasio-Cortez will endorse Bernie Sanders for president at a rally.

But now it’s spreading across the Rust Belt, Midwest and South. At least 60 branches of the Democratic Socialists of America, the most prominent among a bunch of reinvigorated leftist groups — have sprung up in the the past year, mostly in conservative areas where President Donald Trump did well with voters.

Its new recruits are fanning out across states like Pennsylvania and West Virginia, with a focus on people who don’t typically vote. They’re making a case for rebalancing the U.S. economy after decades of widening inequality -– also a theme of the Sanders and Warren campaigns.

Those regions have seen manufacturing jobs disappear and incomes stagnate, making them fertile ground for the DSA, according to Fadhel Kaboub, an associate professor of economics at Denison University in Granville, Ohio. He says the president himself benefited from the same discontent in 2016.

“When Bernie and Trump spoke in the Rust Belt, they pinched a nerve that I haven’t seen pinched before: ‘I know your pain, and how that pain has been ignored by Republicans and Democrats’,’’ Kaboub says.

Socialists like Kelley Rose say that the pitch has to be tailored to local conditions — in her case, Fairmont in West Virginia, one of the poorest U.S. states.

“The super-hip millennials in Brooklyn are fantastic,’’ she says. “But they’re not going to change a 65-year-old retired coal-miner’s mind.’’

Rose says the strike by 20,000 West Virginia teachers last year, which shut down schools and won a pay-raise, made the state more promising ground for the DSA.

Most members of her chapter, set up more than a year ago, are new to political stumping. They’ve learned what works and what doesn’t as they go along. It’s a mix of the conventional playbook — door-knocking, movie nights –- with some innovations thrown in.

Like brake-light clinics, popular with DSA activists across the country. As Rose tells it, they’re simple and effective. A few volunteers set up shop on some unused parking lot, put up signs advertising free checks and repairs, and the cars roll in.

Drivers might hang around for free donuts and coffee, and browse some pamphlets on Medicare for All or the next DSA meeting. Conversations get underway –- not about socialist theory, but concrete problems that affect the community, like opioid addiction. “What we’re trying to do is dispel the red-scare myth,’’ says Rose…

The preferred tactic on the doorstep is to address concrete material needs, like universal health-care and a higher minimum wage, says Dan Fontaine, a first-time candidate who ran for state office as a socialist Democrat in Connecticut last year.

“If you go there and put forward these ideas, ‘We’re socialists and we wanna talk to you about socialism,’ then people scratch their head,’’ says Fontaine, who lost his race but outperformed the previous Democratic challenger. “They see it on TV, and it’s loaded –- no one knows what it means.’’

Socialists are terrible about economics and the best structure for society but they are very skilled at tactical recruitment. The Bloomberg report is not a good sign.