NEW YORK (August 28th) – Walmart (WMT) should abandon any plans to pursue a bid to purchase TikTok in partnership with Microsoft (NASDAQ:MSFT).

As with many things from the Middle Kingdom under its communist rule, not everything is as it appears. Indeed, selling off TikTok’s US operations may be a feint by the company that operates TikTok as well as the Chinese sister version of the app, Douyin (抖音 dǒ uyīn). The latter has superior technology and is far better positioned for e-commerce than TikTok.

Walmart announced earlier this week that it was planning to join Microsoft in the purchase of Internet media video streamer TikTok. The announcement, which passed the ticker on August 27th, has boosted Walmart shares 7.7% from the close August 26th to today’s close.

Conventional wisdom is that TikTok will be valuable to Walmart in much the same way that the Home Shopping Network was expected to boost retail sales back in the 1980s and the way that Facebook and Twitter allowed click-thru ads to retailers’ shopping sites in the social media era.

Moreover, Walmart hopes to buy into an internet video streamer that will allow it to access a millennial and higher income demographic who make up the majority of TikTok users, as illustrated here: 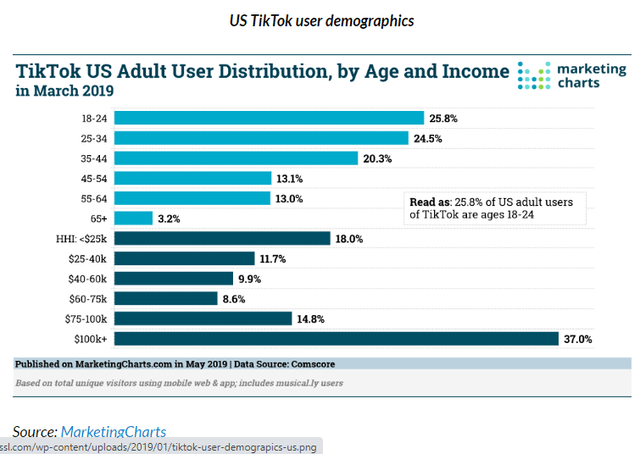 But as every follower of social media knows, “the next big thing” in social media can often be right around the corner. Popular social media platforms can be subsumed by better coding or simply because they fall out of fashion. (MySpace, anyone?)

And that may be the problem with buying into TikTok as an e-commerce platform.

It is already obsolete.

In China, TikTok is known as Douyin (抖音 dǒ uyīn). The parent company, ByteDance (BDNCE), runs both platforms. But the platforms are not identical. As discussed here,

“Though it remains broadly similar to TikTok, Douyin has become more advanced than its global counterpart, particularly with respect to ecommerce. With three taps on Douyin, you can buy a product featured in a video; you can book a stay at a hotel after watching a video shot there; you can take virtual tours of a city’s stores and restaurants, get coupons for those establishments, and later post geo-tagged video reviews.”

As you can see from this Twitter post, Douyin can also highlight a user’s face to see all the videos in the user’s library or zoom in on a product the user has featured in a video and buy it directly off the Douyin app.

Clearly, this is a far superior e-commerce platform than TikTok.

Investing in obsolete or obsolescent technology is never a good idea. Ask those who bought into buggy whip makers. Or Yahoo.

One can easily imagine ByteDance doing an end-around the Walmart-TikTok purchase by entering into an exclusive license agreement for its Douyin platform with Amazon (NASDAQ:AMZN), Target (NYSE:TGT), or some other large competitor, or even Walmart (for more money, of course.)

In any event, we think the business model of a retailer owning TikTok or Douyin is probably a mistake. A better model would be ownership (or an exclusive license) by a multinational media company that can earn royalties on each sale made through the platform. Controversial talk radio host Rush Limbaugh is widely rumored to have used a similar model when he syndicated his program in the 1980s. For the United States market, there are still the security concerns that were associated with TikTok.

The Trump administration’s concerns about ByteDance security are clear and more than reasonable. Like many tech companies in CCP-ruled China, including American companies, ByteDance is obsequious to CCP demands. Writing in the Lawfare blog, Jordan Schneider, China expert, said of TikTok:

“…China’s national intelligence law, according to one interpretation, gives total authority to the government to compel firms — and with no independent judiciary, even extralegal pressure is very hard to resist. CCP regulators can take massive bites out of market capitalization at will, and have in the past thrown ByteDance senior leadership in jail on corruption charges. This makes keeping officials at home happy ByteDance’s first priority, regardless of reputational risks abroad.”

Were Douyin to enter the US market, these security concerns would have to be addressed anew, as with TikTok with, perhaps, another sale of ByteDance US operations. But – as of now – what’s to stop ByteDance doing some “one-upmanship” against the Walmart purchase?

A Walmart purchase of TikTok is a bad idea. Share appreciation over the last two days built upon the supposition that Walmart will follow through with the deal are illusory. We think Walmart will eventually abandon the notion once it has completed its due diligence and we expect the share price appreciation attributable to those suppositions will recede.

NOTE: Our commentaries most often tend to be event-driven. They are mostly written from a public policy, economic, or political/geopolitical perspective. Some are written from a management consulting perspective for companies that we believe to be under-performing and include strategies that we would recommend were the companies our clients. Others discuss new management strategies we believe will fail. This approach lends special value to contrarian investors to uncover potential opportunities in companies that are otherwise in a downturn. (Opinions with respect to such companies here, however, assume the company will not change). If you like our perspective, please consider following us by clicking the “Follow” link above.

Additional disclosure: The views expressed, including the outcome of future events, are the opinions of the firm and its management only as of today, August 28, 2020, and will not be revised for events after this document was submitted to Seeking Alpha editors for publication. Statements herein do not represent, and should not be considered to be, investment advice. You should not use this article for that purpose. This article includes forward looking statements as to future events that may or may not develop as the writer opines. Before making any investment decision you should consult your own investment, business, legal, tax, and financial advisers. We associate with principals of Technometrica on survey work in some elements of our business.