Walmart Should Take All Of This New Cash And Beat Everyone (Including Costco) Into This Hyper Growth Country (NYSE:WMT)

Home Financial news Walmart Should Take All Of This New Cash And Beat Everyone (Including Costco) Into This Hyper Growth Country (NYSE:WMT)
2020-08-232020-08-23By finanz.dk

The latest quarterly earnings reports from retail giants Walmart (WMT), Amazon (AMZN), Target (TGT), and Costco (COST) seem to indicate that these businesses are the places to be in the post-COVID world. Examples of recent headlines include:

As it comes to great short term cash windfalls and how that trickles down (or doesn’t) to investor returns, it pays to watch capital expenditures and the capital allocators (you know, the CEOs) in order to evaluate– whether, or not– you’re gonna get your fair share.

As an example, and as I pointed out in my latest article about Amazon, AWS, and its Big Q2 Wins, CEO Jeff Bezos announced a plan for huge capital expenditures, even for Amazon’s standards:

“Even in this unpredictable time, we injected significant money into the economy this quarter, investing over $9 billion in capital projects, including fulfillment, transportation, and AWS.”

Were that pace to be continued for the entire fiscal year, shareholders would expect reinvestment of around $36 billion, which absolutely dwarfs recent Property, Plant and Equipment purchases over the last 3 years (as reported from AMZN’s latest 10-k), about $12B – $16.9B per year: 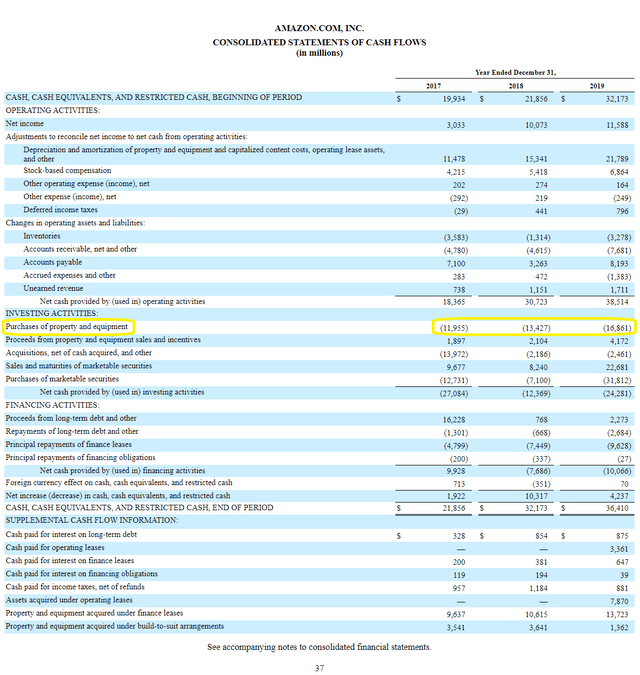 So what’s Walmart going to do as a response? At least as it stands YTD, Walmart’s previous investments seem to be paying off from an ROI standpoint (as reported in the latest earnings call presentation): 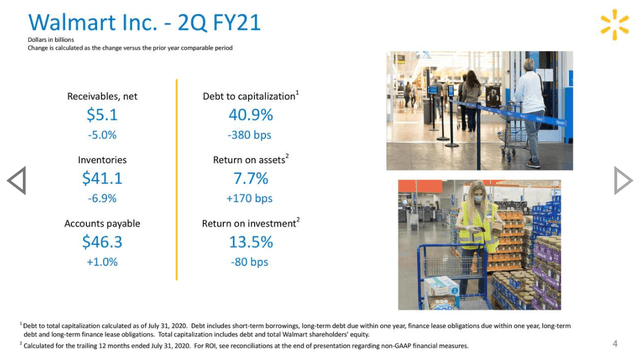 At first glance, it may seem like Walmart is holding on to cash rather than deploying strategically as Amazon is now doing, as capital expenditures YTD total only $3.6 billion, down -$1.3 billion YOY from last year. However, as management explains:

Then on working capital, and then just how we think about capital allocation in general, it really hasn’t changed. We’re going to continue to support the business, our CapEx down a little bit, but I would think about that more is timing, just not wanting to interrupt our stores with everything that’s going on. We have built up a little more cash than normal, and some of that just because we’re generating more cash than we have in the past, but also it’s not a bad time to have a little bit of extra cash on hand as opportunities come about and just ensuring that we protect the business but wouldn’t — as far as I would say about capital allocation, I wouldn’t view any changes in that.

How management chooses to use its fresh inflow of cash (+$5.1 billion in 2Q FY21) over the next several years could very well shape returns for investors over the next 5 years as it struggles for market share against the other big players (Amazon obviously, Target, and Costco). What I really want to zoom-in on is the potential across the way, where Walmart could benefit from an aggressive first-to-market approach into international territory, and particularly India.

To say that India has been hit hard by the Coronavirus would be an understatement. Just a snippet of news articles about the country (bolded emphasis mine):

During some of the worst parts of the COVID lock down, manufacturing activity came to a screeching halt:

The services purchasing managers index plunged by 43.9 points to 5.4 in April, the lowest in the world, hitting single digits for the first time and staying below 50, the dividing line between contraction and expansion, according to data published Wednesday by IHS Markit. The services sector makes up more than half of India’s gross domestic product.” —Bloomberg

Now, the country is on the rebound– having stepped up manufacturing and economic activity since some their low points during the lock downs– but the heavily populated country of over 1.3 billion still has a long way to go towards getting back to hyper growth. If there was ever a time to “buy low”, or “when blood is in the streets”, wouldn’t this be one of the best times to do it?

And in contrast to China, which is facing adversity and political pressures from the top developed countries in the West all across the board, India and its democracy has been seen as very friendly to the West and is swallowing up American investment capital.

Walmart (and Sam’s Club) vs Costco

In fact, Walmart has already targeted India with its majority stake (worth as much as $16 billion) in Flipkart, a platform that grew 45% YOY, and as recently as July added to its involvement through a $1.2 billion round of fundraising, shortly after Google announced its $10 billion investment in the digitization of India– all of which was preceded by Amazon’s $1 billion in the country earlier in the year.

Let’s look at a couple of big picture statistics that can be sourced directly from the latest 10-k’s from Walmart and Costco.

I don’t see how Sam’s Club can grow much into Costco’s space, so to say, from here. I mean sure, there will be regional gaps here and there, but from a big, secular growth picture there’s no obvious highly scaleable potential or advantage between one company or the other.

But let’s expand to the international picture. For Costco (from their 10-k): 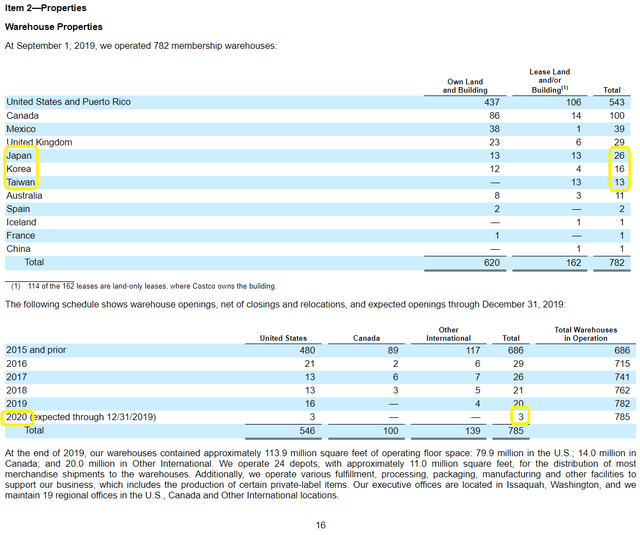 The expansion into Korea is one example of the type of move that gets fanfare from investors, but it seems from this snapshot that the APAC region is at least on the radar and an area that management has focused on at least in the past, in addition to the usual North American plays like Canada and Mexico.

As it stands, the presence for Costco (by Warehouse Properties): 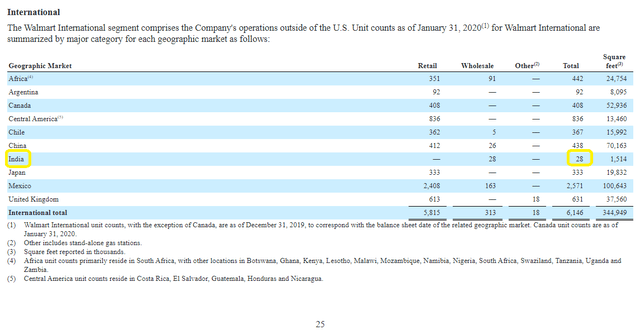 But I think the dollar bills, especially $16+ billion, speak a thousand words and that it makes sense to follow where the money has gone lately. With a first-to-market advantage and an invaluable eCommerce tool like Flipkart at their disposal, who’s to say that Walmart (with Sam’s Club) couldn’t pioneer the subscription warehouse model in India first– even if they have to start at smaller margins or pedestrian sales on an nominal basis.

Whether it’s a huge roll-out of Sam’s Club into India, or even just a continually aggressive expansion with its Walmart International stores– this use of expanded free cash flows would fall generally in-line with management’s capital allocation plans of the past, with International Capex making up almost 30% of spend in 2020:

In regards to more recent capital allocation, it seems that Walmart U.S. and Walmart International have represented a higher percentage of capital expenditures in relation to sales than Sam’s Club has been:

But, maybe there’s value in building up the Walmart model in fresh locations first and then possibly bringing Sam’s Club into it on the tail end. As far as what we can tell from the outside today, management sounds like they are keeping steady to their capital expenditure plan, in a time where companies across the globe are reigning those in. While competitors like Amazon, Target, and Costco have fresh profits to do the same, that’s not to say that these big giants couldn’t expand on markets internationally and build up those markets while others (like competitors in India) are paring back.

I’m going to use a reverse DCF to try and quantify what investors are currently pricing in with WMT’s stock today with 2 different FCF estimates (based on a Trailing Twelve Months). You can argue with my reasoning for doing this, as there are mixed opinions on the length of continued lock downs and the upcoming, more permanent shifts to consumer behavior. By all means, feel free to argue about that in the comments.

As far as the discount rate to use, the stock has a posted WACC by Gurufocus of 3.13%, but this is primarily due to a very low beta. I won’t go lower than a 6% discount rate in most of my valuation models, and so I’ll use that here, which assumes a risk-free rate close to 0.5% – 1% on a beta of 1.0 and market risk premium of 5-6%.

There’s a lot of flexibility on free cash flow estimates and growth rate estimates especially in an uncertain time like this, and even the discount rate could be put into question (possibly adjusted lower as the Cost of Debt for the firm is also below 4%).

To say that the stock is fairly valued today wouldn’t be too far off based on 2017-2019 free cash flows, but with the big caveat that substantial growth in the 7-10% rate continues smoothly looking forward. Free cash flow estimates would have to also be strong in regards to no hidden or misleading figures that were unaccounted for.

But as it stands, Walmart can provide a long term play not just from the cash windfalls of today but also for the long term growth potential of its international segment, if executed properly.

I’ve written before on the importance of geographic diversification, and an investor lacking in these areas can get some currency exposure to emerging markets, while participating in the growths in those same markets, by investing in those that export to them. Walmart– with Flipkart, and if they choose to, Sam’s Club– would give an investor that level of exposure while also providing a suitable dividend in a company with a relatively strong financial position.

***If you’d like more deep dives into company filings like this one, please do consider Following my profile with email alerts. To see how my picks for the Real Money Portfolio have done, check out: Post-Pandemic Performance***