Walmart Knocks It Out Of The Park (NYSE:WMT)

It was a quarter to remember.

On May 19th, Walmart (NYSE:WMT) delivered impressive fiscal 1Q21 results. The company’s performance was clearly influenced by the COVID-19 crisis, but the net-net financial impact was overwhelmingly positive.

Analysts seem to have been caught by surprise. Total revenues of $134.6 billion smashed consensus by the widest margin on record. Adjusted EPS of $1.18 also topped estimates, but by a lesser extent due to some unfavorable operating margin dynamics. 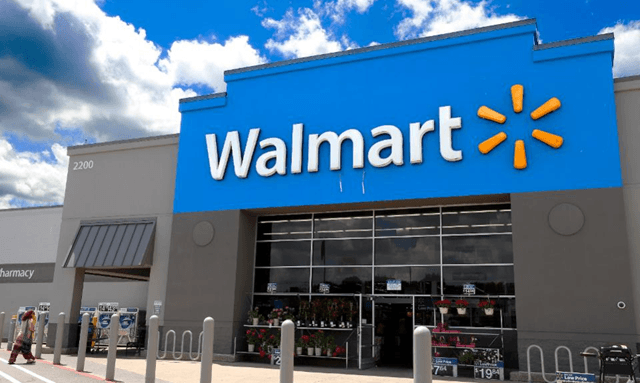 Walmart had been having a solid fiscal first quarter before the virus began to spread globally. In February, comps of 3.8%, the highest seen since the quarter ended January 2019, looked quite robust. But then March came and the “pantry loading” phenomenon pushed sales through the roof. Comps for the month were up a staggering 15%, propelled by food, consumables, health and wellness.

What may have caught analysts and investors by surprise (and me, for sure) were April results. Although sales slowed down in the beginning of the month, they re-accelerated to something that resembled March levels in the back end. Comps for April approached 10%, and the management team credited the increase to customers spending their government stimulus money. I believe that the bulk of the revenue beat must have come from these last two weeks of the quarter.

The novel coronavirus pandemic broke Walmart’s comps and e-commerce chart. Total US comparable sales rose by a previously unimaginable 10%. Number of transactions dropped by quite a bit and for the first time since fiscal 2017 at least. However, average ticket soared, as shoppers consolidated their purchases into less frequent trips to the store. E-commerce sales growth surpassed 70% for the first time since I started covering the company. 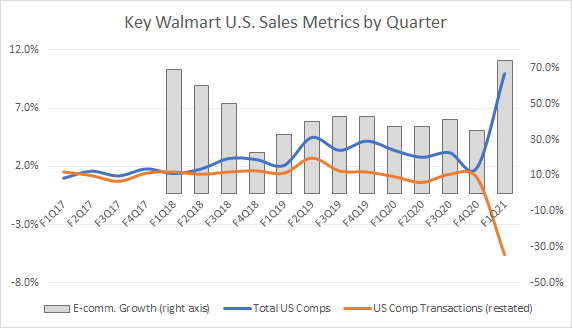 Further down the P&L, margins suffered due to a few factors. First, e-commerce and fresh produce tend to carry lower margins, and these were two key drivers of top-line strength last quarter. Second, crisis-related costs associated with store maintenance increased. However, operating leverage achieved through substantially higher revenues helped to offset these headwinds.

In the end, adjusted EPS growth of nearly 5% looked good compared to the slight bottom-line decreases witnessed in the past few quarters. An impressive free cash flow of $5.3 billion nearly quadrupled YOY, driven primarily by substantially lower inventory levels that led to a reduction in working capital. I expect this number to normalize at some point in the current year.

This expensive stock is a buy

Walmart shares headed higher immediately following the release of the earnings report. But the stock lost steam during trading hours on Tuesday.

Driving the mixed market reaction could be the belief that fiscal first quarter results were a coronavirus-driven fluke, and that Walmart will eventually return to its snail-like growth pace. Maybe the company’s decision to withdraw full-year guidance did not sit well either. It is also possible that a few shareholders and traders have chosen to “sell the news”, now that WMT has risen in value by a respectable 6% year to date. See valuation graph below.

I, on the other hand, remain bullish. True, it will be hard for Walmart to ever top its fiscal 1Q21 performance. But the same reasons that attracted me to this stock in February remain in place.

WMT has proven to be a great diversification tool inside an equities portfolio, a benefit of the cycle-agnostic sector and business model. Beyond macro factors, I also believe that Walmart’s management team has been taking the right steps to ensure that the company remains relevant in the age of e-commerce.