Walmart and Home Depot have pulled further away from their struggling rivals in US retail as figures showed how shoppers have turned to them during the pandemic while shunning shopping malls and department stores.

Earnings released on Tuesday cemented the two companies’ status as corporate winners from the coronavirus crisis as consumers spent billions of dollars more than usual at the two chains.

Gains were particularly strong at Home Depot, the world’s biggest home improvement chain, which generated $33.5bn in revenues in the three months to November 1, a year-on-year increase of 24 per cent on an organic basis.

At Walmart, higher sales both online and in bricks-and-mortar stores helped the world’s biggest retailer produce total revenues of $134.7bn in the three months to October 31, a year-on-year increase of 5.2 per cent.

The results stood in contrast to gloomier macroeconomic data also released on Tuesday. US retail sales ticked up just 0.3 per cent month on month in October, missing economists’ forecasts.

On a year-on-year basis, gains at groceries, building material stores and motor dealerships helped overall retail sales rise 5.7 per cent, but sales fell about 12 per cent at clothing and department stores.

While Americans are making fewer visits to Walmart stores amid the pandemic, they are spending more on each trip. Transaction volumes in the US declined 14 per cent, yet the average spending jumped 24 per cent.

The big-box chain’s food business has benefited as consumers have been less willing to visit restaurants and cooked more often at home. Shoppers have also turned to Walmart for electronics, clothing and other general merchandise, choosing it over shopping malls and department stores.

Walmart said there had been increased demand for products “across multiple categories”, fuelling a 6.4 per cent increase in like-for-like sales at Walmart’s domestic business and a 79 per cent jump in US ecommerce sales. Like-for-like sales also rose 11.1 per cent at Sam’s Club, its warehouse club division.

Margins also improved, and net income increased from $3.32bn to $5.2bn. The forecast-beating results sent shares in Walmart, which have already gained 28 per cent this year, up another 1 per cent in pre-market trading.

Although Walmart’s performance remains among the strongest in US retail, it was not as stellar as the previous quarter, when like-for-like sales in the US jumped 9.3 per cent. 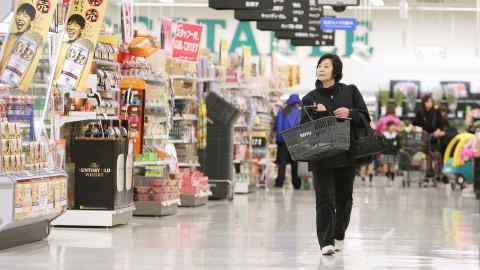 While describing Walmart’s overall figures as “very solid”, Neil Saunders, retail managing director at the GlobalData consultancy, said the company was “no longer being boosted by uniformly higher spending across all the income groups it serves”, in part because of the phasing out of more generous unemployment benefits.

The reduced frequency of shopping trips also meant Walmart was “starting to miss out on some impulse purchases”, he added.

There was little sign of a slowdown at Home Depot, however, as a boom in DIY extended into the autumn. Housebound consumers are undertaking more maintenance projects and making bigger investments in their homes.

Shoppers have flocked to Home Depot’s near-2,300 stores for supplies, and the company’s net income rose from $2.8bn to $3.4bn, equivalent to $3.18 per diluted share.

Home Depot this week struck a deal to acquire its former subsidiary HD Supply for $9.1bn, increasing its presence in wholesale distribution in a sign of the options open to companies whose sales have surged during the pandemic.

The company is also distributing some of the proceeds from higher sales to workers. On Tuesday, Home Depot said it would spend another $1bn a year on staff remuneration.